Dance and health has been subject of a number of research studies which show dance to be a very healthy exercise. However there are a number of health risks of professional dance which require careful attention. As part of courtship dance is a reliable indicator of the dancer's health and intelligence. 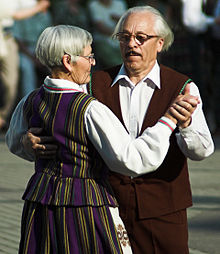 Being in general an aerobic exercise, dance brings well known benefits, such as reducing the risk of cardiovascular disease, weight control and other ones commonly associated with physical fitness. In addition, a considerable effect of dancing on psychological well-being is noted.

However, as Arts Council England noted in its 2004 address to the British House of Commons,[1] most evidence in support of these claims is of anecdotal character, and the Arts Council argued that "more needs to be done to demonstrate the specific and special benefits, and extend the delivery, of dance in a range of health contexts." Subsequently Laban did a study which indicated dance had a positive effect on physical fitness and psychological wellbeing and could be considered a valid alternative to sport.[2]

Dance pads have proven useful in tackling obesity in young people and are welcomed in many schools for that reason.[3]

A report by Professor Tim Watson and Dr Andrew Garrett of University of Hertfordshire compared members of the Royal Ballet with a squad of British national and international swimmers. The dancers scored higher than the swimmers in seven out of ten areas of fitness.[4]

An Italian study in 2006 has shown that dance is a very good exercise for heart patients compared to other aerobic exercises like cycling. This may be partly because the patients enjoyed it much more.[5][6]

A study in New York in 2003 has shown that cognitive activities like crosswords help ward off dementia but, except for ballroom dancing, most physical activities do not.[7][8]

A recent study done in Perth Western Australia by Debbie Duignan (WA Alzheimers Association) explored the use of Wu Tao Dance as a therapy for people with dementia. It was shown that Wu Tao, dance therapy that works to balance energy in the body, similar to Tai Chi, helped to reduce symptoms of agitation in people with dementia.[9]

A study at the Washington University in St. Louis School of Medicine in 2007 showed Argentine tango was better at improving the mobility of Parkinson's disease sufferers than an exercise class[10] (a later study showed similar benefits from Tai Chi). Because of the level of interest a permanent tango class was set up after the study ended.

A study by Dr Paul Dougall at Strathclyde University in 2010 concentrating on older women found that Scottish country dancers were more agile, have stronger legs and can walk more briskly than people of the same age who took part in exercises such as swimming, walking, golf and keep-fit classes.[11]

There are various health risks of professional dance, as it can be very demanding. As well as sports injuries, repetitive strain injury, and chronic workplace stress, dancers have a higher than average risk of body image problems and eating disorders.[12]

Even for social dance the use of a sprung floor is highly recommended.[13] Because a dance injury can ruin a career professional dancers are increasingly refusing to dance on anything else.

In ballet good plieing (bending the knees) on landing helps protect against knee injuries and shin splints. Many types of dance, especially folk dances, have hops in the steps where the impact of landing can be reduced by slightly bending the knee.

Warming up and cooling down exercises are recommended before and after exercises to avoid strain, muscle pains, and possible injury.[14]

Conditioning is a good way to prevent dance injuries.[15]

RICE (Rest, Ice, Compression, Elevation) is generally regarded as a good first aid therapy for most dance injuries before the ambulance comes, or even for what may be thought of as more minor injuries.[16] For minor injuries light exercises should be started after two days, if it is not definitely on the mend by this time then see a doctor.[17] Pain and inflammation can be reduced using a non-steroidal anti-inflammatory drug (NSAID) in a gel applied to the affected area (not on broken skin), note however that masking a pain to continue dancing is dangerous as it can easily make an injury very much worse.[13]

Dance has long been recognised as a way for prospective partners to select each other. Isadora Duncan said of dance that it needed 'the highest intelligence in the freest body'. Recent studies show how much can be conveyed by dance:

An article in Nature 'Dance reveals symmetry especially in young men' shows that dance in Jamaica seems to show evidence of sexual selection and to reveal important information about the dancer.[18][19] Professor Lee Cronk at Rutgers says: "More symmetrical men put on a better show, and women notice." Symmetry is a strong indicator of fitness as it shows developmental stability.

A Swedish study shows that people who score high on intelligence tests are also good at keeping time.[20][21]

Dance science is the scientific study of dance and dancers, as well as the practical application of scientific principles to dance. Its aims are the enhancement of performance, the reduction of injury, and the improvement of well-being and health.

Dance requires a high degree of interpersonal and motor skills, and yet seems built into humans. It has therefore increasing become the subject of neurological studies. The July 2008 edition of Scientific American contains a summary of recent studies and further questions.[22]

Dance therapy or dance movement therapy is a form of expressive therapy, the psychotherapeutic use of movement (and dance) for treating emotional, cognitive, social, behavioural and physical conditions.

Many professionals specialize in dancer's health such as in providing complementary or remedial training or improving mental discipline.[23] Mental discipline is achieved from dancing when you are learning a dance or choreographing a dance. And also when you need to recall a dance.[citation needed]

There is a large amount of governmental, health and educational information available extolling the benefits of dance for health.[24]