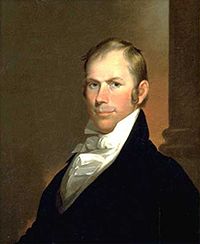 Speaker of the House Henry Clay 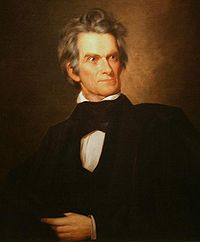 The Tariff of 1833 (also known as the Compromise Tariff of 1833, ch. 55, 4 Stat. 629) was proposed by Henry Clay and John C. Calhoun as a resolution to the Nullification Crisis. It was adopted to gradually reduce the rates after southerners objected to the protectionism found in the Tariff of 1832 and the 1828 Tariff of Abominations, which had prompted South Carolina to threaten secession from the Union. This Act stipulated that import taxes would gradually be cut over the next decade until, by 1842, they matched the levels set in the Tariff of 1816—an average of 20%.[1] The compromise reductions lasted only two months into their final stage before protectionism was reinstated by the Black Tariff of 1842.

The Tariff of 1828, enacted on May 19, 1828, was a protective tariff passed by the U.S. Congress. It was the highest tariff in U.S. peacetime history until that point, enacting a 62% tax on 92% of all imported goods. The goal of the tariff was to protect northern U.S. industries by placing a tax on low-priced imported goods, which had been driving northern industries out of business. Nevertheless, the South strongly resisted the Tariff of 1828 for several reasons. Firstly, they were forced to pay higher prices on goods that the region did not produce, and secondly, the reduced importation of British goods made it difficult for the British to pay for cotton imported from the South. In essence, the South was simultaneously forced to pay more for goods and to face reduced income from sales of raw materials.[2] These unfortunate results caused many in the South to refer to the Tariff of 1828 as the Tariff of Abominations.

Current Vice-President John C. Calhoun opposed the tariff and anonymously authored a pamphlet called the South Carolina Exposition and Protest, in which he urged nullification of the tariff within South Carolina.  The South Carolina legislature printed and distributed 5,000 copies of the pamphlet, but it did not take the pamphlet's suggested legislative action to nullify the Tariff of 1828, since many figured the tariff would be reduced with the election of Andrew Jackson.[3][4]

Nevertheless, Andrew Jackson's administration did not address the tariff concerns until July 14, 1832, when Jackson signed into law the Tariff of 1832. This tariff, written mostly by former President John Quincy Adams, reduced tariffs to resolve the conflict created by the Tariff of 1828. However, while Northerners essentially saw the tariff as a settlement, many Southerners merely saw it as a harbinger of things to come. The tariff, to them, was still unsatisfactory and needed improvement. In particular, the state of South Carolina vehemently opposed the tariff, leading to the Nullification Crisis.

The state, ready to defend itself from the government, began making military preparations to resist federal enforcement.[6] Meanwhile, Congress passed the Force Bill, which granted Jackson the ability to use whatever force necessary to enforce Federal tariffs.[7]

Shortly after the Force Bill was passed through Congress, Henry Clay and John C. Calhoun proposed The Tariff of 1833, also known as the Compromise Tariff, to resolve the Nullification Crisis. The bill was very similar to the Tariff of 1832, but with a few exceptions. Most importantly, the Tariff of 1833 guaranteed that all tariff rates above 20% would be reduced by one tenth every two years with the final reductions back to 20% coming in 1842. This essentially forced import tariffs to gradually drop over the next decade, pleasing South Carolina and other Southern states that depended on cheap imports.[8]

In addition, the Tariff of 1833 had some other notable impacts. First, it allowed many raw materials used by American industry to be admitted completely free of duty. In addition, it stated that all duties must be paid in cash, with no credit allowed the importing merchant. Some claimed that this was equivalent to an additional 5 percent on tariff rates.

Many believe that were it not for the Force Act, South Carolina may have continued its Nullification policies because the Force Act gave the United States government the ability to use military force to enforce tariffs and other economic policies, which posed a clear threat to South Carolina. Though the exact impact of the Force Act on South Carolina's decision to accept the Tariff of 1833 cannot be measured, there is no doubt that it made fighting for nullification a potentially devastating choice. Ultimately, the House passed the Tariff of 1833 by a vote of 119-85 and the Senate passed it by a vote of 29-16.[9]

The Tariff of 1833 was ultimately abandoned in favor of the Black Tariff of 1842, and protectionism was reinstated. Average tariff rates nearly doubled from the initial 20% target for 1842 to about 40%, and the percentage of dutiable goods jumped from about 50% of all imports to over 85% of all imports. For some goods, such as those made with iron, the import tax constituted about two thirds of the overall price of the good. Unsurprisingly, the impact of the Black Tariff of 1842 was immediate: as the cost of imports jumped, there was a sharp decline in international trade in 1843.