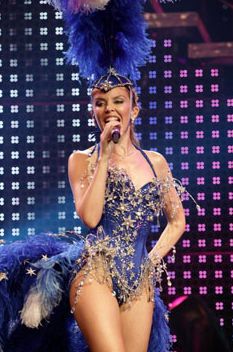 Minogue began recording with pop production trio Stock, Aitken & Waterman in 1987, and achieved a string of hit records throughout the world, most notably "", her cover of "" (both 1987) and "" (1990). After four studio albums and a record, Minogue signed a new deal with Deconstruction in 1993. During this period, she attempted to distance herself from her earlier work and enjoyed greater artistic control. She experimented with different genres, including and -based dance, while producing more serious and mature lyrical themes. Although record sales for Minogue were considerably low during this period, singles such as "Confide in Me" (1994) and her duet "" (1995) became worldwide hits.

In 1999, she signed to and returned a year later with a more traditional sound to greater success. However, it was not until she released the single "" in 2001 that her international appeal became widespread. The single and subsequent album, "Fever", become the most successful of her career.Her new album X was a hit in Europe and Australia and sold over a million copies worldwide.She is the third best selling female recording artist in the UK with certified album sales of 8,765,000. [http://www.bpi.co.uk/] She is in third place behind Madonna and .