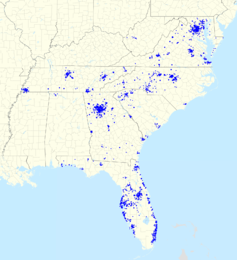 SunTrust locations in the United States. 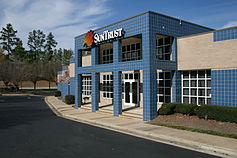 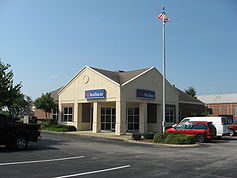 A SunTrust Bank in Hendersonville, Tennessee

SunTrust Banks, Inc., is an American bank holding company. The largest subsidiary is SunTrust Bank. It had US$172.7 billion in assets as of September 30, 2009.[4] SunTrust Bank's most direct corporate parent was established in 1891 in Atlanta, where its headquarters remain.[1]

On December 12, 2006, it was announced that SunTrust signed an agreement with InfiCorp Holdings of Atlanta to manage SunTrust's consumer credit card portfolio. The portfolio had been managed under an agreement with MBNA Corporation since 1999, but MBNA was acquired by SunTrust's competitor Bank of America on June 30, 2005. SunTrust will retain the option to purchase card assets from InfiCorp if it desires to add to its own loan portfolio. InfiCorp Holdings is a subsidiary of First National of Nebraska.[6]

In 2007, the bank was one of the first major U.S. institutions to experience a stock value decline, bottoming out at $9.06/share in February 2009 from a high of $90.61/share on May 22, 2007.[8] They took part in the federal government's Troubled Asset Relief Program[9] and ultimately were investigated for executive compensation.[10]

In 1986, shortly after the Trust Company–SunBanks merger, SunTrust purchased Third National Corporation of Nashville, though it continued to use the Third National name in Tennessee until 1995. It purchased Crestar Financial Corporation of Richmond, Virginia (successor of Farmers Bank) in 1998.[1] In 2001, SunTrust launched a hostile takeover bid for Wachovia Corporation, after Wachovia announced its intention to merge with First Union Corporation.[11] This attempt was unsuccessful. It did, however, purchase the retail banking operations of Huntington Bancshares in Florida in 2002;[12] SunTrust and Huntington continue to compete in the Charleston, West Virginia market today.

The company bought Memphis-based National Commerce Financial Corporation (NCF) for $7 billion in 2004. The bank operated as National Bank of Commerce in South Carolina, Tennessee, Mississippi, Arkansas, Alabama, Georgia, Virginia and West Virginia and as Central Carolina Bank and Trust in North Carolina. This acquisition allowed SunTrust to enter North Carolina and West Virginia for the first time, and substantially increased its footprint in the other states.[13]

On November 2, 2007, SunTrust Bank announced that it will acquire GB&T Bancshares for $154 million. Under the agreement, GB&T shareholders would receive 0.1562 shares of SunTrust stock for each share of GB&T stock held. SunTrust doesn't anticipate the transaction, expected to close in the second quarter of 2008, to affect 2008 earnings. If completed, the merger would integrate the GB&T franchise primarily into SunTrust's Atlanta banking region, where it operates 212 branches.

SunTrust Banks was the eighth largest bank at the end of 2008 as an individual bank. (Not including subsidiaries) 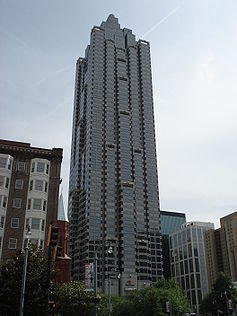 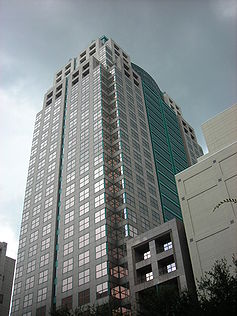 SunTrust has a long-standing relationship with The Coca-Cola Company. The Trust Company of Georgia helped underwrite the initial public offering of The Coca-Cola Company in 1919.[7] As a result, the bank received some of Coke's publicly traded stock, and SunTrust retains 48.3 million shares (3.58%) of Coke as of 2006. This stake, which has a GAAP cost of $110,000, is today worth approximately $2 billion and pays $59 million a year in dividends. In addition, the original copy of the formula for Coca-Cola is stored in a safe deposit box of a SunTrust location in Atlanta.[16] Ernest Woodruff, president of the Trust Company from 1904 to 1922, was the father of Robert W. Woodruff, Coca-Cola's president from 1923 to 1954 and board member until 1984. As of 2007, two Coca-Cola executives sit on SunTrust's board of directors[17] and a former SunTrust CEO sits on Coca-Cola's board.[18]

Located at 200 South Orange Avenue, The SunTrust Center is the tallest building in downtown Orlando, Florida. The 35 story, 650,000 sq ft (60,000 m2) building was built in 1988 at a cost of approximately $100 million.[citation needed] It is constructed of reinforced concrete and granite with marble finishes and features 17 elevators.