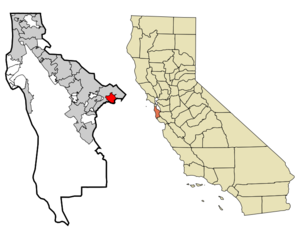 As of the 2000 census, the population of East Palo Alto was 29,506 (31,915: 2003 estimate). It is situated on the , roughly halfway between the cities of San Francisco and San Jose. To the east is the , and to the west the prosperous city of Palo Alto. While East Palo Alto is still widely assumed to be part of the city of [cite news
url=http://www.epa.net/info/epa_history.html
title=The History of East Palo Alto
date=accessed
publisher=EPA.net website] [cite web
url=http://www.ci.east-palo-alto.ca.us/publicworks/EastPaloAlto2005UWMPFinalComplete.pdf
title=City of East Palo Alto 2005 Urban Water Management Plan
publisher=City of East Palo Alto
format=PDF
date=
pages=page 14] , it has always been a separate entity from Palo Alto, even before it became incorporated as a city, with an entirely different makeup. Though the two cities are separated only by , they are worlds apartFact|date=September 2008 culturally and economically. Although they are in different counties, East Palo Alto and Palo Alto share both telephone area codes and postal s.

East Palo Alto has an unenviable reputation for crime and poverty, a reputation well deserved during the 1980s and early 1990s (in 1992, the city had the highest per-capita murder rate in the country with 42 murders [cite news
url=http://www.stanforddaily.com/tempo?page=content&id=7291&repository=0001_article
title=East Palo Alto regarded as 'drug haven'
pubisher=The Stanford Daily
date= ] ). Since then the city's crime problems have somewhat subsided, thanks in great part to an extremely proactive police chief and department. The prosperity that benefited the during the dot-com boom of the late 1990s largely bypassed East Palo Alto. The , which serves East Palo Alto and part of adjoining Menlo Park, has struggled with low academic performance and allegedly corrupt leadership. Eventually, however, the Peninsula's shortage of land and soaring property prices meant that even East Palo Alto became an option for urban regeneration. Until recently, has been rare in East Palo Alto. East Palo Alto was depicted in the 1995 film , which was based on the experiences of a teacher and her experiences with bussed in students from East Palo Alto.

East Palo Alto also includes a small piece of land across the (US 101) from the shopping center, a roughly triangular area between US 101 and the San Francisquito Creek, which includes a former two-block-long retail business district known as Whiskey Gulch. (The name dates back to the time that , in Palo Alto to the west, was dry and prohibited alcohol sales within a radius of one mile (1.6 km) from the campus: Whiskey Gulch was just outside the limits, and was home to a number of liquor stores and bars.) The city has torn down Whiskey Gulch and replaced it with the University Circle office complex. ["Environmental Impact Report for the University Circle Redevelopment Plan", Report EMI7770, City of East Palo Alto] A 200-room Four Seasons hotel opened in University Circle in 2006 after numerous delays to serve the Silicon Valley market. The new hotel is being promoted as the most lavish and luxurious full-sized hotel available in the mid-Peninsula and West Valley area, but has had problems with physically settling into the marshy bay landfill on which it was built (evidence of this was not noticed until windows built for it would not fit into their frames).

The tribe of Native Americans inhabitated this area at least by 1500 to 1000 BC. One was discovered in 1951 during development of the University Village subdivision near today's Costaño School. After a year-long excavation of 60 graves and 3000 artifacts, researchers concluded Native Americans had utilized the area as a and camp, rather than as a permanent settlement. In later years another mound was found near Willow Road and the railroad right-of-way. [ [http://www.romic.com/epahistory/frame.htm Native American History of East Palo Alto] ] From the 1850s through the 1940s, East Palo Alto went through many changes. In 1849, Isaiah Woods attempted to make East Palo Alto a major shipping town and named the city Ravenswood. In 1868, after Woods investments failed he sold the wharf to Lester Cooley who built a brick factory. When the brick factory closed down it reverted to a simple farming community. With the onslaught of WW I the north side of East Palo Alto became a military training ground with only the V.A. hospital in Menlo Park still existent. In the 1940s East Palo Alto was a farming community with many Japanese residents. During the war the Japanese were forced to internment camps and they lost their land, belongings, livelihoods and dreams. After the war many African-American families were diverted to EPA and during the civil rights movement of the 1960s there was a cultural re-awakening. The city was almost renamed in 1968 to reflect its population's African roots. [ [http://www.romic.com/epahistory/frame.htm] [ [http://www.epa.net/info/epa_history.html Acceptable Use - The History of East Palo Alto] ]

In the early twentieth century, EPA was a diverse community, racially and socially mixed,largely working class. In the early 1960s, a few real-estate brokers waged a campaign. When African Americans asked about buying a house, they were steered to EPA. Whenever a black family bought a house, the broker's card would appear in the mailboxes next door, reading: "A black family moved next door. Call me."Fact|date=February 2007 Predictably, this produced a supply of leads. A tipping point was quickly reached: within a few years, EPA became mostly black.

Significant occurred in East Palo Alto from around 2000, with the construction of a large named Ravenswood 101 (including a and a , and a controversial Fact|date=October 2007 store) and several upscale housing communities (intended for high-earning Silicon Valley workers). This gentrification has faced opposition from local residents. Some residents charge that it serves to price locals out of one of the region's only affordable communities while providing only low-paying jobs in the retail developments and consuming a disproportionate amount of the tiny city's land area (2.5 square miles).

East Palo Alto has historically been at a economic disadvantage from its neighboring cities because of its limited tax base. While there is plentiful shopping and business outside East Palo Alto, there was relatively little inside East Palo Alto. Most of EPA was unincorporated county land so it was not eligible for many of the revenue benefits of being a city. Until 1983, East Palo Alto existed as an unincorporated "island" in San Mateo County, dependent on county government for services and on the San Mateo County Sheriff for police protection. After several years of pro-incorporation campaigning by local community groups, a 1982 ballot measure that was stopped by a lawsuit, and a subsequent election the next year, East Palo Alto became a city in June 1983. (Because of subsequent legal challenges to the last ballot measure, it wasn't until 1987 that the city was officially recognized as such. The legal challenges were led by former U.S. Congressman , who represented one of the real-estate brokers whose original campaign had turned EPA into a mostly-black .Fact|date=October 2007) The final tally was 1777 for and 1764 against, a margin of 13 votes; a majority of 50.2%. [cite web|url=http://www.epa.net/info/epa_history.html
title=The History of East Palo Alto
publisher=EPA Acceptable Use] As a result, East Palo Alto's incorporation is often cited in lists of close elections with the goal of encouraging voter participation. As an indication of the political orientation of those who formed the new city, one of the first actions of the city council was to propose a "strong" rent-control ordinance that was put up for a vote and passed, making East Palo Alto one of the handful of cities in California with such measures ("strong" meaning vacancy control, which prohibits rent increases when tenants move out of a rental unit. However, as recent court losses have shown, this Berkeley-like legal tactic is not holding up and more and more properties are being sold to large management companies who renovate and increase rent to recoup their investments.) [cite web
url=http://www.ci.east-palo-alto.ca.us/uploads/3474/City%20Council%20Resolutions%20Directory%20_Current_3.pdf
title=City of East Palo Alto Resolutions
publisher=City of East Palo Alto] .

Despite its name, East Palo Alto lies almost entirely north, and not east, of Palo Alto.It is bordered on the west by Menlo Park and Palo Alto, and to the east by the . The San Francisquito Creek defines its western edge. To the north are Ravenswood Point and the western end of the Dumbarton Bridge in Menlo Park.

There were 6,976 households out of which 47.3% had children under the age of 18 living with them, 48.2% were married couples living together, 19.8% had a female householder with no husband present, and 24.4% were non-families. 18.2% of all households were made up of individuals and 4.5% had someone living alone who was 65 years of age or older. The average household size was 4.20 and the average family size was 4.64.

East Palo Alto is bisected by U.S. Route 101, which has exits serving the city; a frontage road parallels both sides of this freeway fully controlled access facility. The Dumbarton Bridge connects East Palo Alto to , which lies to the east across . When the current bridge was planned in the 1970s, conducted extensive environmental research on the aquatic and terrestrial environment. Principal concerns of the public were and impacts, particularly in some residential areas of and . Studies were conducted to produce s of projected s and concentrations throughout the western approaches, for each alternative connection scheme. [C.M. Hogan, Leda Patmore, Harry Seidman et al., "Air Quality and Acoustics Analysis for the Dumbarton Bridge Replacement Project", ESL Inc., prepared for the Bay Area Civision of Toll Crossings (1973)]

East Palo Alto gets little noise pollution from the Dumbarton Bridge; however, it is close enough to Mountain View's to get nontrivial noise pollution during loud rock concerts.

The local area around the bridge is an important ecological area, hosting many species of birds, fish and mammals. The is known to be present in the western bridge terminus area.

East Palo Alto is the home of the Major Taylor Cycling Club, named after the famous African-American bicycle racer "Major" .

After 20 years without a supermarket, East Palo Alto individuals and organizations joined together to establish the East Palo Alto Community Farmers' Market [http://www.insidebayarea.com/news/ci_9449784?source=rss] .