Sweden in the Eurovision Song Contest 1961

Sweden in the Eurovision Song Contest 1961

Sweden chose their entrant for the Eurovision Song Contest 1961 through Melodifestivalen 1961. The song April, April, performed once with Siw Malmkvist, once with Gunnar Wiklund, won. However, none of them was considered acceptable for singing in ESC, so Lill-Babs was chosen as representative instead. In the contest, once more held in Cannes, she finished in 14th place (out of 16). 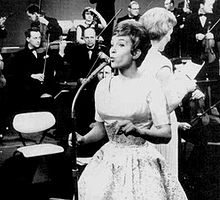 Melodifestivalen 1961 was the Swedish national final and it was the third time that this system of picking a song had been used. One singer performed the song with a large orchestra and one with a smaller orchestra. Approximately 550 songs were submitted to SVT for the competition. The final was broadcast on Sveriges Radio TV, but was not broadcast on radio. Siw Malmkvist won with "April, April" but Lill-Babs went to Eurovision.