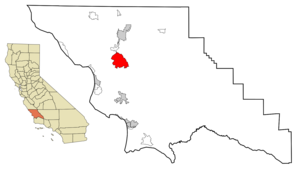 Atascadero is a city in San Luis Obispo County, , about from San Francisco and Los Angeles. Atascadero is farther inland than most other cities, and as a result, usually experiences warmer, drier summers and cooler winters than neighboring cities such as and . The current population is around 28,000.

Atascadero is primarily a residential and commercial community. The city has a somewhat rural character too, and it has many residential lots from convert|0.5|acre|m2 to about convert|5|acre|m2 in size. Some city residents keep livestock or grow agricultural crops on their property. The city's largest employer with approximately 1,800 employees is the , an all-male, accredited, maximum-security California state facility for the treatment of men with psychiatric illnesses, who have been convicted of a crime or have been found incompetent to stand trial. It was previously the only facility in the state penal system that dealt with sexually violent predators, but nearly all have now been assigned to the newer . Other significant employers include retailers and the municipal government.

The city is home to the at , which is the only zoo in the Central Coast area. The zoo is home to a variety of wild animals which can be seen for a nominal fee.

There were 9,531 households, of which 35.9% had children under the age of 18 living with them, 55.5% were married couples living together, 11.4% had a female householder with no husband present, and 28.5% were non-families. 22.0% of all households were made up of individuals and 8.1% had someone living alone who was 65 years of age or older. The average household size was 2.62 and the average family size was 3.05.

The City of Atascadero is a community located halfway between Los Angeles and San Francisco on , about convert|225|mi|km from each city. Atascadero is situated within an oak woodland off Highway 101 twenty miles (32 km) north of San Luis Obispo and convert|10|mi|km south of . Nearby CA Highways 41 and 46 provide easy access to the Pacific Coast and the Central Valley of California.

"ATASCADERO" (uh-task-a-DARE-oh), a Spanish name which, loosely translated means (from the verb "atascar" which means to get stuck or to hinder) was originally home to the Salinan Indians. In the half century between 1769 and 1823 the Spanish Franciscans established 21 missions along the California coast, including the nearby Missions San Miguel Archangel, and San Luis Obispo de Tolosa. In 1821, Mexico won its independence from Spain, and California became a Mexican province.

Patrick Washington Murphy held ownership of convert|61000|acre|km2 at one time. Eventually, J.H. Henry became the owner of the Atascadero Rancho. , a successful magazine publisher from the East, founded the community of Atascadero in 1913 as a , planned colony. He had previously created such a community, at . After purchasing the Atascadero Ranch in 1912, Lewis put together a group of investors from across the country, paid J.H. Henry $37.50 an acre, and celebrated acquisition of the Rancho on July 4, 1913.

"Atascadero's Tent City". As investors came to homestead the land that they had bought with their down payments, the area was transformed into a "tent city" with tents situated on land now occupied by Century Plaza and Bank of America. Lewis employed the services of experts in agriculture, engineering and city planning to develop his dream colony for the anticipated 30,000 residents. In 1914 the land was surveyed and subdivided. Thousands of acres of orchards were planted, a water system was installed, and construction began on an convert|18|mi|km|sing=on road (now Highway 41 west) through the rugged to the ocean (), where Lewis built cottages and a beachfront hotel called the Cloisters.

The first civic building in Atascadero, The Printery, had the first rotogravure presses west of Chicago. Lewis then published the Atascadero News newspaper and the Illustrated Review, a photo/news magazine. The centerpiece of Lewis' planned community was an Italian Renaissance-style building, which was the home to Atascadero City Hall and the Museum until it was damaged in the 2003 earthquake. Built between 1914 and 1918 with bricks made from local clay, this unique and beautiful building has become one of California's Historical Landmarks (No. 958).

Founded in 1913 by E. G. Lewis and incorporated in 1979, the as it was known at the time was originally envisioned as a model community. Little evidence of Atascadero's original architecture and urban design remain, as historic buildings and homes have been torn down to make way for more modern developments and the Sunken Gardens bisected by .

One of the few surviving examples of original urban design can be found, however, in the located near the Junior High School on Palma Avenue in the Sunken Gardens public park. Designed by of , construction was completed in 1918 at a cost of $180,000. It was the headquarters for the Atascadero Colony, built of reinforced concrete and locally produced brick, it had also served as a private school for boys, a veteran's memorial building, and county offices. Location: [http://maps.google.com/maps?f=q&hl=en&q=6500+Palma+Ave,+Atascadero,+CA 6500 Palma Ave, Atascadero]

This building was purchased by San Luis Obispo County in the 1950s as a Memorial Building. The building housed the county library, Atascadero Historical Social Museum and then the city offices following incorporation in 1979. The historic City Hall is adorned with a convert|40|ft|m|sing=on dome atop the third story, originally intended to house the library. The building was designated a . The City Hall was damaged by the magnitude 6.5 on the morning of December 22, 2003. The building is currently awaiting restoration and determination of FEMA funds toward that purpose.

Another fine example of Atascadero's early architecture is , built in 1929, located just west of the Sunken Gardens on El Camino Real, the city's main commercial street. Vacant since 1987, , a local businessperson, helped rejuvenate the derelict building with an estimates $15 million renovation project completed in 2003. [ [http://www.accessmylibrary.com/coms2/summary_0286-7527261_ITM The Tribune - http://www.accessmylibrary.com/coms2/summary_0286-7527261_ITM] ]

* [http://www.atascaderonews.com Atascadero News] is the official newspaper of Atascadero since 1916.