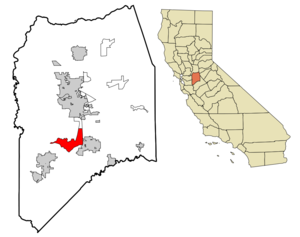 Lathrop is a city located in USCity|San Joaquin County|California. The population is currently 14,625. (2006)

There were 2,908 households out of which 51.1% had children under the age of 18 living with them, 65.9% were married couples living together, 13.4% had a female householder with no husband present, and 14.6% were non-families. 10.4% of all households were made up of individuals and 2.9% had someone living alone who was 65 years of age or older. The average household size was 3.59 and the average family size was 3.82.

Lathrop participates in the Sister City program and is tied to .

Lathrop sits aside , one of the major freeways in California and the major north-south freeway along the entire West Coast. Lathrop is located in the metro triangle, which is bounded by the , Stockton and Sacramento. Lathrop is centrally located within a 30-minute commute of Tracy, Manteca, Stockton, Lodi, Modesto, Livermore and Pleasanton.

Lathrop is strategically centered between the Stockton, Modesto and Tracy submarkets – all within a convert|20|mi|km|0 radius with a combined current population of nearly 750,000 and an expectation that this number will approach 1 million within ten years.

Over 40,000 vehicles per day commute over the Altamont Pass into the Bay Area for employment. There is a strong demand for housing from the Bay Area as residents are moving to affordability.

Central Lathrop Specific Planconvert|1540|acre|km2|0|sing=on site – west side of I-5, north of Louise Ave.Up to 6,800 dwelling units, including low density, medium density and high densitySite for power center and other retail uses along west side of I-5Nearly convert|4500000|sqft|m2 of office commercial in Lathrop’s I-5 regional commercial corridorEntitlement hearing scheduled for OctoberAnnexation being pursue