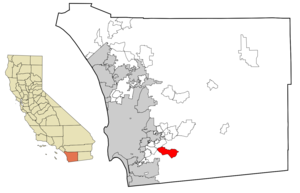 There were 1,762 households out of which 44.3% had children under the age of 18 living with them, 77.7% were married couples living together, 6.0% had a female householder with no husband present, and 12.5% were non-families. 8.5% of all households were made up of individuals and 3.5% had someone living alone who was 65 years of age or older. The average household size was 3.30 and the average family size was 3.48.

In 1999, the Tipai Band of Kumeyaay Indians, with 64 members living on six acres of sovereign land in the Jamul area designated the "Jamul Indian Village," announced their intent to develop a new hotel and casino. The original plan, which required the US government to annex 81 acres of surrounding land to complete the project, met with strong opposition from local residents. After the annexation effort was denied, the casino plan was revised to fit the six-acre reservation grounds. Despite continuing opposition from townspeople, a ceremonial groundbreaking took place on 10 December 2005.

The $200 million project is financed by [http://www.lakesentertainment.com Lakes Entertainment] of Minnesota. The casino's original concept was to be developed according to the State of California's gambling compact. Proponents emphasize increased revenue for the state and the tribe, as well as 2000 new jobs for all members of the community, while opponents fear strain on its police and fire services, a major impact on the local water supply, and argue that a 15-story building will permanently change the town's character. The chief concern is the increased traffic on the main road through the town, Highway 94. The proposed casino location is such that all the traffic to and from would likely pass through the middle of the town.

On Feb 7, 2003, the U.S. Bureau of Indian Affairs [http://jacjamul.com/Media/UnionTribune/20030207.html held a meeting] to discuss the environmental impact report produced by the Jamul Indian Tribe in support of the casino project. Hundreds of Jamul residents showed up to express almost unanimous opposition to the casino.

On Sept 13, 2006, casino organizers [http://www.signonsandiego.com/news/metro/20060914-9999-2m14jamul.html held a meeting] with the townspeople on site to address their concerns. The casino plan was further clarified, with an artist's conception of the proposed six story casino and 12-story hotel complex on display. A court reporter was on hand to receive comments for or against the proposal, and of the 40 who did so, three were in favor. Most of the negative comments were in regard to increased traffic on Highway 94, which narrows to a two-lane road at the proposed site of casino.

On Mar. 10, 2007, [http://jacjamul.com/Media/UnionTribune/20070311.html the tribe evicted three residents] (not tribal members) who had been living on the Indian Village land but who opposed the casino- Karen Toggery and her son and Walter Rosales. Local Jamulians gathered to protest the evictions. The Tribe hired a local security company and "deputized" them as "Jamul Tribal Police." These guards then utilized pepper spray and metal batons on some of the protestors who trespassed onto Tribal property and refused to leave. Tribal chairman Leon Acebedo [http://jacjamul.com/Media/UnionTribune/20070313.html signed an agreement] witnessed by local Board of Supervisors member Dianne Jacob that stipulated that the homes of the evicted would not be destroyed for at least seven days. The homes were demolished two days later, leading to considerable controversy in the community. An unrelated statement was released that same day stating that the tribal leaders no longer wished to negotiate with the state regarding the casino and were planning a casino with Class II games only- which do not include slot machines- as casinos with only Class II games are not governed by compacts with the State of California.

On October 1st, 2008 [http://www.signonsandiego.com/news/metro/20081009-9999-1m9jamul.html the tribe sued CalTrans] after months of unsuccessful negotiations. The tribe claimed their sovereignty gives them the right to use the land that they see fit. CalTrans maintained that they represent the public’s safety and that they will not approve the permits to put a stoplight in the middle of 94 unless more environmental impact studies are performed. The tribe continued to maintain that CalTrans’ preferred, safe alternative of building a driveway off a side road, Melody Lane, was “improper meddling by the state”. In the article sited above, a member of the tribe's Executive Council, Carlene Chamberlain, stated “The Minnesota company backing the casino, Lakes Entertainment, can't get funding for design and construction until it's clear that gamblers will be able to get to the slot machines.”. As the tribe appears unable or unwilling to meet CalTrans’ requirements, this lawsuit must be won by the tribe before the casino can be built.