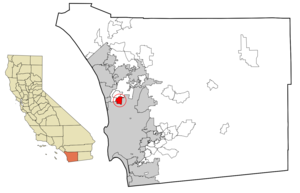 Fairbanks Ranch is a (CDP) in San Diego County, , . The population was 2,244 at the 2000 census. The entire population is contained within two , divided into North and South sections by the formerly private San Dieguito Road. It is commonly considered to be part of the area within San Diego County, and is even included within the proposed boundaries for the city of .

There were 734 households out of which 43.9% had children under the age of 18 living with them, 85.3% were married couples living together, 2.2% had a female householder with no husband present, and 10.8% were non-families. 7.9% of all households were made up of individuals and 2.6% had someone living alone who was 65 years of age or older. The average household size was 3.06 and the average family size was 3.20.

The area is noted for including the 92067 ZIP code, which is the second most expensive area for houses in the country.