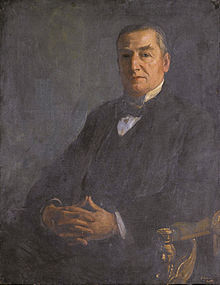 Sir Edward Denison Ross (June 6, 1871 – September 20, 1940) was an Orientalist and one of the world's foremost linguists, specializing in languages of the Far East. He could read 49 languages, and speak 30 of them. He was director of the British Information Bureau for the Near East. Along with Eileen Power, he wrote and edited a 26 volume series on India, The Broadway Travellers.[1] The series included the diary of the 17th century naval chaplain Henry Teonge. In 1934 Edward Denison Ross attended Ferdowsi Millenary Celebration in Tehran.