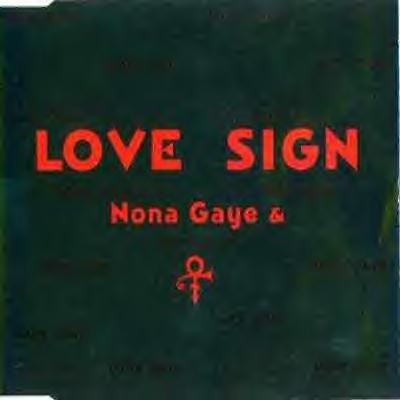 "Love Sign" is a track from the "" released by Prince, from his independent record label in 1994.

"Love Sign" was the most successful song released from the album, and it is a duet with , credited to Nona Gaye only even though the track is a duet, the reason behind that is because Prince (who was being called "TAFKAP" at the time because of his name change to an unpronounceble symbol) was still under contract with Warner Bros. and they would not let him release the single with his name on it so he decided to release the song under Nona Gaye's name and promotional single was sent out to radio stations independently through Prince's record label NPG Records, the single was not commercially released. The song has an anti-violence message.

The music video was shot by rapper in 1994, Nona Gaye and Prince are both featured prominently in the video. It received major airplay on BET and was very successful on its Top 20 countdown. The video shows Nona Gaye at a anti-violence convention and Prince as a secret love tryst. At the end of the video Nona is laying in Prince's bed and Prince walks away shaking his head jokingly. Most of the video was shot at Paisley Park.

The song was released as a promotional single and therfore was not allowed to chart on the U.S. or any other main U.S. charts (promotional singles were not allowed to chart until late 1998, when Billboard changed it's chart rules to include promotional/radio-only singles).It was a moderate success in the Urban/Rhythmic markets making the Top 40 on the R&B Airplay & Rhythmic Top 40 it was a minor success on the main U.S. airplay chart debuting & peaking at number 72 on the chart for one week.