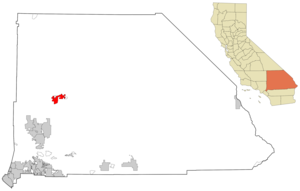 Barstow is a major regional transportation center. Several major highways including Interstate 15 and converge in the city. It is the site of a large rail , belonging to the . The also runs through town on on BNSF's main line to Daggett 10 miles east, where it heads to , and the BNSF heads to .

Barstow is home to and is the closest city to .

Despite its small population and relative isolation, Barstow is disproportionately represented in popular culture as a desert transit point. ran through Barstow, and the town's name is mentioned in the lyrics to the song, "Route 66" and in the song "" as raps that he "(has) a style that's way out like Barstow" commenting on Barstow's distance from the BEP's home city of . Barstow is also mentioned in 's novel "", in 's film "", and in numerous other films and television shows.

Barstow is also the butt of many jokes, particularly because of its brown, barren landscape and aging infrastructure. There is also a large number of vagrants in the area, likely because of the homeless getting off of trains at the railyard, and the convergence of the two Interstates. wrote a book entitled "Barstow", a work that takes as its text eight pieces of graffiti he had seen on a highway railing left by hitchhikers in Barstow.

Barstow started getting settled in the late 1840s in the . Barstow's roots also lie in the rich mining history of the . Because of the miners coming to Calico and Daggett following the discovery of silver in the 1860s, railroads were constructed to transport goods and people.

The Southern Pacific built a line from through Barstow to Needles in 1883. In 1884, by way of a compromise, ownership of the line from Needles to Mojave was transferred to the . Railroad magnate , who owned the Santa Fe, is the eponym of the city.

Barstow's history was further cemented with the paving of the major highways through the city. Much of Barstow's economy depends on transportation.

The city is very dry. The average annual precipitation is about 4 inches, with more than half of it typically falling during the winter months. Snowfall is uncommon in winter, occurring every year or two. [http://www.weather.com/outlook/travel/vacationplanner/wxclimatology/monthly/graph/USCA0069?from=36hr_bottomnav_vacation]

The native vegetation is dominated by low shrubs such as . City residents have introduced many non-native plants, prominent among which are trees such as , , , , ash, and .

There were 7,647 households out of which 36.7% had children under the age of 18 living with them, 45.4% were married couples living together, 17.7% had a female householder with no husband present, and 31.3% were non-families. 25.9% of all households were made up of individuals and 8.5% had someone living alone who was 65 years of age or older. The average household size was 2.71 and the average family size was 3.27.

In a 2006 state-funded economic survey, Barstow ranks among the 10 poorest cities in California. One third of residents receive public assistance and 4 out of 10 receive welfare and social security funds. Its long distance from major cities and urban centers has created economic problems, and Barstow is seeking projects to boost the economy. However, there are three casinos planned for the area. Numerous construction projects have been announced for Barstow, including a Wal-Mart distribution center, retail growth, and an increase in lodging accommodations. The Barstow economy is seeing positive growth that will continue well into the next decade.

The climate is very hot in the summertime(highest recorded temperature was 115 °F in 1995 (46 °C)), and it normally has above average winds.

Barstow has 8 elementary schools (grades 1-4), 1 intermediate school (5-6), and 1 junior high (7-8).
Grades 9-12 are taught at . is the main college in the area, and it's primary objective is to enable students to transfer to a four-year college or university.

;In Barstow
* The Barstow Station on Main Street a popular stop for travelers on I-15. Gift shops, fast food, and the office are located here. The dining section consists of three side-by-side rail-road cars&mdash;a reference to Barstow's railroad heritage. In September 1986, the at the Barstow Station was destroyed by fire when a tourist pulled up to drive through window and his car caught fire. In 1997, the McDonald's at the Barstow Station got national attention when a [http://www.reviewjournal.com/lvrj_home/1997/Jun-17-Tue-1997/news/5562956.html gunman opened fire, shooting several people, killing a nine year old girl] .

* The Casa Del Desierto, built in 1911 as a hotel and train station, now houses the , the and still functions as an (unstaffed) station. The Barstow Chamber of Commerce sponsors an annual sandcastle contest in the dry riverbed across from the Harvey House.

* Skyline Drive-In is one of the last operating s in San Bernardino County. It has two screens which both show two movies a night.

* The fast-food restaurant was founded in Barstow, and it is said that Barstow has the best Del Tacos. The first location is still open at 401 N. First Street.

;Near Barstow
* is the national training center for the U.S. Army. Located within the reservation is the of 's of .

* is designated as an due to landscape features and paleontological resources in the area. It is known for its multi-colored rock formations and scenic canyons.

* Calico Ghost Town is one of the few remaining original towns of the western United States, now preserved as a museum. It was preserved by Walter Knott (founder of ).

*, Miss California USA 2008
*, actress.
*, third base coach for the .
*, one of the soldiers charged with the rape and murder of .
*, football player.
*, majority leader, California State Senate
*, musician, founder of
*, music producer