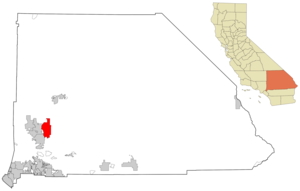 The Town of Apple Valley is located in the of San Bernardino County, in the of . It was incorporated on November 14, 1988, and is one of the twenty-two incorporated municipalities in California that uses "town" in its name instead of "city". As of 2006 the population was estimated to be 67,507.

In the early 1900s, resident Ursula M. Poates planted three apple trees in her yard to help convince prospective land-owners that fruit could be grown in this part of the Mojave Desert. She called the area Apple Valley and the name was officially recognized when a post office was established in 1949.

Apple Valley is governed by a "town council", whose 2007 mayor is Rick Roelle. The Mayor changes each December by a vote of the five-member Council.

Apple Valley was home to and , whose museum was first established in Apple Valley (in 1967) before the museum was relocated to Victorville in 1976. Since 2003 the museum has been in Branson, , and was moved there because the Town Council in 2003 would not allow it to continue to be there for reasons that never have been fully known. Apple Valley is the final resting place for both Roy and Dale. There are reminders of the Rogers everywhere one turns including roads and highways. Roy and Dale created St. Hillary's Episcopal Church, founded a home for boys, a juvenile detention center and while they were living took in some 20-40 children and raised them as their own.

Apple Valley was also where most location filming was done for the TV series in the late 1950s.

Apple Valley is located at the southern edge of the . It is bordered by Victorville on the west and Hesperia on the south sides. These three towns are commonly known as the Victor Valley. The primary thoroughfare through Apple Valley is State Route 18, which is known locally as the "Happy Trails Highway," named after the theme song of Roy Rogers and Dale Evans. Its downtown area is split currently between State Route 18 and Bear Valley Road (both roads are parallel until they intersect in the east outside of town).

The elevation of Apple Valley is approximately 2,900 feet (880 m) above sea level.

There were 18,557 households out of which 38.8% had children under the age of 18 living with them, 57.8% were married couples living together, 14.2% had a female householder with no husband present, and 22.6% were non-families. 18.0% of all households were made up of individuals and 8.4% had someone living alone who was 65 years of age or older. The average household size was 2.90 and the average family size was 3.27.

The football team has been very successful over the last two years, nearly nabbing a CIF title in 2006. Apple Valley is also in talks with the for an expansion team, though it will probably go to nearby Adelanto due to the probable loss of their A-Advanced team, the . They also have a rugby team in the , the . The Granite Hills High School swim team has done very well since the opening of the school. At least one swimmer each year has gone on to CIF in an individual event, and in the last 4 years relay teams have also made it to CIF. This year however, 2008, the girls 4x100, and Medley relay both made it to CIF, while the medley made second alternates the 4x100 relay made it to finals placing 12th. The Granite Hills wrestling team has also done very well; the team placed second overall in the 2005 CIF team finals. The school has had many placers in the CIF individual wrestling finals in its short history and has even had two wrestlers, brothers Gary and Gabriel Moore, place at the California State Wrestling Championships. Gary Moore- 5th, 125lbs (2003), Gabriel Moore- 5th, 275lbs (2004), 3rd, 275lbs (2005).

Apple Valley has been featured as a hot filming spot for many movies, TV shows, and commercials, including the late 1950s show "Sky King", several commercials for companies such as and celebrities such as , and the movie , starring .