Black Jacobin
For the book about the Haitian revolution by C.L.R. James, see The Black Jacobins. 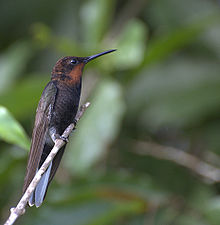 The Black Jacobin (Florisuga fusca), previously placed in the monotypic Melanotrochilus, is a species of hummingbird in the Trochilidae family. It is found in or near Atlantic Forest of eastern Brazil, Uruguay, eastern Paraguay, and far north-eastern Argentina. It is generally common, and therefore considered to be of least concern by BirdLife International and consequently the IUCN. Adults of both sexes are overall black with green-tinged back and wing-coverts, and white lower flanks and outer rectrices. The white in the tail is often flashed conspicuously in flight. The commonly seen immatures, sometimes incorrectly referred to as "females", have a distinctive rufous patch in the malar region.