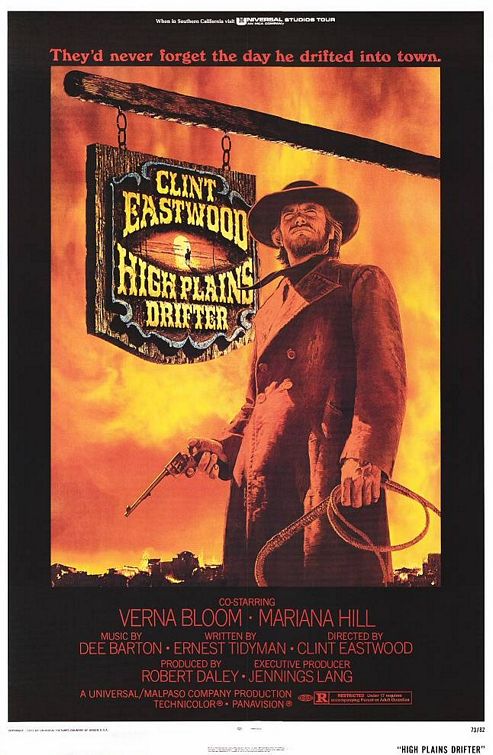 "High Plains Drifter" is a 1973 film with a hint of supernatural horror directed by and starring . He plays a character clearly influenced by the from 's "" and its sequels. Eastwood's direction, too, was inspired by Leone, as the film uses often compositions (by ) very similar to those seen in the "Dollars" films.Fact|date=May 2008 "High Plains Drifter" has a much quicker pace, however, which also indicates the stylistic influence of Eastwood's other mentor,Fact|date=May 2008 (in fact, Eastwood has noted that the graveyard set featured in the film's finale had tombstones reading "Sergio Leone" and "Don Siegel," intended as a comical "dedication" to both then-living directors).

Filmed on location on the shores of , , "High Plains Drifter" is morally complex in the manner of the "s". The screenplay was written by and an uncredited , with Tidyman authoring the novelization. Dee Barton provided the film's eerie .

As the film opens, a tall lone stranger gradually emerges from a shimmering desert horizon and rides into the town of Lago, Arizona. The townspeople eye him warily as he rides down the main street, but the crack of a teamster's whip pierces the silence.

The Stranger (Eastwood) enters a bar for a beer and a bottle of whiskey. He is challenged by three s, who mock him for being a "slow range bum". The Stranger looks up slowly and remarks that he is "a lot faster than they'll ever live to be". He turns his back on them, and walks away across the street to the barbershop, where the barber shows great fear of him upon his arrival but begins to give him a shave. Insulted that the Stranger didn't challenge them, within minutes the gunslingers enter the barbershop, where they surround him and attempt to lay hands on him. He surprises them by having his gun(s) already drawn and ready, hidden under the apron the barber had tied around his neck, shooting all three dead in seconds. Upon leaving the barbershop, a local woman named Callie Travers seems to desire his attention but, having no dignified way to show this, she accosts and insults him. He still won't give her the attention she's desperate for and he tries to walk away. She continues to badger him to get a reaction, until he drags her into the and rapes her. She resists at first, but then clearly begins to enjoy the experience. Afterward, he leaves her without a word, checks into the local hotel, and spends the night. The next day, while he's bathing at the barber shop, the town sheriff stops by to speak with him. While they're in conversation, Callie comes in with a pistol and tries to kill The Stranger. Although she fires four shots at the bathtub from close range, he escapes unscathed by ducking under the water. Afterward, the Stranger asks cynically "Wonder what took her so long to get mad?" "Because maybe you didn't go back for more" replies Mordecai (Mordecai, a dwarf, is the town outcast; he quickly befriends the Stranger, however).

The Stranger moves into the town hotel. When he sleeps, he is troubled by visions of three men with bullwhips flogging a fourth man to death in a street while faceless people watch from the shadows, doing nothing. As the movie progresses, the vision recurs, growing ever more detailed, until the shadowy faces are revealed as those of the townspeople. Only two people seem to protest the murder in the visions, only one of whom - Sarah Belding, wife of hotel owner Lewis Belding - tries to go to the victim's assistance. The other, Mordecai, shudders silently while hiding under the steps of the saloon.

Meanwhile, three felons, due to be released from the jail in Yuma in a few days, are expected to return to the town of Lago and wreak havoc. The men that the Stranger gunned down had been hired by the town to kill the felons, and now, in desperation, the town hires the Stranger to protect them. They offer him "anything he might want" in return. The townspeople and the three felons are linked by an illegal mine; they had hired the felons to assassinate the previous town marshal when he discovered the mine was on United States government land. The felons publicly whipped the marshal to death; afterwards, the townspeople framed the murderers for theft from the mine to keep them quiet. We later learn that Marshal Duncan was buried in an unmarked grave.

The Stranger takes full advantage of his carte blanche in the town, and his demands are both heavy and bizarre. Eastwood's character exacts a steep price for his help with the three returning felons and although he trains the townspeople and gives them a strategy, he is particularly ruthless and even asks the hotelier to tear down his own barn, and empty the hotel of all its occupants so he can settle in by himself. Resentment of his behavior grows among many of the townspeople. The managers of the mine argue over whether the Stranger is worth all the trouble he's causing, and one of the managers attempts (with disastrously unsuccessful results) to kill the Stranger in his bed. The ensuing melee ends with the hotel in ruins except the owners bedroom, and the Stranger exerts his strange charm over the innkeepers defensive wife whose initial objections and apparent dislike for the Stranger soon give way to attraction. She spends the night with the Stranger in her marital bed - much to her husband's chagrin. As he leaves, she mentions Marshall Duncan and that "they say the dead don't rest in an unmarked grave". She implies that he is dangerous and that the town is fearful of him. The Stranger replies that the people "are only afraid because of what they know about themselves" from the past.Shortly before encountering the returning felons, the Stranger literally has the locals paint the entire town red (to match its new name, ) and he also makes them set up a picnic table awaiting their return. By the film's end, the Stranger's vengeance is complete: after a final brutal whipping scene echoing that of the past, the town is in ruins and many of the prominent citizens are dead or missing, although the felons the town has feared are dead.

The question that has tormented the townspeople through the movie – who "is" the Stranger? – is addressed cryptically at the end. Leaving town, the Stranger encounters Mordecai finishing a grave marker, apparently at the Stranger's request. Mordecai says to him, "I never did know your name." The Stranger replies, "Yes, you do." Mordecai blanches at the answer, and as the Stranger returns to the shimmering haze of the horizon, the camera pans over the grave marker to reveal the name of the murdered Marshal, Jim Duncan. What is the connection is between the Stranger and the murdered man -- the Marshal's brother? the ghost of the dead man? the devil? an avenging angel? or just a drifter who exploited the situation -- is not explained.

The Stranger's various actions during the course of the film lend to different interpretations as to his origin. Popular theories tend to suggest that he is the brother or ghost of Marshall Duncan, or more abstractly the Devil or an avenging angel punishing the townspeople for their sins.

Many scenes seem to tie his arrival to Lago with the tragic fate of Marshall Duncan:
* The only townsperson to entirely escape the Stranger's wrath (or vengeance) is Mordecai, the man who tried to help Duncan.
* The Stranger's dreams of Duncan being whipped to death are experienced much like memories, the Stranger wincing with every lash.
* In the visions, Duncan looks visibly similar in appearance to The Stranger.
* In the film, it's mentioned that the dead cannot rest without a marked grave. The Stranger only leaves after Duncan's grave has been completed and inscripted.

Some sequences seem to indicate a supernatural origin:
* In the opening and closing shots, The Stranger materializes like an apparition from the shimmer of a heat wave, then vanishes back into it.
* The Stranger experiences clairvoyant visions in his sleep of the town's dark past, which he was not present to see.
* After being shot four times at close range in a bathtub, The Stranger emerges from the bathwater unscathed.
* In the barbershop, The Stranger anticipates the gunslingers' arrival, his drawn guns concealed under his apron awaiting the opportunity to fire.
* The townspeople's with The Stranger, culminating with the peculiar demand that they transform their home into a virtual Hell on Earth.

It is also worth note that the portrayal of a mysterious ominous figure arriving on the back of a pale horse, was repeated by Eastwood in his film, "", an allusion to the Fourth Horseman in the 6:8 "And I looked, and behold a pale horse: and his name that sat on him was Death, and Hell followed with him."

During an interview on "", Eastwood commented that earlier versions of the script made the Stranger the dead marshal's brother. He favored a less explicit and more supernatural interpretation, however, and excised the reference Fact|date=May 2008, although the Spanish, French and German dubbings retain it.

The film is well known for its horror-esque score Fact|date=May 2008 - a highly atmospheric combination of discords and eerie wailing which plays from the outset, followed by a typical stirring western soundtrack reminiscent of the POW camp orchestra scenes at the prison camp in 's "" Fact|date=May 2008, a film in which Eastwood also starred. The discorded sound is particularly effective during the whipping scenes in which the Stranger towers above the wrong-doer against a background of fire, evoking traditional images of hell which are echoed in the red paint covering the town Fact|date=May 2008.

*Eastwood had an entire town built on the shores of for the project.
*Filming was completed in only six weeks.
*The character of Marshall Duncan was played by stuntman , a long-time stunt double for Clint Eastwood, in order to create some ambiguity as to whether he and the Stranger are one and the same.

* was reportedly so upset by what he saw as an inaccurate depiction of the West that he wrote to Eastwood. Eastwood's reply, if any, is not known.
*The character of from the comic book "Preacher" is based on The Stranger.Fact|date=August 2008
*Jazz guitarist wrote a composition "High Plains Drifter" for his first Elektra release "".
*The Australian indie rock band The Cruel Sea had a song entitled High Plains Drifter on their 1991 album "This Is Not The Way Home".

* wrote a song for their album entitled "High Plains Drifter".
*"Daredevil" issue #219, written by Frank Miller and titled "Badlands" is about a small town where a corrupt sheriff once beat a man to death with a chain. Matt Murdock, out of costume, comes to the town and punishes those involved.
*The character Macgregor in the comic "" is based, in part, on The Stranger.
*The movie is based, in part, on this movie.
* has stated that "High Plains Drifter" (particularly the character of The Stranger) was his main inspiration for the fictional character Cypher in the "" game.
*After a fanclub-wide contest, "High Plains Drifter" was selected as the official name of the hot air balloon.
*Kid Rock references "" and "High Plains Drifter" in , the second track on . He whistles the theme to and alludes to painting a town red, and then painting the sheriff's wife white.
*In Jurassic 5's Hip-Hop ballad "Verbal Gunfight," Chali 2na asserts "I'm not a grifter, more like a high plains drifter."
* The 2007 spoof film "" contains a scene that is nearly a shot-for-shot to the opening of "High Plains Drifter", in which the story's hero rides (a white horse) into the British village of Stratford to apprehend the murderous townspeople.