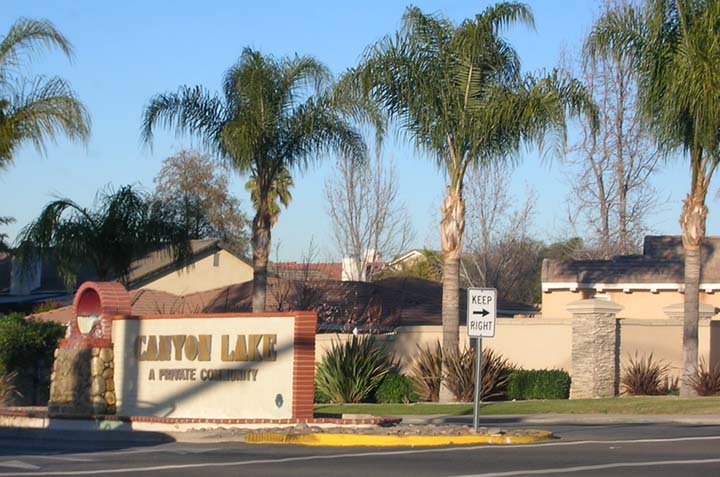 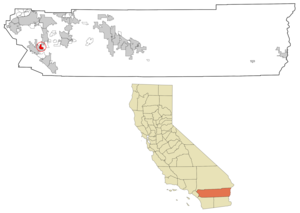 There were 3,643 households out of which 34.9% had children under the age of 18 living with them, 70.5% were married couples living together, 6.7% had a female householder with no husband present, and 19.3% were non-families. 14.3% of all households were made up of individuals and 6.8% had someone living alone who was 65 years of age or older. The average household size was 2.73 and the average family size was 3.00.

The “City of Canyon Lake” was incorporated on December 1, 1990

The serves Canyon Lake through the Perris Valley Station (the former headquarters of the now-disbanded Perris Police Department), despite most residents' (and visitors') assumptions that the City of (which has its own regional sheriff's station) is much closer to Canyon Lake than Perris. The City of Canyon Lake contracts for fire services with the Riverside County Fire Department through a cooperative agreement with Cal Fire(. Fire station 60 is located within Canyon Lake's gated portion, near the North Causeway across the lake.

The private areas behind the gates (however) are patrolled by AlliedBarton Security (Community Patrol and Lake and Marine Patrol) with the assistance of the Riverside County Sheriff's Department's Perris Valley Station, which contracts with the city for its law enforcement services.

The reservoir is supplied by storm water runoff from the San Jacinto River and Salt Creek. Water from the reservoir feeds the Canyon Lake Water Treatment Plant, which provides approximately 10% of the domestic water supply in the Lake Elsinore/Canyon Lake area.

In 1882 the California Southern Railroad built a line from Perris to Elsinore along the east side of the San Jacinto river. The Santa Fe Railroad bought the line and joined it with their line in San Bernardino. Floods in 1884, 1916, and 1927 washed out the tracks and the Santa Fe Railroad decided to abandon the line. Soon after the last flood the Temescal Water Company bought the railroad right-of-way, as well as 1,000 acres from Henry Evans, a rancher, and other land from B.T. Kuert. Those were the two parcels that make up most of Canyon Lake today. Construction started in 1927 to build a dam across the river to store water. It was finished in 1929. Railroad Canyon Reservoir, when built, was one of the largest fresh water lakes for fishing, hunting and camping in Southern California. Railroad Canyon Reservoir and the surrounding area was leased as a concession from Temescal Water Company as a recreational area under the operation of the George D. Evans family from 1937 until after World War II. After the War Ray and Alpha Schekel, along with John and Darleen Kirkland operated the resort until 1949 when the lake was drained for repairs to the floodgates. Elinor and Donald Martin operated the resort from its reopening in 1953 until 1968. In 1968 the Corona Land Development Company developed the new community. [Martin, Elinore. Images of America, Canyon Lake, Arcadia Publishing, 2007.] [http://www.cityofcanyonlake.com/history.asp]

One of only five gated cities in California (the other incorporated gated cities in Southern California are Bradbury, Hidden Hills, Laguna Woods, and Rolling Hills), Canyon Lake began as a master-planned community developed by Corona Land Company in 1968.All of the homes within the City are located within the Canyon Lake Property Owners Association (POA), which is a gated community, and all but a few roads within the city are privately held and maintained, with the exception of two main roads (Railroad Canyon and Goetz Roads). The entrances to the Canyon Lake POA are gated and guarded, accessible by residents and selected guests approved by the owners within the POA. There are three entrances to the gated portion of the community. The Main (south) Gate is located on Railroad Canyon Road. The East Gate is located just off Goetz Road. The North Gate is located at the north end of the community at the south end of Greenwald Avenue. All gates are manned twenty-four hours a day by the Community Patrol. Access is granted to outsiders by sponsorship from a property owner or renter who calls in their guests to a 24-hour answer line.

There are 4,801 lots within the community. 1,035 of the homes within Canyon Lake have waterfront access with private boat docks and slips and about one-quarter are adjacent to the golf course. There are 175 condominiums and 125 manufactured homes in Canyon Lake.

The Association operates within a scope of authority and responsibility outlined in the Articles of Incorporation, Covenants, Conditions and Restrictions () and By-Laws, which are recorded against Canyon Lake properties, and form an agreement between each property owner and the association.

Five persons are elected by the membership to serve as the Board of Directors of the Association. They meet twice each month. A general manager is employed by the Association as set forth by policy established by the Board of Directors. The dates and times of meetings are published in the [http://thefridayflyer.com/ The Friday Flyer] , the local newspaper. These meetings are open to the membership, and members are encouraged to attend. The meetings are also televised on the local cable Channel 3 for those who cannot attend in person.

The Lake and Marine Patrol, as well as the Community Patrol services are contracted out to a private company, AlliedBarton Security. The Lake and Marine Patrol are responsible for the enforcement of all the rules and regulations of boats and other uses of the lake. The Community Patrol is responsible for 24-hour gate security as well as 24-hour street patrol. Since becoming an incorporated city in 1990, Canyon Lake has its own Police Department, as well as the private security services.

All of the homeowners within the Canyon Lake POA have rights and access to the Lake for recreational uses. Personal watercraft (Jet Skis, etc.) are banned for use on the reservoir. However, ski-boats (with a maximum length of 21 feet), fishing boats, row boats, paddle boats, sailboats and kayaks are allowed, as are wake-boarding and water-skiing. There is a 35 MPH speed limit on the main lake, which is patrolled by Canyon Lake's Lake and Marine Patrol, as well the . The East Bay is limited to a "No Wake" speed. Each year the Association stocks the lake with a generous supply of catfish and bass, which join the crappie and bluegill there, for the enjoyment of fisherman. There are swimming areas, fishing “holes”, beaches, a slalom course and a jump lagoon, gas docks, and rental slips which make the lake a busy place thanks to the Canyon Lakers and the more than 2,000 boats they have registered with the POA. All boats must be registered and have insurance in a homeowner's name. Canyon Lake is home to world class wake-boarders and water-skiers. Canyon Lake clubs train the new water-skier and wake-boarder and also plays host to many tournaments.

There are 13 parks in the community making up 45.5 acres, many with sandy beaches as well as docks at which boats can be tie up for short periods. Indian Beach Park has a theatrical stage which is used by the Canyon Lake Community Theatre group for theatrical and other performances which are staged during the year.

Canyon Lake's community newly constructed (2000) 19,000 square feet clubhouse, the Canyon Lake Lodge, always has a variety of activities taking place and is considered the "jewel" of the community. The Lodge offers dining at the Lighthouse Restaurant and banquet facilities, as well as "The Lounge" bar. The community's Olympic-sized, heated pool and tennis courts share the Lodge's grounds. Included in the pool are 3 lap swimming lanes, as well and a separate toddler wading pool. Shower and changing facilities are available. They both have a picturesque view of the main lake, unobscured by visible fencing.

The Canyon Lake Golf Course is an SCGA-rated 18-hole, par-71 5,868-yard 75-acre regulation course with a driving range, putting green, and pro shop, as well as rental carts available. The Clubhouse has dining service at the Country Club Restaurant and bar.

There is a 10 acre Equestrian Center with stables. The facility includes a show riding arena, a jump arena, turn out arena, a hot walker and double wash rack. There is a barn with 17 stalls, outside pipe corrals with covered breezeways, and community room where horse owners can gather. There are miles of bridal trails winding throughout the surrounding hills.

There are 6 lighted tennis courts adjacent to the Canyon Lake Lodge. Tournaments are scheduled by the Canyon Lake Tennis Club for each month during the year which includes doubles, mixed doubles, and team tennis. Scheduled weekly are men's and women's tennis. Tennis pro Steve Vorhees provides a Jr. Tennis Program and training lessons for all ages.

There is a 7.5 acre private 90 campsite campground for property owners and their guests adjacent to the lake. On 37 of the sites you will find complete hook-ups for water, sewer, electric and television. The remaining 53 sites are equipped with electric and water. There are showers, restrooms, washers, dryers and an ice machine. There is a dump site for all campers. A full time manager lives on the premises. The 5 docks can accommodate up to 45 boats at any given time. The swimming beach is 350 feet long. The campground is a great place for fishing, playing horseshoes, volleyball and windsurfing in the protected, 5 miles an hour zone.

Gault Field is located on the North side of Canyon Lake. The multi-purpose sports complex has lighted regulation softball fields and serves the needs of teams and individuals of all ages. Summer and winter baseball leagues use the field, as do soccer players.

There is an unusual law here in Canyon Lake (strictly enforced by the CLPOA), that forbids all public use of ANY "two-wheeled motorized vehicle" (that is, all motorcycles, mopeds, and dirt bikes) on all private streets throughout the CLPOA, but excluding the two public roads (Railroad Canyon and Goetz Roads) [http://www.thefridayflyer.com/FF-2006-11-3/FFS-5538.htm Motorcycle Prohibition Upheld] .

The only private business facility within the gated portion of Canyon Lake is Summerwood Landing, which is a RV, boat, and general storage facility.

The community is served directly by the [http://canyonlakechurch.org/ Canyon Lake Community Church] , which is the only church with its own facilities within the City of Canyon Lake, but located outside the gated portion of the community. [http://www.tideschurch.org/ Tides Church's] facilities are in the Canyon Lake Towne Center.