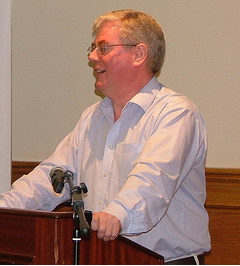 Eamon Gilmore (born 24 April 1955) is the leader of the Irish Labour Party. He was formally confirmed on 6 September 2007 [ [http://www.rte.ie/news/2007/0906/labour.html Gilmore declared new Labour leader] &ndash; "", 6 September 2007.] after being the only candidate for the post after the resignation of . He is currently also for Dún Laoghaire and was previously Party Spokesperson for the Environment & Local Government.

In 1985 he was elected to . Gilmore was first elected to in the 1989 general election as a member of the Workers' Party for the constituency of Dún Laoghaire, and has been re-elected on every occasion since then. In 1992 he joined with and five other Workers' Party deputies in the creation of New Agenda which subsequently became Democratic Left. It merged with the Labour Party in 1999. Between 1994 and 1997 Gilmore served as Minister of State at the Department of the Marine.

Following 's resignation as party leader in August 2007 Gilmore announced his candidacy for the leadership. He received support from senior figures such as , , , and and did not have to contest a ballot, being formally confirmed as leader on 6 September after being the only declared candidate.

Gilmore has expressed a preference for a focus on the Labour policies and Labour's future rather than an electoral alliance with any other party or preoccupation with the Labour "brand".