The College of St. Scholastica

The College of St. Scholastica 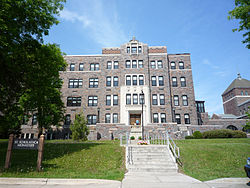 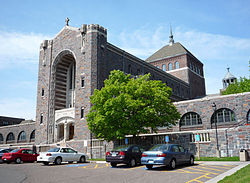 Our Lady Queen of Peace Chapel

The College of Saint Scholastica is a private college with its main campus located in Duluth, Minnesota. The College was founded in 1912 by a group of pioneering Benedictine Sisters who offered college courses to six young women. Today St. Scholastica educates more than 4,000 students annually and has graduated more than 13,000 alumni.

Adjoining the campus are St. Scholastica Monastery, home of the Benedictine Sisters, and the Benedictine Health Center, which serves the needs of the Duluth area and provides opportunities for practical experience for many of the College's health science and behavioral arts and sciences students. St. Scholastica has a 13:1 student-to-teacher ratio and 17 intercollegiate athletics programs.

In addition to the main campus in Duluth, St. Scholastica also has sites in Brainerd, St. Cloud, Rochester, St. Paul, and a virtual campus.

St. Scholastica has a number of undergraduate programs, including Advertising, Biochemistry, Education, English, Exercise Physiology, Nursing, and Ojibwe Language and Culture Education. Graduate programs offered include the Doctor of Physical Therapy, Master of Education in Curriculum and Instruction, and Master of Arts in Computer Information Systems.

St. Scholastica utilizes a program called "Dignitas" (Dignity), which all students are required to take part in. Students are made to choose a single course their first year of school that may focus on as broad a category as the psychology behind human beings bowling alone. These classes are very participation-driven and have students do such hands-on things as helping out in the community, gardening, and creating a mission statement for one's own life. St. Scholastica faculty is very proud of this program and claim that CSS was one of the very first colleges to use such a method to introduce their students to the campus, the faculty, and one another; they even go so far as to say that the springing up of similar programs over recent years in neighboring colleges was due to their influence.

The St. Scholastica Men's Soccer team compete in the Upper Midwest Athletic Conference (UMAC) and have a strong program led by Head Coach Barry Chastey. The Saints mens soccer team have been UMAC Regular Season Champions 11 times, including winning the UMAC tournament a total of 9 times. The Saints also made their first appearance at the NCAA National Soccer Tournament in the 2010 season as well as winning the UMAC regular season and the UMAC tournament. Their Home games are played at the Saints Field located on campus.

The Saints have won 14 straight Upper Midwest Athletic Conference (UMAC) regular season and post season titles from 1996 to 2010. The baseball team plays their home games in Wade Stadium, which is also the home of the Duluth Huskies of the Northwoods League. The Saints have quite a following on campus which spurned a St. Scholastica Baseball fan blog detailing each Saints Baseball season as it progresses.

The men's hockey team competes in NCAA Division III as part of the Northern Collegiate Hockey Association (NCHA). The 2006-07 season was a special season for the Saints as they defeated the University of Wisconsin–Superior two games to one in the opening round of the NCHA Tournament and then defeated the University of Wisconsin–River Falls by the score of 2-1 in the NCHA Semifinals to advance to their first NCHA Championship Game in school history. The Saints are led by Third Year Head Coach Mark Wick, a graduate from Hermantown High School and St. Scholastica in 1985. Home games are played at Mars-Lakeview Arena, located south of the college on Rice Lake Road, which has an ice surface of 200x85 and can hold up to 1,200 people. The hockey team began playing at Mars-Lakeview Arena in 1999. Before 1999, the team played their home games at the Superior Amateur Hockey Arena, which is commonly known as SAHA arena, located in Superior, Wisconsin. Before becoming part of the NCAA, the hockey team participated in the NAIA until the NAIA dropped ice hockey as a sport in 1984. Before the NAIA dropped ice hockey as a sport, the Saints won two NAIA national ice hockey championships in 1975 and 1977.

The St. Scholastica Men's Tennis team is led by 13 year head coach Rockwell Patten. Coach Patten came to St. Scholastica after playing tennis at his alma mater University of Minnesota-Duluth. The team is also benefiting from the return of assistant coach Pat Greehan, a Boston native. Colby Carlson, a California native, has also joined the coaching staff for the 2008 season.

The College of St. Scholastica added a football team in 2008. This decision was met with much opposition from current students that felt their tuition money could go to more worthy causes, including library expansion, more academic scholarships, more parking, and technological improvements. The school had been accepting applications for the Head Coaching position and, in fact, received over 130 applications before narrowing the search to four on February 19, 2007. On March 19, 2007 the school officially named Greg Carlson as the first football head coach in the school's 95 year history. The team began play in the fall of 2008, with its opener September 20 at Wisconsin Lutheran. In the 2008–2009 season, the team managed to win one game.

Dr. Steve Pfingsten enters his 20th season of coaching cross country at The College of St. Scholastica. He has been the head coach for 18 years. Under the guidance of Coach Pfingsten, six teams and 16 individuals have competed in National Cross Country Championships. The Saints have won nine UMAC conference championships in the past eight years, earning a total of 81 All-Conference awards and seven individual championships. Coach Pfingsten has been named conference coach of the year eight times. Coach Pfingsten’s Christian faith is very important to him and is reflected in his approach to life and coaching.

St. Scholastica houses students living on campus in ten buildings, three of which were built in the past three years. They are:

The College Library is located above the Our Lady Queen of Peace Chapel on campus. It was built in 1938 in a Romanesque style[3]. The library houses 152,843 volumes[4] and offers wireless internet access, interlibrary loan, group study rooms, laptops for students to check out, research databases, and research help[5].