Old Basing is a village in the north-east of the English county of Hampshire. It is situated just to the east of Basingstoke, and in the 2001 census had a population of 7,232. Its former name is Basing (which several neighbouring village signs highlight), and while Basingstoke has grown, the 'Old' seems to suit Basing well. 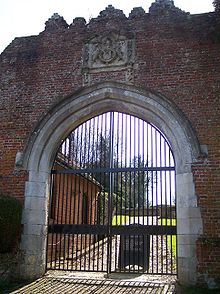 Old Basing was first settled around 700 by an Anglo-Saxon tribe known as the Basingas, who gave the village its name (the meaning being "Basa's people").[1] It was the site of the Battle of Basing on 22 January 871, when a Danish army defeated Ethelred of Wessex. It is also mentioned in the Domesday Book of 1086.

The centre of the village, The Street, contains many old houses, and St Mary's Church. The River Loddon, whose source is in Worting to the west of Basingstoke, flows through the village, which is perhaps best known for the ruins of Basing House which was built between 1532 and 1561 on the site of a Norman castle. It was the home of the Marquesses of Winchester for several generations before being destroyed after a 24-week siege during the English Civil War.

Many names in modern Old Basing allude to the war, such as Cavalier Road and Musket Copse, as well as several sites named after Oliver Cromwell including Oliver's Battery, Cromwell Cottage and Oliver's, an award-winning fish and chip takeaway and restaurant.

The route of the former Basingstoke Canal also ran around Basing House and then through and around parts of Old Basing.

Old Basing elects three councillors to Basingstoke and Deane Borough Council and is part of the Basingstoke constituency in elections to Parliament.

Old Basing provides both an infant school and a junior school. The junior school, named St Mary's, is aided by the Church of England. A new primary school has recently opened in nearby Lychpit. Children from Old Basing proceed to a variety of secondary schools in the Basingstoke area. The senior schools include Costello and a catholic school called Bishop Challoner.

Basing Rovers F.C. is the local football team, founded in 1886. The Recreation Ground in Old Basing plays host to a variety of sporting events as well as the Old Basing Carnival. There are rugby union and football pitches which overlap a cricket ground in addition to five tennis courts (of which one is free), an archery area and a lawn bowling green.

Edward Lear makes reference to Old Basing in his Book of Nonsense of 1846 (number 37):

"There was an Old Person of Basing,
Whose presence of mind was amazing;
He purchased a steed,
Which he rode at full speed,
And escaped from the people of Basing."