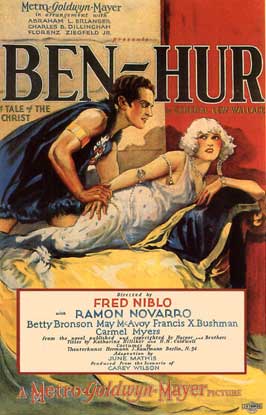 "Ben-Hur" was a 1925 directed by . It was a blockbuster hit for newly merged . This was the second film based on the novel "Ben-Hur" by .

In 1997, "Ben-Hur" was selected for preservation in the United States by the as being "culturally, historically, or aesthetically significant".

Ben-Hur is a wealthy Jew and boyhood friend of the powerful Roman Centurion, Messala. When an accident leads to Ben-Hur's arrest, Messala, who has become corrupt and arrogant, makes sure Ben-Hur and his family are jailed and separated.

Ben-Hur is sent to work in the of a Roman warship. Along the way he unknowingly encounters , the carpenter's son who offers him water. Once aboard ship, his attitude of defiance and strength impresses a Roman admiral, Quintus Arrius, who allows him to remain unchained. This actually works in the Admiral's favor because when his ship is attacked and sunk by pirates, Ben-Hur saves him from drowning.

Arrius then treats Ben-Hur as a son and over the years, the young man grows strong and becomes a victorious racer. This eventually leads to a climactic showdown with Messala in a chariot race, in which Ben-Hur is the victor.

Ben-Hur is eventually reunited with his mother and sister, who are suffering from but are miraculously cured by Christ.

Costing between 4 and 6 million dollars, "Ben-Hur" is the most expensive ever made.

"Ben-Hur" was a big success as a novel, and also as a stage play. Stage productions had been running for twenty-five years. In 1922, two years after the play's last tour, the Goldwyn company purchased the film rights to "Ben-Hur". The play's producer, Abraham Erlanger, put a heavy price on the screen rights. Erlanger was persuaded to accept a generous profit participation deal and total approval over every detail of the production.

Shooting began in Italy in 1923, starting two years of difficulties, accidents, and eventually a move back to Hollywood. Additional recastings (including Ramon Novarro as Ben-Hur) and a change of director helped skyrocket the production's budget. The studio's publicity department was shameless, advertising the film with lines like: "The Picture Every Christian Ought to See!" Although audiences flocked to "Ben-Hur" after its premiere in 1925 and the picture grossed nine million dollars, its huge expenses and the deal with Erlanger made it a loser for MGM. MGM was unable to regain its $4,000,000 investment. [cite web
url = http://www.findarticles.com/p/articles/mi_g1epc/is_tov/ai_2419100110
title = The Making and Release of Ben-Hur
publisher = findarticles.com
accessdate = 2007-01-26] [cite web
url = http://www.albany.edu/writers-inst/fnf98n5.html
title = Commentary on Ben-Hur
publisher = www.albany.edu
accessdate = 2007-01-26]

When filming the chariot scene, the drivers were careful and slow, which disappointed Meyer. To make it more exciting, he offered a prize of $100 (about $1000+ today) to the winner, and the resulting heated competition led to the horrendous crash that remains in the movie. That and another fatal accident led to changes in rules of filming and film safety.

A 1931 reissue added music, by the original composers William Axt and David Mendoza, and sound effects. As the decades passed, the original Technicolor segments were replaced by black-and-white dubs. These scenes were considered lost until the 1980s when (who by then had acquired the rights to the film) found the crucial sequences in a Czech film archive.

Current prints of the 1925 version are from the Turner-supervised restoration. The restoration includes the color tints and Technicolor sections, set to resemble the original theatrical release. There is an addition of a newly recorded stereo orchestral soundtrack by with the which was originally recorded for a screening of the movie.

It can be found on DVD, complete with the Technicolor segments, in the four-disc collector's edition of the 1959 version starring .

This remains one of the few films at Rotten Tomatoes to maintain a 100% freshness rating. [http://www.rottentomatoes.com/m/benhur_a_tale_of_the_christ/ Rotten Tomatoes: Ben-Hur A Tale of the Christ]

*
* [http://www.brightlightsfilm.com/52/benhur.htm Getting It Right the Second Time — an comparative analysis of the novel, the 1925 film, and the 1959 film, at BrightLightsFilm.com]
* [http://www.findarticles.com/p/articles/mi_g1epc/is_tov/ai_2419100110 A detailed article about the background of the movie]