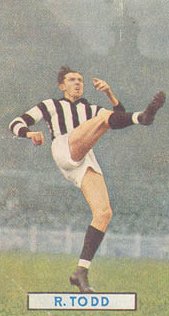 Ronald Walford Todd (born 23 October 1916) was an er who played with Collingwood in the VFL in the 1930s. Todd was an acrobatic and pacy forward, possessing a strong overhead mark. He kicked 327 goals for Collingwood at an average of 4.30 goals per game, 55 of them came in finals football.

Todd debuted for Collingwood in 1935 and joined in the forward line. For his first three seasons he played a centre half forward but moved into the goalsquare when Coventry retired at the end of 1937. He had an immediate impact, kicking 102 goals in the 1938 home and away season before adding 18 more in the finals. His season tally was the highest in the league and he again topped the league in 1939, this time finishing with 121 goals.

In a game during the 1938 season against Carlton he kicked 11.5 yet ended up on the losing team. The following season he brought up his 300th career goal, his 73 games equalled Bob Pratt's record for least games required to reach the milestone.

His VFL career ended when he signed up with Williamstown in 1940. Due to a clearance dispute the VFL banned him for five years meaning that a future return to the Magpies was unlikely. From his debut season until 1949 he kicked 672 goals and won premierships in 1945 and 1949. He booted a record 188 goals in the 1945 season, including 20 in a match against Oakleigh.