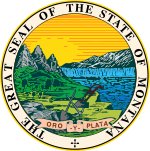 As established and defined by the Montana Constitution, the government of the State of Montana is composed of three branches, the Executive, Judicial, and Legislative. The powers of initiative and referendum are reserved for the citizens of Montana.

The second, and current state constitution enacted in 1972 placed more responsibility on the individual voter and made significant strides to protect Montana’s environment.[1] With a Bill of Rights that gives Montanans the strongest protection of all the states, the revamped constitution established new foundations for self-government, most notably, a respect for the rights of the individual, a sense of stewardship of the state’s many natural resources, and assured that government operating behind closed doors, in smoke-filled rooms, beyond the view of the press and the public was relegated to the pages of history books. Access to their government is a constitutionally protected right of all Montanans and includes the right to examine documents or to observe the deliberations of all public bodies or agencies of state government and its subdivisions.[2]

Like the federal government and 48 other states, Montana has a bicameral legislature composed of two chambers, a 100-member House of Representatives and a 50-member Senate. Legislators are elected by popular vote. As of 1992 term limits were enacted limiting House members to four 2-year terms, and Senate members to two 4-year terms. The Montana State Legislature convenes only on odd numbered years, and for 90 day periods. In addition, state law allows for the legislature to be convened in special session by the governor or at the written request of a majority of the members. As of 2005, the Montana Legislature has been convened in special session thirty times in its history.[3]

The daily administration of the state’s laws, as defined in the Montana Code Annotated, are carried out by the chief executive—the governor, and his second in command the Lieutenant Governor, the Secretary Of State, the Attorney General, the Superintendent of Public Instruction, the State Auditor, and by the staff and employees of the 14 executive branch agencies.

Acknowledging the importance of providing for an orderly arrangement in the administrative organization of state government, the number of principal departments from which all executive and administrative offices, boards, bureaus, commissions, agencies and instrumentalities of the executive branch (except for the office of governor, lieutenant governor, secretary of state, attorney general, superintendent of public instruction, and auditor) must perform their respective functions, powers, and duties, is constitutionally limited to not more than 20 principal departments.[4] Currently the state operates with 14 principal departments. Provision is made within the state constitution for the establishment of temporary commissions not allocated within a department.

The highest court in the state is the Montana State Supreme Court. The court hears cases pertaining to the disputes involving Montana State Government, and interprets; state statutes, the State constitution, and administrative rules. Unlike most state court systems and the federal judiciary, Montana does not have an intermediate appellate court; the State Supreme Court must hear all appeals. The Montana Supreme Court has other duties, including lawyer discipline and revisions of various rules, such as the Montana Rules of Civil and Appellate Procedure, the Rules of Professional Conduct that apply to Montana lawyers, and the Rules of Lawyer Disciplinary Enforcement that govern lawyer discipline cases. On occasion, the Montana Supreme Court also must determine whether to impose judicial discipline as recommended by the Judicial Standards Commission. The Montana Water Court adjudicates matters of water rights within the state.

The Judicial power of the State of Montana is vested in the following:

In addition to legislators, state law prohibits the following public officials from seeking re-election if they have already held the office for 8 years in any 16-year period; Governor, Lieutenant Governor, Secretary of State, State Auditor, Attorney General, Superintendent of Public Instruction.