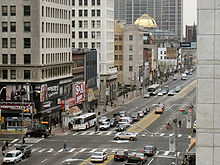 Broad and Market Streets, as seen from the Prudential Plaza Building

Downtown Newark is Newark, New Jersey's major central business, retail, and cultural district. It is located at a bend in the Passaic River.

Downtown is the site of the original Puritan settlement of Newark. The first settlers, led by Robert Treat, landed not far from the present site of the New Jersey Performing Arts Center. The intersection of Broad and Market Streets, known as Four Corners was once considered the busiest intersection in the nation, and is the heart of traditional downtown.[1] 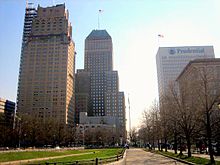 Most of Newark's office buildings are located in this area. In the post-World War II era, downtown seemed to be moving north during the New Newark architectural period, in the direction of Washington Park. Since the 1967 riots, it has been shifting slightly east in the direction of Newark Penn Station, the Gateway Center and the Passaic River.

Downtown Newark is the home to Newark's major cultural venues - the New Jersey Performing Arts Center (NJPAC), the 3,000-seat Newark Symphony Hall, Prudential Center, the Newark Museum, Military Park, the Playland Arcade and the New Jersey Historical Society. Downtown is also home to Seton Hall University School of Law and Aljira, an emerging artist's gallery. It is also home to Government Center, an area of municipal and federal government offices. It was once home to a Chinatown neighborhood centered around Mulberry Arcade, which was off of Mulberry Street, near Lafayette and Green Streets. Many of downtown's cultural and historical sites are linked by the unmarked Lenape Trail, which also leads to Branch Brook Park, the Watchung Mountains and the Passaic Meadows on this yellow-blazed trail.

The $375 million Prudential Center, home to the New Jersey Devils, opened on October 25, 2007, with the first of ten concerts by Bon Jovi. The arena is the New York metropolitan area's first all-new professional sports venue in over two decades.[2]

Though it has a number of buildings of great architectural significance, downtown Newark has very few housing units and its storefronts are typically not well maintained. The buildings range from four to 35 stories tall presenting indiscriminate architecture. Many storefronts have enormous awnings. 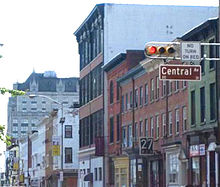 Halsey Street near University Heights is lined with galleries and restaurants

Much of the city's retail and commercial developments are centered around Broad Street (the city's widest north/south boulevard, which once carried streetcars headed for Elizabeth and points south) and Market Street. The intersection of the two streets, known as Four Corners is widely considered to be one of the busiest in the state and at one time was considered the busiest in the country.[3]

Both Broad Street and Market Street are a bustle of activity crowded with numerous shops. Broad Street has many street vendors as well. At night however the streets are vacant and shops are closed. The City of Newark is publicly committed to turning downtown into a "24-hour city," but many developers have been afraid to take a risk on Newark.

However, the downtown area is slowly beginning to develop a 24-hour presence. The former Hahne's and Lefcourt buildings are going to be converted into condominiums beginning in 2005. Rutgers-Newark has built a six hundred bed dorm on Central Avenue. An old office building on Clinton Street has already successfully been converted to luxury lofts. Additionally, 1180 Raymond across from Military Park - Newark's second tallest building - completed a $150 million conversion to luxury apartments in 2006. 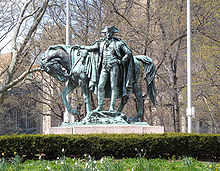 Although many of the downtown stores are lower-end retailers (dollar stores, nail salons, and the like), the area is quickly changing. Stores like Starbucks and New York and Company have set up business, in addition to new branches of TD Banknorth, PNC, Citi, and JPMorgan Chase banks.

Aided by the presence of the New Jersey Performing Arts Center, new apartments, and its proximity to the Newark's colleges and universities, downtown has seen a variety of restaurants and bars open their doors in the past several years. In addition to several high end restaurants catering to the theater crowd, downtown Newark is home to two Irish pubs, a SoHo style bistro, a gourmet soup restaurant, and an increasing number of other establishments.

Most buses pass through Downtown and it is a principal shopping district of most Newark area residents. Washington Street Station, Penn Station, Military Park Station and all the stops on the Newark Light Rail serve the downtown area. Interstate 280 lies just north of Downtown, running parallel to New Jersey Transit rail operations.

The Main Library is on Washington Park and served by the Newark Light Rail.