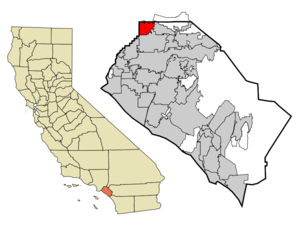 La Habra is a city located in the northwestern corner of , . As of the 2000 census, the city had a total population of 58,974. Its related city, is located to the north of La Habra, and is in .

In the ranchos days when vast herds of Mexican cattle and horses grazed over the hills and valleys of Southern California, Don Mariano Reyes Roldan was granted convert|6698|acre|km2|0 and named his land Rancho Cañada de La Habra. The year was 1839, and the name referred to the “Pass Through the Hills,” the natural pass to the north first discovered by Spanish explorers in 1769. In the 1860s Abel Stearns purchased Rancho de La Habra. Soon thereafter, heavy flooding followed by a severe drought brought bankruptcy to many cattle ranchers.

The first La Habra Post Office was established in 1898 in a corner of Coy's Store at Central (now La Habra Boulevard) and Euclid Street.

The City was incorporated under general law on January 20, 1925 with a population of 3,000. The Police Force was organized in 1926 and employed a Chief, Traffic Officer and Patrolman. By 1928, the City bore the distinction of being the largest avocado center in Southern California. In 1930 the first Fire Department building was constructed followed by the original City Hall in 1935. By 1950 the population reached nearly 5,000. The Civic Center took shape when the existing County Library was dedicated in 1966, followed by the present Administration Building in 1969.

opened his first law office in La Habra just west of the Civic Center on the north side of La Habra Boulevard. That brick building was demolished in the 1990s for the construction of the City's Community Center.

For over seventy years La Habra was home to the [http://www.avocado.org/avocado-facts/mother-tree.php Hass Avocado Mother Tree] , an accidental seedling planted by Rudolph Hass in the 1920s. The fruit from this tree has since become one of the most popular avocado cultivars worldwide. The Hass Mother Tree succumbed to root rot in 2002.

There were 18,947 households out of which 39.3% had children under the age of 18 living with them, 54.5% were married couples living together, 13.5% had a female householder with no husband present, and 26.0% were non-families. 21.0% of all households were made up of individuals and 8.0% had someone living alone who was 65 years of age or older. The average household size was 3.08 and the average family size was 3.56.