Lola versus Powerman and the Moneygoround, Part One

Lola versus Powerman and the Moneygoround, Part One

Infobox Album |
Name = Lola versus Powerman and the Moneygoround, Part One
Type =
Artist = 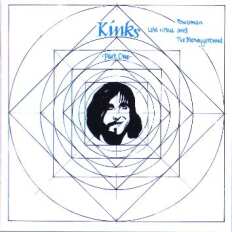 "Lola versus Powerman and the Moneygoround, Part One" is an album by the English rock band , recorded and released in 1970.

Lyrically, "Lola versus Powerman" is a satirical look at the various facets of the music industry including song publishers ("Denmark Street"), unions ("Get Back in Line"), the hitmaking machine ("Top of the Pops"), accountants and business managers ("The Moneygoround") and the road ("This Time Tomorrow"). "Apeman" finds Davies becoming fed up with it all and expressing a desire to leave society and go swinging through the jungle. The closing track, "Got to Be Free", is an anthem for maintaining personal independence in the face of all opposition. Musically, the album is an extremely varied affair, contrasting gentle ballads like "Get Back in Line" and "A Long Way From Home" against songs like "Rats" and "Powerman", two of the hardest rockers in the Kinks repertoire. "Denmark Street" and "The Moneygoround", like much of Ray Davies's work, pay homage to the English tradition. The album's most famous song and a worldwide hit single, "Lola", is about an encounter with a tranvestite. Encouraged by his father, Davies consciously and carefully crafted the song to be a hit after a long dry spell for the band on both the U.K. and U.S. charts. He was even forced to fly from the United States to England to overdub the trademarked word "Coca-Cola" from the original master tape to prevent potential legal problems. The success of the single and album had important ramifications for the band's career at a critical time, allowing them to negotiate a new contract with , construct their own London Studio and assume more creative and managerial control. "Lola" also became their most popular sing-a-long anthem at concerts, as they struggled to regain a footing in the U.S. concert market after the , who had refused permits for the group to perform concerts there since 1965, relented in 1969. [ [http://kinks.it.rit.edu/misc/articles/kinksin.html Who Let the Kinks In?] , Loraine Alterman, "", 18 December 1969, archive copy on Dave Emlen's Unofficial Kinks Web Site, accessed 17 September, 2007]

All tracks written by except where noted.

Bonus tracks from the CD reissue.