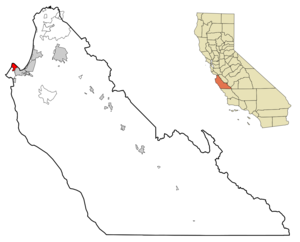 mapsize = 250x200px
map_caption = Location in Monterey County and the state of

Pacific Grove is known for its Victorian homes, , its artistic legacy and the annual migration of the Monarch butterflies. The city is endowed with more Victorian houses per capita than anywhere else in America; some of them have been turned into inns.

The city is also known as the location of the , the oldest continuously-operating lighthouse on the West Coast, , located in the historic downtown, and the .

It is also known as 's place of death.

In prehistoric times the were one of the linguistically distinct groups of the Monterey Bay Area who inhabited the area now known as Pacific Grove. This tribe subsisted with , and gathering in what has been deduced as a ally rich .

Pacific Grove as its shape is known today began in 1875 as a summer Methodist camp, where hundreds assembled to worship amid rough tents. In time, the butterflies, fragrant pines and fresh sea air brought others to the Pacific Grove Retreat to rest and meditate. The initial meeting of the Pacific Coast branch of the Chautauqua Literary and Scientific Circle was held in Pacific Grove in June 1879. Modelled after the Methodist Sunday school teachers’ training camp established in 1874 at Lake Chautauqua, N.Y., this location became part of a nationwide educational network.

In November 1879, after the summer campers returned home, wandered into the deserted campgrounds: "I have never been in any place so dreamlike. Indeed, it was not so much like a deserted town as like a scene upon the stage by daylight, and with no one on the boards." Today, in nearby Pebble Beach is named after the author.

Pacific Grove, like and Monterey, became an artists' haven in the 1890s and subsequent period. Artists of the school in both Europe and the United States were seeking an outdoor venue which had natural beauty, so that Pacific Grove was a magnet for this movement. William Adam was an English painter who first moved to Monterey and then decided on Pacific Grove for his home in 1906. At about the same time , a German painter, arrived in Pacific Grove with his new bride. was an artist of aristocratic lineage who painted in Pacific Grove over a long period of time beginning in 1907; Judson's s decorate the halls of the .

For a number of years, lived in a cottage in Pacific Grove owned by his father, Ernest, who was Monterey County Treasurer. The cottage still stands on a quiet side street, without any plaque or special sign, virtually overlooked by most Steinbeck fans. In Steinbeck's book , a chapter is dedicated to describing a (probably fictional) rivalry that arose among the town's residents over the game of .

Local traditions include a Butterfly Parade, in which elementary schoolchildren dress in various costumes and march through town, and the Feast of Lanterns, a Chinese-styled pageant in which a high school girl and her companions act out a melodrama.

In the 1980's, Pacific Grove was the site of the pioneering microcomputer software house .

In recent years, Pacific Grove has seen a decrease in its population of young people with children, due to the high cost of housing and the mismatch between housing prices and the incomes available from the primarily tourist-centered local economy.

Pacific Grove contains several habitat types including marine, littoral, pine forest and mixed oak woodland. The famed breeding habitat for the is situated in the southern part of town imbedded in residential neighborhoods in mixed oak forests. These Monarchs migrate 2000 miles to reach Pacific Grove after their summer in , often soaring as high as 3000 meters. The black-and-orange butterflies spend the winter in the local Monterey Pine trees from Halloween until Valentine's Day each year. City Ordinance No. 352 makes it a misdemeanor to kill or threaten a butterfly, punishable by a $1000 fine.

The principal noise source in Pacific Grove is State Route 68. There are approximately 800 residents exposed to sound levels of 60 CNEL or above, making Pacific Grove noticeably more quiet than its neighbor Monterey, which has more tourist traffic and more through traffic (Hogan, 1980).

The town sits between its two well known neighbors, Pebble Beach and Monterey. Carmel-by-the-Sea is the next city, five miles to the south, and the community of is 30 miles south. Pacific Grove is a favorite vacation getaway for residents, located two and a half hours south of San Francisco.

Local radio stations include KAZU-FM - 90.3 . Television service for the community comes from the Monterey-Salinas-Santa Cruz designated market area (DMA). Local newspapers include the "".