The Norwegian Lutheran Church in the United States

The Norwegian Lutheran Church in the United States 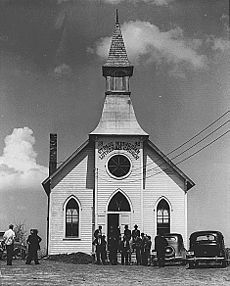 Most Norwegian immigrants to the United States, particularly in the migration wave between the 1860s and early 20th century, were members of the Church of Norway, an evangelical Lutheran church established by the Constitution of Norway. As they settled in their new homeland and forged their own communities, however, Norwegian-American Lutherans diverged from the state church in many ways, forming synods and conferences that ultimately contributed to the present Lutheran establishment in the United States.

The first organized emigrants from Norway to the United States were religious dissenters on the Restauration during 1825. It is widely considered that many of them had Quaker sympathies, but it is also clear that many were Haugeans, adherents of the lay preacher Hans Nielsen Hauge, who was a devout Lutheran but at odds with the established Norwegian State Church. Many of these emigrants subsequently relocated to the Fox River Settlement in LaSalle County, Illinois. By most accounts, the first minister at Fox River was a layman by the name of Ole Olsen Hetletvedt, a Haugean in leaning.[1]

In 1839, Elling Eielsen, a lay preacher, was a leader in the Haugean pietistic state church reform movement which encouraged evangelism and vigorous lay leadership. He made it his mission to return the growing Fox River Norwegian colony to the Lutheran fold. He organized a house of assembly and was ordained a Lutheran pastor in 1843, in the German-Luther tradition. Evangelical Lutheran Church in America, known as the Eielsen Synod, founded in 1846 at the Jefferson Prairie Settlement, was to bear his name. Eislsen was resident pastor at Jefferson Prairie from 1846 to 1872.[2]

The Jefferson Prairie Settlement Lutheran Church was organized in 1844. Claus Lauritz Clausen accepted a call during 1846 from Norwegian-settlers at Jefferson Prairie. Clausen relocated from the Muskego Settlement and made this the center for his activities among the settlements in southern Wisconsin and northern Illinois, remaining until 1853. Johannes Wilhelm Christian Dietrichson organized Koshkonong, Luther Valley, and eight other congregations in the state of Wisconsin and served as pastor at Koshkonong from 1846 until 1850.[3]

In February 1853, several Lutheran ministers including Claus Lauritz Clausen, Hans Andreas Stub, A. C. Preus, Herman Amberg Preus, G. F. Dietrichson, Jacob Aall Ottesen, and R. D. Brandt organized the Synod of the Norwegian Evangelical Lutheran Church in America, commonly known as the Norwegian Synod. It was organized at Koshkonong and Luther Valley near the Jefferson Prairie Settlement. Among the first denominational leaders was Ulrik Vilhelm Koren. The Synod adopted the ritual of the Church of Norway.[4]

Eielsen's Synod struck an uncompromising doctrinal line for many Norwegian immigrants. In 1848, Paul Andersen and Ole Andrewson broke out of Eielsen's Synod and started the first Norwegian and Scandinavian Church in Chicago, joining the Franckean Synod. The Frankean Synod was noted for its socially progressive views. They stayed in this synod for only three years before joining the Northern Illinois Synod. In 1860, the same group started yet another synod, the Scandinavian Augustana Synod over theological differences with English speaking Lutherans, who they believed were not faithful to Augsburg Confession.

Although many churches in America have their roots with Norwegian settlers, most have abandoned the Norwegian language in the primary service. Two churches in the United States still use Norwegian as a primary liturgical language. They are Den Norske Lutherske Minnekirke, built in 1912 in Chicago, Illinois, and Den Norske Lutherske Mindekirke in Minneapolis, Minnesota, formed in 1922.[6][7]

Norwegian Lutheran Church bodies in the US

Norwegian Lutheran colleges in the US