Michiel de Swaen (Dutch pronunciation: [mɪˈçiˑl də ˈzβ̞aˑn]; born in Dunkirk on 20 January 1654 – died in Dunkirk on 3 May 1707) was a surgeon and a rederijker from the Southern Netherlands.

Michiel de Swaen studied at the college of the Jesuits in his native town, where he probably got a humanist education, acquired chiefly through theatre, as in those days theatre was the foundation of a pedagogical education. After six years of schooling - three of which with a surgeon and three at an unknown place - De Swaen settled in Dunkirk (Duinkerke) as a surgeon and barber, at the same time being committed to the literary life in this city. Although in those days there were already 14 surgeons active in Dunkirk, De Swaen must have found enough patients as he complained in an occasional poem about the limited time he could spend on poetry.

The occupation of Dunkirk

The 17th century was a decisive period in the history of the Low Countries and the events of that time also considerably affected De Swaen’s own life. While the Republic of the Seven United Netherlands witnessed its Golden Age, the Southern Netherlands suffered war and misery under Spanish occupation. As the Protestants fled from the Catholic Southern Netherlands, then under Spanish rule, the once prospering port town of Antwerp started to decline as a metropolis and this to the benefit of towns and cities in Holland, like Amsterdam, 's-Gravenhage, Rotterdam and Utrecht.

In 1662, De Swaen being eight years old, England sold the Dutch city of Dunkirk to King Louis XIV of France. A year later, French became the mandatory formal language, which forced public life in this part of Flanders to take place entirely in French; since the Ordinance of Villers-Cotterêts it was illegal in France to speak any other languages than French. The French influence was nonetheless not felt at once; a significant part of the population continued to speak Dutch till the end of the 19th century. Moreover, all works De Swaen wrote were written in Dutch. It is only after 1700 that performances in the playhouses in Dunkirk were held exclusively French.

What De Swaen might have thought about the French occupation can indirectly be understood by reading the sonnet in which he looks back with unconcealed nostalgia on a journey in the Republic of the Seven United Netherlands; he visited Rotterdam, where he lodged at his son‘s place. De Swaen seems to have preferred the Dutch standards and values above those that his occupied country had to offer under French rule; there is no doubt about that after reading the sonnet aen den Heer Van Heel:[1]

Michiel de Swaen wrote in the Dutch standard language of that time, the one all Dutchmen can understand (alle Nederlanders konnen begrypen) as his friend, the rhetorician and printer Pieter Labus did put it into words. The admiration for the lost native country was a constant in the Dutch literature in that part of Flanders that had been occupied by the French and even today still is. De Swaen was probably the first who shaped this nostalgia into literature, in which shape it has been preserved in documents from the 18th century.

With this burdensome past in mind, even today France is not delighted with the heritage of a Dutch author like De Swaen. For many French Flemish citizens De Swaen is a symbol of their rich cultural past that helped define their actual identity. With the Belgian poet Guido Gezelle, he became one of the leading writers in the region on both sides of the frontier; the actual Belgian province of West Flanders and the part of Flanders under French occupation. He is also the representative par excellence of Dutch literature at a high level in the occupied part of Flanders.

Literature in the Netherlands

Dutch literature experienced its Golden Age in the Republic of the Seven United Netherlands in the 17th century. Some of the most high ranking works in 17th century Dutch literature were published in 1654, the year in which De Swaen was born, and in 1655: Trintje Cornelis by Constantijn Huygens, Lucifer by Joost van den Vondel and Alle de wercken (complete works) by Jacob Cats.

The movement of the rhetoricians came into existence as a kind of cultural social club in the 15th century: most rhetoricians in the Southern Netherlands in the 17th century originated from Flanders and Brabant. The rhetoricians were influenced by humanism and by the Counter-Reformation. Organised within a chamber of rhetoric, they devoted themselves to literature. In a way, they can be compared to the German "Meistersinger".[2] After the French had banished the Dutch language from public life in the occupied parts of Flanders, the chambers of rhetoric were left as the last and sole institution of Dutch culture.[3]

De Swaen as a rhetorician

By profession, De Swaen was a surgeon; he also formed part of the judicature. But he was also a member of the Dunkirk chamber of rhetoric, the Carsouwe, also known as Sint Michiel (Saint Michael was their patron saint); the chamber of the Kassouwieren (different ways of spelling for instance De Kersauwe are found; the word descends from the Dutch kersouw or daisy). [4] Michiel de Swaen, as a rhetorician, was befriended by rhetoricians from the region coming from cities such as Diksmuide and Ieper. He became a prince in 1687 at the Dunkirk chamber. Through the chambers of rhetoric, rhetoricians such as De Swaen kept in touch with the part over de schreve of the Southern Netherlands under Habsburg rule, even after the French occupation. For instance, in 1688 De Swaen was a guest in Veurne of the chamber the Kruys-Broeders. In 1700, De Swaen participated in a dramatics competition, called the “landjuweel“, organised by the Bruges chamber of rhetoric, the Drie Santinnen. To the amazement of many, he did not win the competition. His fellow men convinced him to write to the Bruges chamber of rhetoric to prove to them that they had made a mistake. Disappointed for only having obtained the second prize and facing the existing standards of the Bruges competition, he attempted to formulate a poetical theory Neder-duitsche digtkonde of rym-konst, which he made after the prototype of that by Aristotle.

By the end of his life, De Swaen pretended that he only stayed with the chamber of rhetoric as a member to keep in touch with his friends. Nonetheless he took his work as a rhetorician seriously, taking Vondel and others as an example.

Ruins of the abbey of Sint-Winoksbergen, destroyed by the French revolutionaries

De Swaen withdrew to a certain extent from his occupation with the chamber of rhetoric on the grounds of his Christian belief, although he had often been stimulated by his friends - the rhetoricians. And even though he had eagerly applied himself to the chamber of rhetoric in his childhood, he turned down all proposals to publish his work. Only the publication of Andronicus, a translation of a work by Jean Galbert de Campistron, had been granted by De Swaen in 1707. His translation of Le Cid by Corneille was published in Dunkirk by printer Pieter Labus without his approval in 1694. Most of his works were only published after his life, in Bruges or in Ghent, cities in the Southern Netherlands ruled by the Habsburgs. Many of his writings were preserved in the abbey of Sint-Winoksbergen, until the abbey was destroyed under the French Revolution. Therefore it is uncertain today whether we know all of De Swaen’s output.

De Swaen’s poems were often inspired by religion and have presumably been influenced by humanist authors such as Jacob Cats and Joost van den Vondel. His Catharina was obviously influenced by Vondel’s Maegdhen. After all, the Belgian Flemish poet Guido Gezelle later called De Swaen the Vondel of Duinkerke. De Swaen’s theoretical study Neder-duitsche digtkonde of rym-konst proves his erudition, especially his knowledge of works by 17th century French poet-playwright Pierre Corneille and Aristotle’s Poetics.

De Swaen’s religious convictions and his dedication to the Counter-Reformation are illustrated in works such as Het leven en de dood van Jesus Christus (The Life and Death of Jesus Christ). In this, preceded by Anton van Duinkerke, De Swaen followed the example of the moralising ‘’Diktatiek’’ by Poirtiers, which inspired Cats too. In addition, he wrote two tragedies Martelaarspelen or Treurspelen (tragedies about the martyrs Catharina and Mauritius).

De Swaen also showed an interest in European history and wrote an historical play De zedighe doot van Carel den Vijfden (about the death of Charles V). His texts dedicated to Charles V, Holy Roman Emperor, prove his attachment to the Netherlands and his religious conviction; he depicts Charles V as a true Christian hero. De Swaen’s most important work, De gecroondse leerse, which he himself described as a clucht-spel (comedy), is based upon an anecdote about Charles V and was tremendously popular.

Although De Swaen wrote in the Dutch standard language of his time, he was no stranger to classic and French authors. He handed over his Dutch translation of Pierre Corneille’s Le Cid to Barentin, an administrator of the French king Louis XIV. He also translated Jean Galbert de Campistron‘s Andronicus into Dutch. Many of his works show the influence of French classicism, such as De gecroonde leerse, split up into five parts and formulated in alexandrines.[5]

Catharina is a Christian tragedy about Saint Catherine of Alexandria in which the most important subject is the conflict between paganism and Christianity: the martyr Catherine of Alexandria was executed by order of the Roman emperor Maxentius. This work has a special place in Dutch literature as the genre it seems to belong to was almost non-existent in the Republic of the Seven United Netherlands.[6]

One day Jacquelijn, the wife of Teunis the shoemaker, goes to the market where she buys a capon for a family feast to take place that evening. Emperor Charles V is watching everything from a distance. Keen on the appetising capon, he commands his servant to follow Jacquelijn. She shows him where she lives. Charles decides to go there on his own. To get an invitation, the emperor offers wine to everyone. A day later, Teunis the shoemaker is summoned by the emperor. The rather worried poor Teunis goes to the Court where he recognises the generous guest of last evening. Charles V then appoints Teunis as his imperial shoemaker.

De gecroonde leerse is De Swaen’s only comedy and one of the most important works in Dutch literature. The work is played as well in the Southern as the Northern Netherlands and even in South Africa. Although the author describes the work as a clucht-spel (comedy), it displays nevertheless also features of French classic comedy.

Chronology of the Works 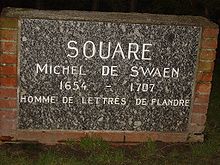 A square is dedicated to de Swaen in Coudekerque-Branche

De Swaen was unquestionably one of the most famous rhetoricians in the Low Countries during the 17th century. Today, together with Maria Petyt and Edmond de Coussemaker, he is one of the most prominent representatives of Dutch culture in France; Guido Gezelle called him the Vondel of Duinkerke.