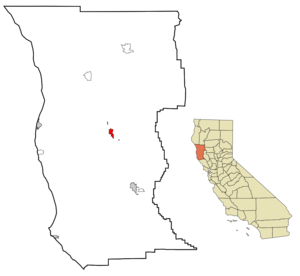 Located at the center of Mendocino County in the Little Lake Valley, convert|20|mi|0|sp=us north of Ukiah on (otherwise known as the ).According to the , the city has a total area of convert|2.8|sqmi|km2|1|lk=on|sp=us, all of it land.

There are occasional snow falls in Willits each year, with an average of convert|3.7|in|mm of snow annually. The most snow in one month was convert|20.0|in|mm in December 1964. [ [http://wrcc.dri.edu/ Western Regional Climate Center ] ]

The city is the eastern terminus of the (otherwise known as the "Skunk Train"), running through the forests to coastal Fort Bragg.

Every July, Willits hosts the Frontier Days & Rodeo, the oldest continuous and Independence Day celebration in California. It is also home to the and the .

The Willits area is the final home of the racehorse . , where Seabiscuit trained, recuperated, lived out his retirement and was buried, is located a few miles south of the city.

Willits High School is located on the north end of Willits. It is the home of the Wolverines.

Some notable names from Willits include , the drummer for , and , the bass player for . Although the band is usually referred to as "a San Francisco band", they were located in Willits at the time that their enduring hit single "Jenny (867-5309)" was released. The folk singer spent a year at Willits High School Fact|date=March 2007. Stagecoach bandit (aka Black Bart) stole multiple Wells Fargo boxes and mail from stagecoaches traveling through Willits. [http://www.blackbart.com/robberies.html]

Many residents of the city are currentlywhen embroiled in a class-action lawsuit against the , alleging that pollution left by the chrome plating plant, which was owned by Whitman and operated in Willits from 1964-1995, is responsible for a host of local health problems. [ [http://sfgate.com/cgi-bin/article.cgi?f=/chronicle/archive/2000/03/31/MN28871.DTL A Town Diseased and Torn / Willits split on whether illnesses are due to chemicals left by shuttered plant ] ] Litigator , known for the eponymous movie about her work in a similar case, is participating in the lawsuit on behalf of the plaintiffs.

Five miles east of Willits, the San Francisco Bay Area Council of the Boy Scouts Of America operates a convert|2200|acre|km2|sing=on camp named Wente Scout Reservation. Previously known as Willits Scout Ranch, the camp in 1984 "saved" the town of Willits during an emergency water crisis by releasing convert|20000|acre feet of water from their private lake into the town's water system.

Willits benefits economically from the widespread cultivation of marijuana in the surrounding hills. Mendocino County, like the rest of California, allows medical use of marijuana and folks with a physician-certified need for it are allowed to grow their own marijuana for medical use. Formerly, each person was allowed to grow up to 25 marijuana plants according to a Mendocino county ballot measure called "Measure G", which was voted into effect in 2000. In 2008, however, measure G was repealed, bringing the maximum number of plants allowed to 6 mature plants or 12 immature plants per person, as well as setting the maximum amount of dried marijuana allowed at 8 ounces (227 grams) per person, equal with the California state limits. This however, was ruled as being unconstitutional in court, and now has become an ongoing issue. Many growers are highly sophisticated breeders who grow for a variety of characteristics such as color, purple for example, and the quality of the psychoactive effects, e.g. "speedy" vs. "mellow." At $3,000 per pound wholesale, with approximately one pound of marketable bud per plant, marijuana cultivation makes a significant contribution to the local economy.

There were 1,935 households out of which 35.6% had children under the age of 18 living with them, 40.2% were married couples living together, 17.4% had a female householder with no husband present, and 36.4% were non-families. 30.2% of all households were made up of individuals and 14.6% had someone living alone who was 65 years of age or older. The average household size was 2.56 and the average family size was 3.15.