Particle board
For the alternative to plywood, see Oriented Strand Board. 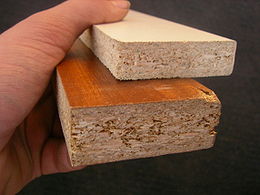 µCT-flight through a piece of particle board. View lateral, resolution 44,5 µm/Voxel.

µCT-flight through the same piece of particle board. View top.

µCT-flight through the same piece of particle board. View top, colorized.

Particle board, or particleboard (or chipboard in the UK, Australia, New Zealand and some other countries), is an engineered wood product manufactured from wood particles, such as wood chips, sawmill shavings, or even saw dust, and a synthetic resin or other suitable binder, which is pressed and extruded. Particleboard is a composite material.

Particleboard is cheaper, denser and more uniform than conventional wood and plywood and is substituted for them when appearance and strength are less important than cost. However, particleboard can be made more attractive by painting or the use of wood veneers that are glued onto surfaces that will be visible. Though it is denser than conventional wood, it is the lightest and weakest type of fiberboard, except for insulation board. Medium-density fibreboard and hardboard, also called high-density fiberboard, are stronger and denser than particleboard. Different grades of particleboard have different densities, with higher density connoting greater strength and greater resistance to failure of screw fasteners.

A major disadvantage of particleboard is that it is very prone to expansion and discoloration due to moisture, particularly when it is not covered with paint or another sealer. Therefore, it is rarely used outdoors or places that have high levels of moisture, with the exception of some bathrooms, kitchens and laundries, where it is commonly used as an underlayment beneath a continuous sheet of vinyl flooring. It does, however, have some advantages when it comes constructing the cabinet box and shelves. For example, it is well suited for attaching cabinet door hinges to the sides of frameless cabinets. Plywood has the potential to feather off in sheaves when extreme weight is placed on the hinges. In contrast, particle board holds the screws in place under similar weight.[1] Additionally, particleboard is favored for cabinet shelves that need to span a long width (30"or more) since it will not bow under the weight like plywood.

Modern plywood, as an alternative to natural wood, was invented in the 19th century, but by the end of the 1940s there was not enough lumber around to manufacture plywood affordably. Particleboard was intended to be a replacement. Its inventor was Max Himmelheber of Germany. The first commercial piece was produced during World War II at a factory in Bremen, Germany. It used waste material such as planer shavings, offcuts or sawdust, hammer-milled into chips, and bound together with a phenolic resin. Hammer-milling involves smashing material into smaller and smaller pieces until they pass out through a screen. Most other early particleboard manufacturers used similar processes, though often with slightly different resins.

It was found that better strength, appearance and resin economy could be achieved by using more uniform, manufactured chips. Manufacturers began processing solid birch, beech, alder, pine and spruce into consistent chips and flakes. These finer layers were then placed on the outsides of the board, with the central section composed of coarser, cheaper chips. This type of board is known as three-layer particleboard.

More recently, graded-density particleboard has also evolved. It contains particles that gradually become smaller as they get closer to the surface

Particleboard is manufactured by mixing wood particles or flakes together with a resin and forming the mix into a sheet. The raw material to be used for the particles is fed into a disc chipper with between four and sixteen radially arranged blades. The particles are first dried, after which any oversized or undersized particles are screened out.

Resin, in liquid form, is then sprayed through nozzles onto the particles. There are several types of resins that are commonly used. Amino, formaldehyde based resins are the best performing when considering cost and ease of use. Urea Melamine resins are used to offer water resistance with increased melamine offering enhanced resistance. Phenol formaldehyde is typically used where the panel is used in external applications due to the increased water resistance offered by phenolic resins and also the colour of the resin resulting in a darker panel. Melamine Urea phenolic formaldehyde resins exist as a compromise. To enhance the panel properties even further the use of resorcinol resins typically mixed with phenolic resins are used, but this is usually used with plywood for marine applications and a rare occasion in panel production.

Panel production involves various other chemicals — including wax, dyes, wetting agents, release agents — to make the final product water resistant, fireproof, insect proof, or to give it some other quality.

Once the resin has been mixed with the particles, the liquid mixture is made into a sheet. A weighing device notes the weight of flakes, and they are distributed into position by rotating rakes. In graded-density particleboard, the flakes are spread by an air jet that throws finer particles further than coarse ones. Two such jets, reversed, allow the particles to build up from fine to coarse and back to fine.

The sheets formed are then cold-compressed to reduce their thickness and make them easier to transport. Later, they are compressed again, under pressures between two and three megapascals and temperatures between 140 °C and 220 °C. This process sets and hardens the glue. All aspects of this entire process must be carefully controlled to ensure the correct size, density and consistency of the board.

The boards are then cooled, trimmed and sanded. They can then be sold as raw board or surface improved through the addition of a wood veneer or laminate surface.

Large companies such as IKEA and Fantastic Furniture base their strategies around providing well-designed furniture at a low price. In almost all cases, this means particle board or MDF or similar. IKEA’s stated mission is to “create well-designed home furniture at prices so low that as many people as possible will be able to afford it”. They do this by using the cheapest materials possible, as do most other major furniture providers. However, manufacturers, in order to maintain a reputation for quality at low cost, may use higher grades of particle board, e.g., higher density particle board, thicker particle board, or particle board using higher-quality resins. One may note the amount of sag in a shelf of a given width.

In general, the much lower cost of sheet goods (particle board, medium density fiberboard, and other engineered wood products), has helped to displace solid wood from many cabinetry applications.

Safety concerns are two part, one being fine dust released when particleboard is machined (e.g., sawing or routing), and occupational exposure limits exist in many countries recognizing the hazard of wood dusts.[2] The other concern is with the release of formaldehyde. In 1984 concerns about the initial indoor level of formaldehyde led the United States Department of Housing and Urban Development to set standards for construction of manufactured homes. This however was not solely because of the large amounts of pressed wood products that manufactured homes contain but also because of other building materials such as Urea-formaldehyde foam insulation.[3] Formaldehyde is classified by the WHO as a known human carcinogen.[4]

Comparison of solid wood to particleboard

Particleboard’s selling points compared to solid timber are its low cost, its availability in large flat sheets, and its ability to be decorated with melamine based overlays.

Solid wood has structural advantages over particleboard. It is stronger, particularly in extension (as required for horizontal spans), allowing it to support greater weights as shelves or other furniture; unless braced or built with thick material, particleboard shelves may visibly sag over time or snap near the fasteners.

The strength of particleboard, in the context of the application and cost, can offer advantages over solid wood on a cost basis. In cabinet carcase construction, relatively thick particleboard is used (typically ¾"), particularly in the sidewalls to support compressive loads of countertops and appliances, where its lower cost and adequate strength make it a frequent choice.

The reduced durability of particleboard furniture is a consequence of reduced strength in extension. This drawback contributes to damage when furniture is moved; if possible, the furniture should be disassembled to eliminate the possibility of damage in transit.

Most people consider solid wood furniture to be more attractive than particleboard. Recognizing this, furniture makers often cover particleboard with real or imitation veneers, in an effort to simulate the look of solid wood.

Some particleboard today is manufactured of rubber wood, mainly from Thailand and some regions of Malaysia. Tropical-mix wood accounts for a smaller percentage of the total production of particleboard from the Asian Region.

Tropical-mix wood is usually heavier in weight due to its difference in raw material and density (more compact in density).

Rubber wood has a bright look (yellowish) due to the color of rubber wood with black dots, tropical-mix wood has a consistent light brown finish.

Both products are great for lamination purposes, furniture making, speaker boxes, and other industries.