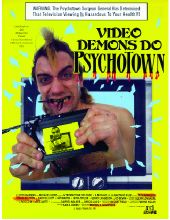 "Video Demons Do Psychotown" (also known as "Bloodbath in Psycho Town") is a written and co-directed by Alessandro De Gaetano and distributed by . The plot revolves around two film students who visit a spooky old town in order to film a documentary about it. However, things in the town are not what they seem and before they know it, they're the next target of a mysterious hooded serial killer.

*A poster for 'Video Demons Do Psychotown' can be seen in the background of a scene in Troma's .