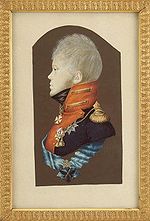 Constantine Pavlovich (Russian: Константи́н Па́влович) (27 April 1779 – 27 June 1831) was a grand duke of Russia and the second son of Emperor Paul I. He was the Tsesarevich of Russia throughout the reign of his elder brother Alexander I, but had secretly renounced his claim to the throne in 1823. For 25 days after the death of Alexander I, from November 19 (O.S.)/December 1 to December 14 (O.S.)/December 26, 1825 he was known as His Imperial Majesty Constantine I Emperor and Autocrat of All the Russias, although he never reigned and never acceded to the throne. The succession controversy became the immediate cause of the Decembrist revolt. Constantine was known to eschew court etiquette and to take frequent stands against the wishes of his brother Alexander I, for which he is remembered fondly in Russia, but in his capacity as the commander-in-chief and de facto viceroy of Congress Poland he is remembered as a ruthless ruler.[1]

Constantine was born at Tsarskoye Selo on 27 April 1779, the second son of the Tsesarevich Paul Petrovich and his wife Maria Feodorovna, daughter of Friedrich II Eugen, Duke of Württemberg. Of all Paul's children, Constantine most closely resembled his father both physically and mentally.

The direction of the boy's upbringing was entirely in the hands of his grandmother, the empress Catherine II. As in the case of her eldest grandson (afterwards the emperor Alexander I), she regulated every detail of his physical and mental education; but in accordance with her usual custom, she left the carrying out of her views to the men who were in her confidence. Count Nicolai Ivanovich Saltykov was supposed to be the actual tutor, but he too in his turn transferred the burden to another, interfering personally only on exceptional occasions, and exercised no influence upon the character of the passionate, restless and headstrong boy. The only person who exerted a responsible influence was Cesar La Harpe, who was tutor-in-chief from 1783 to May 1795 and educated both the empress's grandsons.

Catherine arranged Constantine's marriage as she had Alexander's; Juliane of Saxe-Coburg-Saalfeld, 14, and Constantine, 16, were married on 26 February 1796. Juliane was unhappy in the marriage, and separated from Constantine in 1799; she went back permanently to her German home in 1801. An attempt by Constantine in 1814 to win her back broke down in the face of her firm opposition. 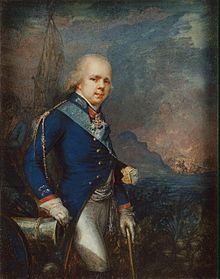 Portrait of Constantine at the Battle of Novi, a Russian victory

During this time, Constantine's first campaign took place under the leadership of Suvorov. The battle of Bassignano was lost by Constantine's fault; but at Novi he distinguished himself by personal bravery, so that the emperor Paul bestowed on him the title of tsesarevich, which according to the fundamental law of the constitution belonged only to the heir to the throne. Though it cannot be proved that this action of the tsar denoted any far-reaching plan, it yet shows that Paul already distrusted the grand-duke Alexander.

Constantine never tried to secure the throne. After his father's death (1801) he led a disorderly bachelor life. He abstained from politics, but remained faithful to his military inclinations, without manifesting anything more than a preference for the externalities of the service. In command of the Imperial Guards during the campaign of 1805, he had a share of the responsibility for the Russian defeat at the battle of Austerlitz; while in 1807 neither his skill nor his fortune in war showed any improvement.

After the peace of Tilsit he became an ardent admirer of Napoleon and an upholder of the Russo-French alliance. He therefore lost the confidence of his brother Alexander; to the latter, the French alliance was merely a means to an end. This view was not held by Constantine; even in 1812, after the fall of Moscow, he pressed for a speedy conclusion of peace with Napoleon, and, like field-marshal Kutuzov, he too opposed the policy which carried the war across the Russian frontier to victorious conclusion upon French soil. His personal behaviour towards both his own men and French prisoners was eccentric and cruel.[2]

During the campaign, Barclay de Tolly was twice obliged to send him away from the army due to his disorderly conduct. His share in the battles in Germany and France was insignificant. At Dresden, on August 26, his military knowledge failed him at the decisive moment, but at La Fère-Champenoise he distinguished himself by personal bravery. In Paris the grand-duke excited public ridicule by the manifestation of his petty military fads. His first visit was to the stables, and it was said that he had been marching and drilling even in his private rooms.

Constantine's importance in political history dates from when his brother, Tsar Alexander, installed him in the Congress Poland as de facto viceroy (however he was not the 'official viceroy' - namestnik of the Kingdom of Poland), with a task of the militarization and discipline of Poland. In the Congress Poland created by Alexander he received the post of commander-in-chief of the forces of the kingdom; to which was added later (1819) the command of the Lithuanian troops and of those of the Russian provinces that had formerly belonged to the Polish-Lithuanian Commonwealth (so called Western Krai). 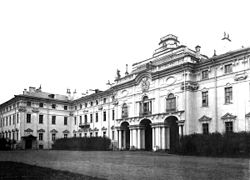 The upper terrace of the Constantine Palace in Strelna, 1921. Formerly a Swedish chancellor's estate, Strelna was chosen by Peter the Great as a place for his future summer residence in 1714

Alexander's policies were liberal by the standards of Restoration Europe; classical liberals lapped up the freedoms of education, scholarship, and economic development, but key deficiencies in Poland's autonomy of lack of control over the budget, military, and trade left them hungry for more.[3][4] The Kalisz Opposition, led by the brothers Bonawentura and Wincenty Niemojowski, pressed for reforms including more independence for the judiciary; Alexander, calling their actions an "abuse" of liberty, suspended the Polish parliament (Sejm) for five years, and authorized Constantine to maintain order in the kingdom by any means necessary.[5]

Into this scene of unrest entered Constantine, attempting to execute his brother's mandate to silence dissent. His efforts to strengthen the secret police (Ochrana) and suppress the Polish patriotic movements led to popular discontent among his subjects. Constantine also harassed the liberal opposition, replaced Poles with Russians on important posts in local administration and the army, and often insulted and assaulted his subordinates, which led to conflicts within the officer corps. The Sejm, until then mostly dominated by supporters of the personal union with Russia, saw his actions as disobedience of the very constitution of which he felt personally proud.

After 19 years of separation, the marriage of Constantine and Juliane was formally annulled on 20 March 1820. Two months later, on 27 May, Constantine married the Polish Countess Joanna Grudzińska, who was given the title of Her Serenity Duchess of Lowicz. Connected with this, he renounced any claim to the Russian succession, which was formally completed in 1822. After this marriage, he became increasingly attached to his new home, Poland.[6] 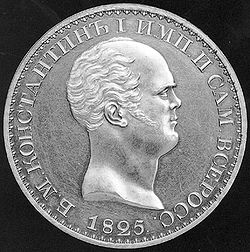 Constantine ruble, a rare silver coin issued during the Russian interregnum of 1825.

When Alexander I died on 1 December 1825, Grand Duke Nicholas had Constantine proclaimed emperor in St. Petersburg. In Warsaw meanwhile Constantine abdicated the throne. When this news became public knowledge, the Northern Society scrambled in secret meetings to convince regimental leaders not to swear allegiance to Nicholas. These efforts would culminate in the Decembrist revolt.

Under the emperor Nicholas I, Constantine maintained his position in Poland. Differences soon arose between him and his brother, in consequence of the part taken by the Poles in the Decembrist conspiracy. Constantine hindered the unveiling of the organized plotting for independence which had been going on in Poland for many years, and held obstinately to the belief that the army and the bureaucracy were loyally devoted to the Russian empire. The eastern policy of the Tsar and the Turkish War of 1828 and 1829 caused a fresh breach between them. It was due to the opposition of Constantine that the Polish army took no part in this war.

An assassination attempt was made on the life of Grand Duke Constantine which precipitated the November 1830 insurrection in Warsaw (the November Uprising).[7] Like the assassination, the recruitment of army units by the rebels failed; only two units joined them, and only the capture of the armory and the subsequent arming of the populace kept the revolt alive.[8] Constantine refused to send his troops against the revolutionaries, saying "The Poles have started this disturbance, and it's Poles that must stop it",[7] and left the suppression of the revolt in the hands of the Polish government. He himself retreated behind Russian lines but following the failure of the uprising expressed admiration for the valor of the Polish insurgents.

Constantine died of cholera at Vitebsk on 27 June 1831; he did not live to see the suppression of the revolution. His frequent stands against the wishes of the imperial family were perceived in Russia as brave, even gallant;[1] but in Poland, he was viewed as a tyrant, hated by the military and civilian population alike, and in Polish literature Constantine is portrayed as a cruel despot.[1][9]