"Last Exit to Springfield" is the seventeenth episode of The Simpsons' fourth season which originally aired March 11, 1993.[1] It was directed by Mark Kirkland and was the last episode written by Jay Kogen and Wallace Wolodarsky.[1] The plot revolves around Homer becoming President of the Springfield Nuclear Power Plant union and leading the workers of the plant in a strike in order to get their dental plan back.[3] Dr. Joyce Brothers guest stars as herself.[1] Fans have called this "the greatest Simpsons episode" according to the writers[4] and was named the best episode of the series by Entertainment Weekly in 2003.[5]

Homer dreams of a life of organized crime, a parody of The Godfather Part II

Mr. Burns sits in his office awaiting the union leader, who mysteriously disappeared after promising to clean up the union, so that they can discuss the proposed union contract. While perusing the contract, Burns becomes disgusted with the union demands and reminisces about simpler times in which disgruntled workers were simply walled up in coke ovens. Burns then decides to take on the union, and revokes their dental plan.

Meanwhile, at Painless Dentistry, the Simpson children are getting their teeth checked. It is discovered Lisa needs braces. When Marge informs Homer, he tells her not to worry about the cost, as the union had won a dental plan during a previous strike. Later, at a meeting of the local chapter of International Brotherhood of Jazz Dancers, Pastry Chefs and Nuclear Technicians, Carl announces that the newest contract requires the union to give up their dental plan in exchange for a free keg of beer for their meeting. Homer slowly comprehends that giving up their dental plan would require him to pay for Lisa's braces and jumps into action, reminding everyone how their dental plan has helped them all.

Carl proposes Homer be the new union president and he is promptly elected by a nearly unanimous vote. Mr. Burns watches Homer on his hidden cameras and is impressed with his energy. Burns invites Homer to his office to try to reach an agreement, but Homer misconstrues Burns's sly innuendos hinting that he wants to bribe him off as sexual advances. Homer quickly gets to his feet, saying he does not go for those "back door shenanigans" and promptly leaves, a series of events which establishes the idea in Burns's mind that Homer is a good negotiator.

Mr. Burns sends hired goons to the Simpsons' house in order to take Homer back to Burns' Manor to negotiate. While Burns is setting the agenda for the discussion, Homer is struck by the urgent need to use the rest room. Homer asks Burns where the rest room is and immediately leaves, leading Burns to conclude that Homer is a tough negotiator who is unwilling to even hear him out. At a later union meeting, Homer tries to resign, tired of meeting with Mr. Burns. The union misunderstands his frustration, and the members nearly unanimously decide to strike. Mr. Burns is undeterred by the strike and tries several methods of breaking it up, but fails. On an edition of Kent Brockman's talk show Smartline, Burns is allowed an opening tirade and he threatens dire events if the strike is not concluded.

Fifteen minutes later, Burns and Smithers march to a secret room in the Power Plant and turn off the power for the entire town. The strikers do not lose hope and begin to sing. Burns, confident he has broken the union's spirit, steps out on his balcony to hear their reaction but is disarmed by their unity and optimism. Burns finally calls a meeting with Homer to concede to their demands on one condition: that Homer resign as union president. Homer celebrates madly, leading Burns to finally realize that Homer is not the "brilliant tactician" he thought he was. With the Simpson family insured again, Lisa gets her perfect new braces and she, the Simpson family, and the dentist gather and laugh (with the aid of an open container of laughing gas) as the episode comes to a close.[1][2][3] 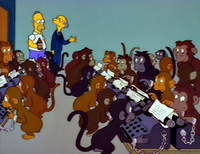 The idea for this episode came from Mike Reiss, who thought it would be funny if the plant went on strike. The writers of the episode, Jay Kogen and Wallace Wolodarsky, would later add the dental plan aspect of the plot.[6] In several scenes, Mr. Burns is portrayed as the Devil who is tempting Homer and showing him what he could have. During the production of this episode, an ABC camera crew was allowed into the rewrite room, which Al Jean says he regrets because they were working on stage direction, and they came off as not being very funny.[6]

The producers originally asked Anthony Hopkins and Clint Eastwood to provide the voice of the dentist, Dr. Wolfe, but they both turned the role down.[6] Anthony Perkins was later asked to fulfill the role and he agreed, but died before the role could be recorded. In the end, the role went to Simpsons regular Hank Azaria. As well, the original panelist on Smartline was supposed to be O. J. Simpson, but he turned it down, which the writers believe was a good thing.[6] 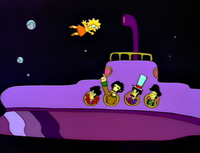 Lisa's dream sequence, based on Yellow Submarine.[2] Everything in the sequence had to be slightly changed for copyright reasons.[6]

The title of the episode is a homage to Hubert Selby Jr.'s book Last Exit to Brooklyn. The body of the union president is seen buried under a football field, a homage to the mystery surrounding the whereabouts of Jimmy Hoffa and his alleged burial at New Jersey's Giants Stadium.[6] Mr. Burns' outfit in the flashback to his childhood is based on Buster Brown.[7] Homer's imagination of a life of organized crime is based on Don Fanucci's first appearance in The Godfather Part II, accepting donuts rather than a necklace and an orange.[8]

Lisa has a dream that echoes The Beatles movie Yellow Submarine, which Al Jean says had to be changed slightly for legal reasons. This included changing the name of the short sequence to "purple submersible"; George Harrison calls her "Lisa in the Sky", while Paul McCartney notes "no diamonds though".[6] The scene where Lisa acquires her monstrous braces and breaks her mirror is based on a scene from the 1989 Tim Burton film Batman where Jack Napier discovers his transformation into the Joker.[2]

When Homer is escorted by the hired goons into what appears to be Burns' conservatory, a Burns-headed bird is sitting in front of the screen, which then flies away. This is a reference to the cockatoo in Citizen Kane. Lenny asks Lisa to play Mason Williams' song "Classical Gas."[4] Before Mr. Burns shuts off the power to the town in response to the strike, he says, "From Hell's heart I stab at thee" which is a reference to Captain Ahab's curse, from the novel Moby-Dick.[9] The workers' resistance to the power outage, and Mr. Burns's response, is a parody of How the Grinch Stole Christmas.[7]

In its original broadcast, "Last Exit to Springfield" finished 19th in ratings for the week of March 8-14, 1993, with a Nielsen rating of 13.7, equivalent to approximately 12.8 million viewing households. It was the highest-rated show on the Fox network that week, beating COPS.[10]

This episode is generally ranked as being one of the best of all time and is on a number of Top 10 lists,[6] and the BBC stated it is "frequently cited as the show's best-ever episode."[11] An Entertainment Weekly article from January 2003 looking back at the top 25 episodes of the series chose this episode as the show's greatest episode, saying "this episode is virtually flawless, the product of a series at the height of its creative powers -- when the satire was savage and relevant" and "the stuff of syndication legend: Burns facing down brilliant labor kingpin Homer Simpson; Homer Simpson facing down his own brain (DENTAL PLAN!/Lisa needs braces!); Grampa rattling on about wearing onions on his belt. Last Exit is a glorious symphony of the high and the low, of satirical shots at unions."[5] In his book, Planet Simpson, Chris Turner calls it the best episode of the series, saying "Episode 9F15 of The Simpsons should be taught in schools, in history, economics, social studies, literature and art class. It's flawless".[12] He also called it "the funniest half-hour in TV history", and provided a full analysis of the episode, only criticizing the chalkboard and couch gags.[12] He maintains that he chose the episode as best ever before Entertainment Weekly's list was published.[12]

In 2003, to celebrate the show's 300th episode, USA Today published a top 10 chosen by the webmaster of The Simpsons Archive, which had this episode in first place.[13] The BBC website says, "This fine episode contains several of our favourite sequences ... A classic, and the series' most marked expedition into the surreal - up to this point."[2] MSNBC, who listed the episode as their favorite, stated, "This is the episode that every self-respecting Simpsons geek must be able to recite verbatim."[14] Michael Moran of The Times ranked the episode as the sixth best in the show's history.[15]

Director Mark Kirkland considers this episode to be one of the most surreal episodes that he has worked on because it has a lot of story crammed into it, lots of parodies and contains several visual sequences.[7] Al Jean has also called this one of the "craziest" episodes.[6] Homer's line "uh... Yeah" after being asked if he found the bathroom is one of Jay Kogen's favorite Simpsons jokes.[8] The episode's parody of Batman was named the 30th greatest film reference in the history of the show by Total Film's Nathan Ditum.[16]

The scene in the episode in which Mr. Burns shows his room with a thousand monkeys working at a thousand typewriters, a reference to the infinite monkey theorem, has inspired a real-life experiment about the theorem.[17] The episode has become study material for sociology courses at University of California Berkeley, where it is used to "examine issues of the production and reception of cultural objects, in this case, a satirical cartoon show", and to figure out what it is "trying to tell audiences about aspects primarily of American society, and, to a lesser extent, about other societies."[18]