The humanitarian response to the 2004 Indian Ocean earthquake was prompted by one of the worst natural disasters of modern times. On 26 December 2004, the earthquake, which struck off the northwest coast of the Indonesian island of Sumatra, generated a tsunami that wreaked havoc along much of the rim of the Indian Ocean. Particularly hard-hit were the countries of India, Indonesia, Sri Lanka, and Thailand. Nearly 230,000 people were killed, tens of thousands more were injured, and 10 million became homeless and displaced.

The tsunami exacted a light toll on coastal communities and especially fishermen and fishmongers in the region.[1] In India and Thailand, government and Civil Society Organizations were able to mobilize resources and responded as quickly as possible. India also provided some assistance to neighboring countries and was the first nation to respond by sending naval ships and personnel to the neighboring countries due to the proximity. The people and governments in the nations of Sri Lanka and Indonesia were to some extent overwhelmed by the enormity of the catastrophe, especially in inaccessible areas. 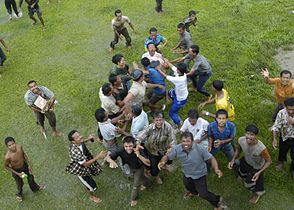 Indonesian refugees wait for a heli-drop of much needed supplies.

The first tasks of the governments and humanitarian aid agencies were to ensure access to food and clean water, and medical care for the injured. The World Health Organization warned that the number of deaths from preventable diseases such as cholera, diphtheria, dysentery and typhoid could rival the death toll from the disaster itself. These diseases are largely spread by loss of normal sanitary facilities, the shared use of inadequate facilities in makeshift refuges, and the lack of clean water.

Many usual sources of water were spoiled by salt water, broken by the force of the tsunami, or contaminated with bodies of dead people or livestock, requiring water purification equipment or trucking portable water into the affected region. Other high priorities were delivery of medical supplies and personnel to overwhelmed hospitals and clinics, tent shelters and clothing to people who have lost their houses and belongings, and food, especially baby food. Several governments appealed for body bags to assist in the safe disposal of corpses.

Information about the impact of the tsunami on individual countries is available for:

The Tsunami Evaluation Coalition has carried out a series of evaluations of the response and published an initial findings report in December 2005, currently hosted by ALNAP. This report found that while initial needs were broadly met, in part by local actors, there was room for improvement in the way that agencies were meeting ongoing needs. Key areas for improvement in the current agency responses were identified as:

Despite a number of unique factors, the well-funded tsunami response provides a significant opportunity for the aid community to learn how to improve its performance in future responses. The main report from the Tsunami Evaluation Coalition is expected in July 2006.

Governments, humanitarian organisations, Asian expatriates and individuals around the world scrambled to offer aid and technical support. Such was the global scope of the disaster that the International Charter on Space and Major Disasters was activated in quick succession by the French Civil Protection Agency,[2] the Indian space agency ISRO,[3] and by UNOOSA on behalf of UNOPS,[4] thus providing a wide variety of humanitarian satellite imagery to aid and rescue organisations. The World Bank initially estimated the amount of aid needed at USD 5 billion.[5] Although countries are providing relief funds, the UN had criticised both the US and Europe for allocating inadequate resources. By 1 January 2005 over USD1.8 bn (GBP1bn) had been pledged.

In wake of the disaster, Australia, India, Japan, United States formed a coalition to co-ordinate aid efforts to streamline immediate assistance. However, at the Jakarta Summit on 6 January, the coalition transferred responsibilities to the United Nations.

Sailors of USS Abraham Lincoln prepare for aerial resupply drops by US helicopters.

On 27 December UN Undersecretary-General for Humanitarian Affairs Jan Egeland reportedly categorised charitable contributions of rich countries as "stingy",[6] but was widely misinterpreted in the press as categorising the response to the tsunami in this manner.[7] Speaking at a press conference later, Mr. Egeland stated, "It has nothing to do with any particular country or the response to this emergency. We are in early days and the response has so far been overwhelmingly positive".[8]

The U.S. government, led by President George W. Bush and Secretary of State Colin Powell, added another USD 20 million on 28 December to their original pledge of USD 15 million, bringing the total up to USD 35 million, not including direct aid to be rendered by naval vessels dispatched to the region.[9]

Initially, the U.S. Navy dispatched P-3C Orion patrol aircraft and an aircraft carrier to assist with relief operations. The P-3C surveillance aircraft conducted survey operations, including search-and-rescue efforts, and cargo planes shuttled supplies to shelter the living and dry ice to preserve the dead from Bangkok to affected areas.[10]

On 31 December the US pledge was increased tenfold to USD 350 million,[11] with President Bush saying that that amount will probably increase. President Bush also signed a decree ordering flags to be flown at half-mast during the first week of the new year.

Serious concern has been raised that the international relief effort may falter if nations do not honour their pledges. On 3 January, UN Secretary-General Kofi Annan urged the donor nations to ensure that their pledges will be fully honoured, pointing to previous cases where "we got lots of pledges, but we did not receive all the money".[12]

On 5 January 2005, as countries jockeyed to make large donations, Jan Egeland said, "I'd rather see competitive compassion than no compassion", adding that too many countries were making pledges that may never arrive.[13] Following the previous year's Bam, Iran earthquake, which killed 26,000 people, Iranian officials claim to have received just USD 17.5 million of the USD 1 billion originally pledged.[13] In mid-March, the Asian Development Bank reported that over USD 4 billion in aid promised by governments was behind schedule. Sri Lanka criticised the nations and organisations that clamoured to pledge donations, "Not a penny had come through yet. We are doing the relief work with our government money. Sri Lanka is still waiting for the money pledged by the donors. Money pledged by the people has been pledged to the NGOs."[14]

Sri Lanka's Foreign Minister, Laxman Kadirgamar, stated in a BBC interview, "A lot of aid which has been coming in latterly[15] is I'm afraid – I'm sorry to say – not very useful. For instance there was a container full of teddy bears. They're obviously given with good will, nobody says no to that." The patience of tsunami affected nations are being stretched, "Now the government had worked out a scheme that until 26 April everything that has come, everything that will be on the seas will be admitted tax free. After that, no!". Kadiragamar went on to say, "For instance we do not need rice, we are expecting a bumper harvest, anyone who sends rice is wasting their time and money."[14]

Many commentators claim excessive and competitive donor responses threaten less dramatic but equally important relief efforts elsewhere. "While everyone opens up their coffers for these disasters, the ongoing toll from malaria, AIDS and tuberculosis is much larger than these one-time events", said Enriqueta Bond, president of the US Burroughs Wellcome Fund. "We would do more good to invest in prevention and good public-health measures such as clean water". Tony Blair, the UK prime minister, also expressed concern that tsunami aid could detract from other pressing development needs. He pointed out that there was a disaster comparable to a "preventable tsunami every week in Africa", where 10,000 people die daily from AIDS and malaria alone.[16]

In the early stages, before the extent of the disaster was clear, Sri Lanka refused Israel's offers of aid, objecting to the inclusion of 60 Israeli soldiers in the 150-person mission planned by Israel's army, to set up field hospitals, including internal medicine and paediatric clinics, an Israeli army spokesman reported to BBC. Later, the Israeli humanitarian organization sent a jumbo jet carrying 18 tonnes of supplies to Colombo, however, and a rescue-and-recovery team from the Jewish ultra-Orthodox organization ZAKA arrived in Colombo with equipment used for identifying bodies, as well as body bags.[17] Corruption, bureaucracy and nationalism hampered the humanitarian response in Indonesia.[18] The Indonesia government is reported to have flown Muslim militants into Aceh to help the relief effort.[citation needed] On 12 January, the Indonesian government put restrictions on the movement of journalists and aid workers, ostensibly for their protection from Acehnese insurgents. However, there were concerns that this was a clumsy attempt by the government to gather control over, and credit for, relief efforts in an attempt to gain an edge over the rebels.

In Sri Lanka, only 30% of those eligible affected by the tsunami as of 10 February had received any aid, and there are allegations of local officials giving aid only to their supporters, some of whom were not victims of the tsunami. The Sri Lankan government has set up a "Special Complaint Unit" for citizens to record grievances.

The following table is a partial listing of cash commitments from various governments and nongovernmental organisations, taken from[19][20] and other sources:[21][22]

Pledged amounts as percentages of GDP

The table below examines the amounts pledged for humanitarian efforts in light of rough national economic power, which is arguably a more useful measures. There are a number of caveats that should be kept in mind while reading the table:

With all the caveats in mind, the following table lists some countries in order of nominal aid donated divided by GDP.

Pledged amounts on a per capita basis

- Another way of looking at the figures.

The income of non-governmental organisations and multilateral organisations is derived from governments and individuals. For example, the African Union's contribution is financed by its member states. The following "contributions" may be viewed as either a diversion of funds originally earmarked for other purposes or increased donations to the contributing organisation.

A much more complete list of American corporate donations may be found at [3].

There were numerous large-scale fundraising events with hundreds of participants around the world.

Two of the nations most affected by the tsunami, India and Sri Lanka, are leading cricket-playing nations. The International Cricket Council has launched the World Cricket Tsunami Appeal to raise funds for the humanitarian effort. The highlight of this was a two-match One Day International series between a World XI and an Asian XI.

It has been reported on Cricinfo that the first of these matches raised AUD 8.4 million.

Other matches, such as those in late January 2005 between the New Zealand national team and a World XI also had fundraising as a primary aim.