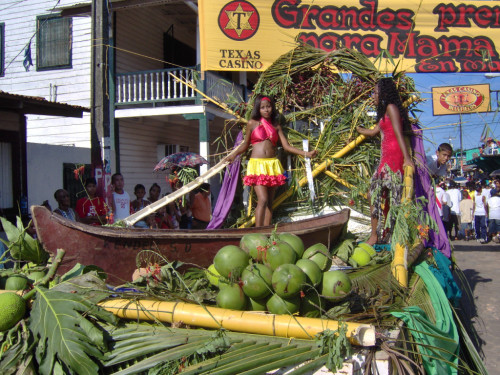 Bluefields is the capital of the of the same name, and of R.A.A.S. in . It was also capital of the former Zelaya department which was divided into North and South Atlantic Autonomous Regions. It is located on Bluefields Bay at the mouth of the Escondido River.

Generally, it is accepted that the origin of the city of Bluefields is connected with the presence on the n Caribbean coast of an pirates, subjects of powers at the time hostile to . These pirates used the Escondido River to rest, to repair damages and to be provisioned. By then, the territory of the present municipality was populated by the native towns of Kukra and Branch. In 1602 one of these soldiers of fortune chose the bay of Bluefields as his center of operations due to its tactical advantages, a named Blauveldt or Bleeveldt, and from him originates the name of the municipality.

Consensus exists that the black Africans first appeared in the Caribbean coast in 1641, when a Portuguese ship that transported s wrecked in the Miskito Cays. From the original settlement the bay began to be populated; the British subjects burst in 1633 and from 1666 they were already organized into colonies, and by 1705 there were authorities established. In 1730 the colony of Bluefields came to depend on the British government of . For this, the alliance of the English Miskito ethnic group was decisive, and the British provided them with armaments that allowed them to subdue the other ethnic groups of the Caribbean coast, the Sumu and Rama.

In 1740 the s yielded to the on the territory, and for 1744 the transfer of English colonists was organized from Jamaica toward the ; they brought along with them black slaves. French citizens were also installed. The area was a British until 1796, when England recognized the sovereignty of Spain on the Mosquito Coast; the English subjects also abandoned the islands, but the Spaniards did not take firm positions in them.

The was installed in 1847, and in 1860 the Reserve was created in the Caribbean Coast of , by an agreement between the British and American governments in which Nicaragua as a country did not have part, and the English crown intervened again, putting it under its protection. The city of Bluefields was declared capital of that Reserve.

On the other hand, slaves originating in that sought freedom on the Nicaraguan coast continued arriving during the greater part of the 19th century.

The plan of 'Europeanization' of the natives was completed by the 1880s, when English and Americans expanded the production of banana and wood, creating an enclave ; by the 1880 Bluefields was already a city of cosmopolitan character, with an intense commercial activity.

also brought a marked process of social differentiation, by which the races and s were distributed spatially and in terms of work: in the dome the white population represented the interests of the foreign businesses; the mulattoes worked as s and in working class occupations; the blacks had their niche in physical work, and the native population were employed as servants and for other smaller works. In 1894 the government of Nicaragua incorporated the Miskito Reserve into the national territory, extinguishing the Miskito , and on October 11, 1903 Bluefields was proclaimed capital of the Department of Zelaya.

The city is located beside the bay of its same name Bluefields; it is integrated by 17 neighborhoods including the port of , located on the peninsula of its same name El Bluff. This peninsula has become a true island that closes the Bay of Bluefields on the east side little by little. El Bluff has an extension of 1.29 km² and it is about 8 km from Bluefields.

The municipal jurisdiction of Bluefields has several municipal headquarters and rural communities that are: