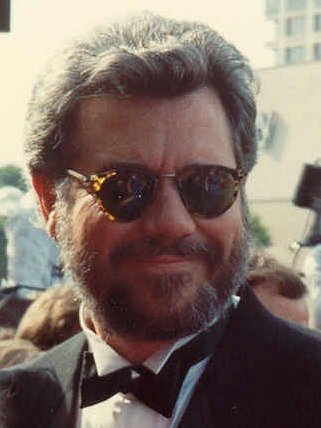 John Bernard Larroquette (born , ) is an American film and television . His best known roles include Dan Fielding on the series "" and Mike McBride in the series "McBride". He joined the cast of "" in fall 2007.

Larroquette's first role was uncredited, as a U.S. soldier in "" (1966). He also had an uncredited role as the narrator of "" (1974). His most memorable non-comedy role was in the 1970s NBC program "Baa Baa Black Sheep" where he portrayed a WWII U.S. Marine Corps fighter pilot named Luke Witkowski. Larroquette first broke into TV on the soap opera "". During the filming of the / hit comedy film ""(1981), his nose was nearly cut off in an accident. He was running down a hall into a door which was supposed to open, but it didn't, and his head went through the window in the door.

"The John Larroquette Show", other roles

Larroquette later starred on "" as the character John Hemmingway. The show was lauded by critics and enjoyed a loyal cult following. In 1998, he guest-starred on three episodes of the "". His portrayal of , a wealthy, wisecracking, narcissistic psychopath with a habit of stabbing his lovers to death, won him his fifth Emmy Award. He reprised the role for one episode in 2002, for which he was once again Emmy-nominated. He also appeared on an episode of "" as Lionel Tribbey, White House Counsel, and later on an Episode of the show House.

In 2003, Larroquette narrated the remake of "The Texas Chainsaw Massacre", this time fully credited. From 2004 to 2006, he played the title role in the "McBride" series of American TV movies. He currently stars as Carl Sack in the TV series . He also guest starred in the drama "House" where he played a previously catatonic father awakened to try to save his son, and on Chuck as veteran spy Roan Montgomery. [http://www.theinsideronline.com/news/5917/ Celebrity News, Gossip, Photos, Videos and more on The Insider ] ]

Larroquette has three children with his wife, Elizabeth Ann Cookson. He is also a registered member of the Libertarian Party, a fact to which he alluded when he made an appearance on Dennis Miller's show on the "Varsity Panel".fact|date=March 2008 During an appearance on 's show, Larroquette mentioned that he almost quit the party when they nominated to run for governor of New York.fact|date=March 2008

Larroquette was born and raised in New Orleans, LA in the middle ninth ward. He lived in New Orleans until he was 22. He returned there after Hurricane Katrina and found the home in which he lived until age 12. He stated that returning to New Orleans after the hurricane was like returning to a post-apocalyptic world.fact|date=March 2008

His cell phone number is reputedly 310-691-6496. This number was given to the title character , portrayed by actor (also known as WWE wrestler "") in the movie "", and he calls it and reaches Larroquette's character, Vaughn Smallhouse. If one calls it in real life, one gets a voice mail for John Larroquette (though the voice identifying him is not his), though it may not be a phone number he actively uses.

A rumor circulated on the internet that Larroquette suffered from (IBS); Larroquette once did serve as a spokesman for the disease; however, on January 14, 2008, while appearing as a guest on The Bob Rivers Show on KZOK he stated that the IBS rumor was completely false [ [http://www.bobrivers.com/player/player.asp?ID=7126&SPEED=2&atype=onair The Bob Rivers Show Audio Player ] ] . He noted this falsehood again on March 28, 2008 during the Tonight Show with Jay Leno.

Other Past Health Issues

In the seventies and eighties, Larroquette battled . On The Tonight Show with Jay Leno on March 10, 2007 he joked, "I was known to have a cocktail or 60".fact|date=March 2008 He had also revealed that he'd suffered from black outs when drinking, a condition he describes as 'horrible'.fact|date=March 2008 To illustrate the severity of these black outs, he told Leno about one experience he had while drinking in which he woke up from a nap, realizing he was on a plane and had no idea where it was headed. He said that he was too embarrassed to ask where they were headed. (He eventually found out the plane was headed from Los Angeles to his hometown of New Orleans.) ["The Tonight Show with Jay Leno", October 4, 2007.]

Larroquette enjoys collecting rare books. Authors whose works he has focused on include , , , and .He is an avid fan of the .fact|date=March 2008

Larroquette has appeared on the "" on numerous occasions, as well as several appearances on both 's shows. He has hosted "" twice. He also won another for his guest spot on "."