Death of a Doxy

Death of a Doxy

Death of a Doxy is a Nero Wolfe detective novel by Rex Stout, first published by Viking Press in 1966.

"My sister was a what?"
"D,O,X,Y, doxy. I happen to like that better than concubine or paramour or mistress. I don't —"
I stopped because I had to, to protect my face.

— Archie Goodwin, conversing with Stella Fleming in Death of a Doxy, chapter 5

Orrie Cather, one of Wolfe's operatives, has been secretly seeing a wealthy man's kept mistress at her secret lovenest. He is arrested when she turns up dead.

Orrie is the only one of Wolfe's operatives to have the plot of two Stout books turn on his actions: Death of a Doxy and Stout's final work, A Family Affair . 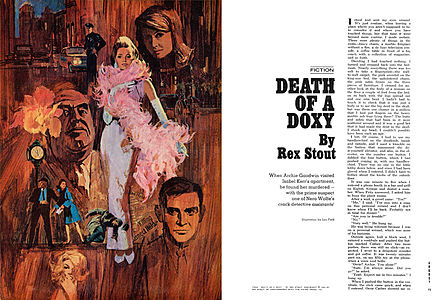 Illustrated by Lou Feck, an abridged version of Death of a Doxy appeared in
Argosy magazine (June 1967)

Orrie is finally going to tie the knot. He's engaged to marry Jill Hardy, a stewardess. But for months, Orrie's also been keeping company with Isabel Kerr, an ex-showgirl. Orrie has some time available because Jill works international flights. Isabel has time available because she no longer performs: rather, she occupies a plush apartment that's paid for by another gentleman friend who visits her just two or three times a week.

Isabel objects to Orrie's marriage plans. She has taken some of his personal and professional belongings and stashed them in her apartment. Isabel threatens to show them to Jill and thus quash the marriage. So, Orrie asks Archie to get into Isabel's apartment, find his possessions, and get them back. When Archie does enter the apartment, he finds not Orrie's belongings but Isabel's body. Archie withdraws to meet with Orrie, but otherwise keeps the news to himself.

Isabel's sister Stella later discovers the body. The police find Orrie's possessions in the apartment and arrest him on suspicion of murder. In a meeting to consider whether Orrie is guilty, Wolfe, Archie, and Fred are all unsure, but Saul — via some convoluted reasoning — concludes that he is innocent, and Wolfe undertakes to demonstrate it.

Wolfe must determine who knew about Isabel's apartment. Orrie has given Archie some names — Avery Ballou, who pays the bills, Stella Fleming and her husband Barry, and a nightclub singer named Julie Jaquette. Archie visits Stella and Barry, and learns that Stella is frantic to keep a lid on the nature of her sister's living arrangements. Stella's concern for Isabel's reputation is such that she tries to claw Archie's face when he refers to Isabel as a "doxy."

Archie corrals a reluctant Ballou, and Wolfe coerces his cooperation by threatening disclosure of his relationship with Isabel. It turns out that Ballou has already been subjected to blackmail, by someone named Milton Thales. Ballou thinks that Thales is really Orrie, but Wolfe deduces Thales' true identity and assumes that he is Isabel's murderer.

Wolfe sends Saul to bring Julie Jaquette. When she dances into Wolfe's office, Miss Jaquette puts on a performance, first singing and then demanding to see Wolfe's orchids. She displays a cynicism regarding human behavior that Wolfe regards as similar to his own. Julie agrees to act as bait for the murderer and is nearly killed herself. For her protection, she is moved into the brownstone, where she helps Wolfe and Archie force Thales' hand after Wolfe offers $50,000 cash for her assistance.

In most Nero Wolfe novels and novellas, there is at least one unfamiliar word, usually spoken by Wolfe. Death of a Doxy contains these four (the page references are to the Bantam edition): 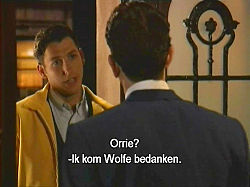 "I came to thank Wolfe," Orrie (Trent McMullen) tells Archie (Timothy Hutton) in a scene from "Death of a Doxy" seen only in the international version of A Nero Wolfe Mystery

An adaptation of Death of a Doxy opened the second season of the A&E TV series A Nero Wolfe Mystery (2001–2002). Directed by Timothy Hutton from a teleplay by Sharon Elizabeth Doyle, "Death of a Doxy" aired April 14, 2002, on A&E.

"Death of a Doxy" is one of the Nero Wolfe episodes released on Region 2 DVD in the Netherlands by Just Entertainment, under license from FremantleMedia Enterprises. A Nero Wolfe Mystery — Serie 2 (2010) was the first DVD release of the international version of the episode, which includes a brief closing scene in which Orrie visits the brownstone. The Netherlands release has optional Dutch subtitles and, like the A&E DVD release, presents the episode in 4:3 pan and scan rather than its 16:9 aspect ratio for widescreen viewing.[4]

In his limited-edition pamphlet, Collecting Mystery Fiction #10, Rex Stout's Nero Wolfe Part II, Otto Penzler describes the first edition of Death of a Doxy: "Yellow boards, gray cloth spine; front cover printed with a blue design; spine printed with blue lettering; rear cover blank. Issued in a red, black, and white dust photographic wrapper which has been die cut to reveal the blue printed design on the front cover. … The dust wrapper is noteworthy for its ugliness and the singularly misconceived design element of the pointess die cut."[6]
In April 2006, Firsts: The Book Collector's Magazine estimated that the first edition of Death of a Doxy had a value of between $100 and $200. The estimate is for a copy in very good to fine condition in a like dustjacket.[7]

The far less valuable Viking book club edition may be distinguished from the first edition in three ways: