The Adventure of the Resident Patient

The Adventure of the Resident Patient 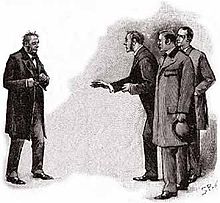 Doctor Percy Trevelyan brings Holmes an unusual problem. Having been a brilliant student but a poor man, Dr. Trevelyan has found himself a participant in an unusual business arrangement. A man named Blessington, claiming to have some money to invest, has set Dr. Trevelyan up in premises with a prestigious address and paid all his expenses. In return, he demands three-fourths of all the money that the doctor’s practice earns, which he collects every evening, going over the books thoroughly and leaving the doctor five shillings and threepence (5/3d) of every guinea (21 shillings or 1 pound/1 shilling in pre-decimalized currency) from the day’s takings. Blessington is himself infirm, it turns out, and likes this arrangement because he can always have a doctor nearby.

Everything has gone fairly well for the doctor since the arrangement began. Now, however, something has happened to Mr. Blessington. He has become excitable and agitated, this after he said that he had read about a burglary somewhere in the city.

Shortly thereafter, the doctor acquired a new patient, a Russian nobleman with cataleptic fits. His grown son brought him in the evening while Mr. Blessington was taking his usual walk. The son insisted on waiting out in the waiting room while the doctor saw his father. During the consultation, the patient had a fit, sitting bolt upright and going quite rigid. The doctor rushed for some nitrite of amyl for his patient to inhale, but upon returning, found that both his patient and his son had left.

Surprisingly, the same two men came back the next evening, the son claiming that he had seen his father walk out into the waiting room and assumed the consultation was over. He then had taken his father home, only later realizing that something was not quite right. The doctor had another consultation with the Russian gentleman, and after they had left, Mr. Blessington was utterly beside himself. Someone had been in his room. There were footprints to prove it. It could only have been the Russian nobleman’s son, but why did he go in there? Nothing had been disturbed or stolen.

At this point in Dr. Trevelyan’s story, Holmes thinks that it would be wise to go to the doctor’s Brook Street practice right away to see for himself what this odd case is all about. He discovers firsthand just how paranoid Blessington has become: he greets Holmes, Watson, and Trevelyan with a gun, but the doctor convinces him that the visitors mean no harm.

Holmes asks Blessington who these men are, and why they want to molest him. Blessington nervously says that he cannot answer the first question, but by way of answering the second question, he says that he keeps all his money in a box in his bedroom, as he does not trust bankers. Holmes knows that it must be more than this. He leaves in disgust advising Blessington that he can expect no advice if he tries to deceive him.

Shortly after leaving, Holmes outlines to Watson his train of thought. He knows that two men, perhaps more, are out to get Blessington. The catalepsy was faked, just to keep Doctor Trevelyan busy so that he would not notice the other man going into Blessington’s room. They did not wish to steal anything, as can be seen in their failure to rummage around in the room. They chose an appointment in the evening knowing that there would be no other patients in the waiting room. Holmes also knows just looking at Blessington that he is afraid for his own life, and deduces that he must therefore know who is after him, for no man could have such enemies without knowing about it. Also, it was only by chance that Blessington was not in both times that these two men came; they were obviously not familiar with Blessington's personal habits.

The next morning brings news that Mr. Blessington has hanged himself. Dr. Trevelyan’s brougham is sent to 221B Baker Street to bring Holmes to the scene. When Holmes and Watson arrive, Blessington is still hanging there from a hook in his bedroom ceiling. Inspector Lanner is there. He believes that it is a suicide, but Holmes soon deduces otherwise. The cigar ends and other clues tell him that three other men were there, and for a while. They were let into the premises by a confederate inside, as the door was still barred in the morning. Suspicion falls on the new page, who has vanished.

It seems obvious to Holmes that the men came to “try” Blessington, and reached a verdict of guilty, and a sentence of death, which they then proceeded to carry out.

A little digging at police headquarters brings up the rest of the truth. All four of the men were once members of a criminal gang that robbed banks. Blessington’s real name was Sutton, and the other three, two of whom played the Russians, were Biddle, Hayward, and Moffat. After robbing the Worthington Bank of 7,000 pounds in 1875, Blessington (or Sutton) had turned informer, and as a result, another gang member, Cartwright, had been hanged for murdering the caretaker, and the other three had each been given 15 years in prison. Blessington’s “paranoia” was indeed a very real fear, caused by news of their early release, not by some burglary, as he claimed. The murderers chose hanging as their form of execution to avenge Cartwright.

Eventually, the page turns up, but the case against him falls apart for lack of evidence. As for the other three, they are never heard from again, and it is believed that they perished in the wreck of the Norah Creina off Portugal.

The murderers’ fate in "The Adventure of the Resident Patient" mirrors what happened to Mr. Openshaw’s killers in "The Five Orange Pips." They, too, perished in a shipwreck.

The story is set in October 1881, the year that Holmes and Watson met and moved into Baker Street, according to the original text (see below).

Most American editions of the Sherlock Holmes stories contain a bastardized edition of the text in which the first few pages of this episode and "The Adventure of the Cardboard Box" are almost identical; both contain the same, rather impressive example of Holmes's deductive powers. The reason for this stems from the original American publication of The Memoirs of Sherlock Holmes in which the story of "The Cardboard Box" was eliminated; but its opening scene was retained and transferred to "The Resident Patient". Even today, this change continues to be propagated and editions of the stories which contain the original, correct text of "Resident Patient" are comparatively few.

In the 1985 television adaptation starring Jeremy Brett, the episode presents Watson attempting to apply Holmes' methods to uncover his friend's current state but largely failing, although Holmes does admit that "there is an element of truth in what you say". This scene is very much in the manner of the Doyle penned parody How Watson Learned the Trick, which also features Watson making incorrect conclusions about Holmes.

Works related to The Adventure of the Resident Patient at Wikisource