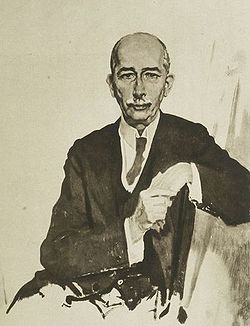 Edward Mandell House (July 26, 1858 – March 28, 1938) was an American diplomat, politician, and presidential advisor. Commonly known by the title of Colonel House, although he had no military experience, he had enormous personal influence with U.S. President Woodrow Wilson as his foreign policy advisor until Wilson removed him in 1919.

House (originally "Huis" which became "House") was born in Houston, Texas. He was the son of Houston mayor Thomas William House, Sr.. House was educated in New England prep schools and went on to study at Cornell University in Ithaca, New York, in 1877, but he was forced to drop out when his father died. He married Loulie Hunter on 4 August 1881. On his return to Texas, House ran his family's business. He eventually sold the cotton plantations, and invested in banking. House moved to New York City about 1902.

In 1912, House published anonymously a novel called Philip Dru: Administrator, in which the title character, Dru, leads the democratic western U.S. in a civil war against the plutocratic East, becoming the dictator of America. Dru as dictator imposes a series of reforms which resemble the Bull Moose platform of 1912 and then vanishes. [Lash pp 230-35]

He became active in Texas politics and served as an advisor to President Woodrow Wilson, particularly in the area of foreign affairs. House functioned as Wilson's chief negotiator in Europe during the negotiations for peace (1917-1919), and as chief deputy for Wilson at the Paris Peace Conference.

House became a close friend and supporter of New Jersey governor Woodrow Wilson in 1911, and helped him win the Democratic presidential nomination in 1912. He became an intimate of Wilson and helped set up his administration. House was offered the cabinet position of his choice (except for Secretary of State which was already pledged to William Jennings Bryan) but declined, choosing instead "to serve wherever and whenever possible." House was even provided living quarters within the White House. After Wilson's first wife died in 1914, the President was even closer to House. However, Wilson's second wife, Edith, of whom he had commissioned the Swiss-born American artist Adolfo Müller-Ury (1862-1947) to paint a portrait in 1916, disliked House, and his position weakened. House threw himself into world affairs, promoting Wilson's goal of brokering a peace to end World War I. He spent much of 1915 and 1916 in Europe, trying to negotiate peace through diplomacy. He was enthusiastic but lacked deep insight into European affairs and was misled by British diplomats. After the sinking of the Lusitania on 7 May 1915, tension escalated with Germany and U.S. neutrality was precarious. House decided the war was an epic battle between democracy and autocracy; he argued the United States ought to help Britain and France win a limited Allied victory. However, Wilson still insisted on neutrality. 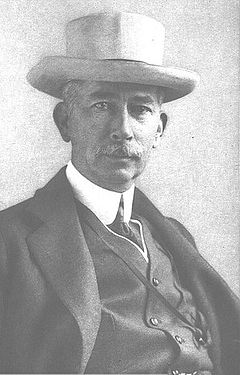 House played a major role in shaping wartime diplomacy. Wilson had House assemble "The Inquiry"—a team of academic experts to devise efficient postwar solutions to all the world's problems. In September 1918, Wilson gave House the responsibility for preparing a constitution for a League of Nations. In October 1918, when Germany petitioned for peace based on the Fourteen Points, Wilson charged House with working out details of an armistice with the Allies.

House helped Wilson outline his Fourteen Points, and worked with the president on the drafting of the Treaty of Versailles and the Covenant of the League of Nations. House served on the League of Nations Commission on Mandates with Lord Milner and Lord Robert Cecil of Great Britain, M. Simon of France, Viscount Chinda of Japan, Guglielmo Marconi for Italy, and George Louis Beer as adviser. On May 30, 1919 House participated in a meeting in Paris, which laid the groundwork for establishment of the Council on Foreign Relations (CFR). Throughout 1919, House urged Wilson to work with Senator Henry Cabot Lodge to achieve ratification of the Versailles Treaty.

However, the conference revealed serious policy disagreements between Wilson and House. Even worse were personality conflicts. Wilson had become much more intolerant and systematically broke with one after another of his closest advisors. When Wilson returned home in February 1919, House took his place on the Council of Ten where he negotiated compromises unacceptable to Wilson. In mid-March 1919, Wilson returned to Paris and lost confidence in House, relegating him to the sidelines.

In the 1920s, House strongly supported U.S. membership in the League of Nations and the World Court, the Permanent Court of International Justice.

In 1932, House supported Franklin D. Roosevelt without joining the inner circle. Although he became disillusioned with the New Deal, he did not express his reservations in public.