Comparison of MD and DO in the United States

Comparison of MD and DO in the United States

This is a comparison of DOs and MDs in the United States, discussing the similarities and differences between Doctors of Osteopathic Medicine (DOs) and Doctors of Medicine (MDs).

Holders of a DO are known as osteopathic physicians,[1] while holders of an MD are sometimes referred to as allopathic physicians.[2] There is disagreement on the extent of the difference between osteopathic and conventional medicine.[3][4] According to the Cecil Textbook of Medicine, 22 ed., other than teaching manual medicine, medical training for an osteopathic degree (DO) is now virtually indistinguishable from that which leads to the MD degree. Osteopathic physicians complete conventional residencies in hospitals and training programs; are licensed in all states; and have rights and responsibilities, such as military service, that are identical to MD qualified physicians and surgeons.[5]

There is a history of territorialism between the MD and DO qualified physicians' worlds, though animosity between the groups has subsided in recent years. In 2005, Jordan Cohen, the president of the Association of American Medical Colleges wrote,

The sex and racial distribution of DOs and MDs are similar.[7] There are significantly more MDs than DOs.[8] In 2010, 5,428 students matriculated[9] into osteopathic medical programs and 18,665 students matriculated as first-year students into MD programs, a ratio of 1:3.4 respectively.[10]

Some authors describe less quantifiable distinctions between the two. Avery Hurt writes, "In actual practice, the variations between the two types of physicians are often so slight as to be unnoticeable to patients, and a day in the life of each can appear indistinguishable. But the differences are there, subtle but deep."[12] Several studies have investigated these differences. One compared the patient interactions of DOs and MDs. The study found that "osteopathic physicians were more likely to use patient's first names and to discuss the social, family and emotional impact of illnesses." For example, "66% of DOs discussed a patient's emotional state compared with about one-third of MDs." The same study found that MD qualified "physicians scored higher in discussing literature or scientific basis of treatment." Although this doesn't take into account that most Osteopath Physicians are primary care providers, and have not specialized.[13] Another study analyzed 341.4 million patient visits to general and family medicine specialists in the United States, including 64.9 million visits to osteopathic physicians and 276.5 million visits to MDs. It found that there was no significant difference between DOs and MDs "with regard to time spent with patients and preventive medicine services."[14]

A Harvard study found significant differences in the attitudes of DOs and MDs. The study found that 40.1% of MD students and physicians described themselves as "socioemotionally" oriented over "technoscientific" orientation. 63.8% of their osteopathic counterparts self-identified as socioemotional. (p < .0001)[15]

One study of osteopathic physicians attempted to investigate their perceptions of differences in philosophy and practice between themselves and their MD counterparts. 88% of the respondents had a self-identification as osteopathic physicians, but less than half felt their patients identified them as such. The study asked respondents to identify points of philosophical and practical difference between DOs and MDs; no more than 1/3 of respondents could agree on any single such point of difference.[16]

As the training of DOs and MDs becomes less distinct, some have expressed concern that their unique characteristics will be lost.[17] Others welcome the rapprochement and already consider modern medicine to be the type of medicine practiced by both "MD and DO type doctors."[18] One persistent difference is the respective acceptance of the terms "allopathic" and "osteopathic." Osteopathic medical organizations and medical schools all include the word osteopathic in their names, and such groups actively promote an "osteopathic approach" to medicine. While "osteopathy" is a term used by its founder AT Still to describe his new philosophy of medicine, "allopathic medicine" was an originally derogatory term coined by Samuel Hahnemann to contrast the conventional medicine of his day with his alternative system of homeopathic medicine. 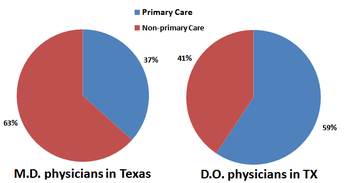 MDs and DOs in Texas by practice type.[19]

The Liaison Committee on Graduate Medical Education (LCME) accredits the 135 US-medical schools[20] that award the MD, while the American Osteopathic Association (AOA) Commission on Osteopathic College Accreditation (COCA) accredits the 26 colleges of osteopathic medicine in 34 locations in the United States that award the DO degree.[21] There are only two US universities that have accredited programs that give both MD and DO qualifications: Michigan State University, and the University of Medicine and Dentistry of New Jersey.

Many authors note the most obvious difference between the curricula of DO and MD schools, Osteopathic Manipulative Medicine (OMM), a type of manual therapy taught at only osteopathic schools. The NIH's National Center for Complementary and Alternative Medicine states[22] that overall, studies have shown that spinal manipulation can provide mild-to-moderate relief from low-back pain and appears to be as effective as conventional medical treatments. In 2007 guidelines, the American College of Physicians and the American Pain Society include spinal manipulation as one of several treatment options for practitioners to consider using when pain does not improve with self-care.[23][24] Spinal manipulation is generally a safe treatment for low-back pain. Serious complications are very rare.[25] A 2001 survey of osteopathic physicians found that more than 50% of the respondents used OMT (osteopathic manipulative treatment) on less than 5% of their patients. The survey was the latest indication that osteopathic physicians have become more like MD qualified physicians in all respects: fewer perform OMT, more prescribe drugs, and many perform surgery as a first option.[26] One area which has been implicated, but not been formally studied regarding the decline in OMT usage among DOs in practice, is the role of reimbursement changes.[27] Only in the last several years could a DO charge for both an office visit (Evaluation & Management services) and use a procedure (CPT) code when performing OMT; previously, it was bundled.[28]

Further information: Status of OMM within the Osteopathic profession

Some authors note the differences in average GPA and MCAT scores of those who matriculate at DO schools versus those who matriculate at MD schools within the United States. In 2010, the average MCAT and GPA for students entering US-based MD programs were 31.1 [29] and 3.67,[30], respectively, and 26.49 and 3.47 for DO matriculants.[31] As many as one out of every three students matriculating at an osteopathic medical school has been rejected by MD programs,[32]however, osteopathic medical schools are more likely to accept non-traditional students,[33][34] who are older, coming to medicine as a second career, non-science majors, etc. Osteopathic medical students are required to take Comprehensive Osteopathic Medical Licensure Examination (COMLEX-USA) that is sponsored by the National Board of Osteopathic Medical Examiners (NBOME). This exam is a prerequisite for DO-associated residency programs, which are available in almost every specialty of medicine and surgery. American osteopathic physicians (DO) may also choose to sit for the USMLE [35]if they wish to take an allopathic residency; however, if they have taken COMLEX, it may or may not be needed, depending on the individual institution’s program requirements.[36][37][38] First-time USMLE pass rates for DO vs. MD students are as follows: Step 1: 80% and 92% and Step 2: 90% and 96%, respectively; however, DO graduates have a higher pass rate than their MD counterparts for Step 3: 96% vs. 93%, respectively.[39] Given that DO graduates have performed competitively with their US trained MD counterparts, the trend is now overwhelmingly towards acceptance of COMLEX.[40][41][42]

Graduates of both osteopathic and MD certified medical schools are eligible to apply to residency programs through the National Resident Matching Program (NRMP). In 2003, 99% of new US MDs and 43% of new US DO's went on to train in ACGME-accredited residency programs.[17]

The American Osteopathic Association accredits osteopathic residency programs. There have been calls to end the remaining barriers between the two types of programs.[44][45][46] Since 1985, a single residency training program can be dual-accredited by both the ACGME and the AOA.[17][47][48]

In 2001, the AOA adopted a provision making it possible for a resident (who is a DO) in any MD program to apply for osteopathic approval of their training.[49] The topic of dual-accreditation is controversial. Opponents claim that by merging osteopathic students into the "MD world", the unique quality of osteopathic philosophy will be lost.[17] Supporters claim the programs are popular because of the higher prestige and higher resident reimbursement salaries associated with MD programs.[50] MDs are generally not permitted to train in osteopathic (AOA-accredited) residencies, though this has become a subject of debate within the osteopathic profession. The American Osteopathic Association has agreed to study the issue of permitting MDs to train in DO (AOA-accredited) residencies.[51][52]

There are notable differences in the specialty choices of DOs and MDs. One study attributes this to a difference in the 'cultures' of their medical schools. "In comparison with allopathic schools [MD], the cultural practices and educational structures in osteopathic medical schools better support the production of primary care physicians."[53] According to one survey, 54.6% of deans of conventional medical schools reported that training future primary care physicians was more important to their institutions than training future specialist physicians, compared with 100% of osteopathic medical school deans. (F = 893.11,95, p < .0001).[53]

To maintain a license to practice medicine, US physicians are required to complete additional training every few years, so called continuing medical education (CME). There are subtle differences in the CME requirements for MD and DO qualified physicians, and in how these CME credits are approved. The requirements for maintaining a physician license for MD or DO qualified physicians are almost identical in most states, though there are small differences. For example, in the case of Pennsylvania, MD licenses begin on December 31, whereas DO ones begin on October 31.[54]

MD qualification training is the most widely available in the US; however, the osteopathic medical profession has rapidly expanded, with 1 in 5 medical students now entering an osteopathic medical school.[55] Both DOs and MDs have the option to train and practice in any of the medical specialties and sub-specialties. Both degrees are recognized internationally as a medical degree. Accredited osteopathic and allopathic medical schools are both included in the World Health Organization’s World Directory of Medical Schools.[56] When practicing overseas, an MD degree may be easier to negotiate than a DO degree, DOs are more likely than their US MD counterparts to have to explain or defend their training, particularly in areas that have osteopaths already. This is rapidly changing as over 55 countries now recognize the osteopathic medical degree, and the American Osteopathic Association’s Bureau on Osteopathic Medical Education & Affairs is actively working with members to expand that number. [57]

In the United States, ACGME-accredited residency training programs have been generally considered more prestigious and offered higher reimbursement salaries, as they tend to be at large academic medical centers.[58] In order to attract the best residents, more ACGME programs are becoming dually AOA/ACGME accredited.[59] The majority (56%) of US osteopathic medical students attend AOA or AOA/ACGME dually-accredited residency programs.[60] The most common reason (76%) given by osteopathic medical students choosing an ACGME residency or AOA/ACGME dually-accredited program was a more suitable geographic location.[61] MD graduates may not apply for osteopathic graduate medical education training programs at this time.[62]