Dendrimers are repetitively branched molecules. [1] [2] The name comes from the Greek word "δένδρον" (pronounced dendron), which translates to "tree". Synonymous terms for dendrimer include arborols and cascade molecules. However, dendrimer is currently the internationally accepted term. A dendrimer is typically symmetric around the core, and often adopts a spherical three-dimensional morphology. The word dendron is also encountered frequently. A dendron usually contains a single chemically addressable group called the focal point. The difference between dendrons and dendrimers is illustrated in figure one, but the terms are typically encountered interchangeably.[3] 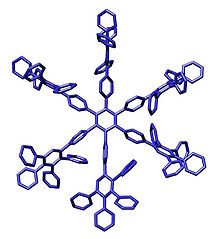 Dendritic molecules are characterized by structural perfection. Dendrimers and dendrons are monodisperse and usually highly symmetric, spherical compounds. The field of dendritic molecules can be roughly divided into low-molecular weight and high-molecular weight species. The first category includes dendrimers and dendrons, and the latter includes dendronized polymers, hyperbranched polymers, and the polymer brush.

Dendrimers are also classified by generation, which refers to the number of repeated branching cycles that are performed during its synthesis. For example if a dendrimer is made by convergent synthesis (see below), and the branching reactions are performed onto the core molecule three times, the resulting dendrimer is considered a third generation dendrimer. Each successive generation results in a dendrimer roughly twice the molecular weight of the previous generation. Higher generation dendrimers also have more exposed functional groups on the surface, which can later be used to customize the dendrimer for a given application.[19]

One of the very first dendrimers, the Newkome dendrimer, was synthesized in 1985. This macromolecule is also commonly known by the name arborol. Figure 3 outlines the mechanism of the first two generations of aborol through a divergent route (discussed below). The synthesis is started by nucleophilic substitution of 1-bromopentane by triethyl sodiomethanetricarboxylate in dimethylformamide and benzene. The ester groups were then reduced by lithium aluminium hydride to a triol in a deprotection step. Activation of the chain ends was achieved by converting the alcohol groups to tosylate groups with tosyl chloride and pyridine. The tosyl group then served as leaving groups in another reaction with the tricarboxylate, forming generation two. Further repetition of the two steps leads to higher generations of arborol.[11]

Poly(amidoamine), or PAMAM, is perhaps the most well known dendrimer. The core of PAMAM is a diamine (commonly ethylenediamine), which is reacted with methyl acrylate, and then another ethylenediamine to make the generation-0 (G-0) PAMAM. Successive reactions create higher generations, which tend to have different properties. Lower generations can be thought of as flexible molecules with no appreciable inner regions, while medium sized (G-3 or G-4) do have internal space that is essentially separated from the outer shell of the dendrimer. Very large (G-7 and greater) dendrimers can be thought of more like solid particles with very dense surfaces due to the structure of their outer shell. The functional group on the surface of PAMAM dendrimers is ideal for click chemistry, which gives rise to many potential applications.[20]

Dendrimers can be considered to have three major portions: a core, an inner shell, and an outer shell. Ideally, a dendrimer can be synthesized to have different functionality in each of these portions to control properties such as solubility, thermal stability, and attachment of compounds for particular applications. Synthetic processes can also precisely control the size and number of branches on the dendrimer. There are two defined methods of dendrimer synthesis, divergent synthesis and convergent synthesis. However, because the actual reactions consist of many steps needed to protect the active site, it is difficult to synthesize dendrimers using either method. This makes dendrimers hard to make and very expensive to purchase. At this time, there are only a few companies that sell dendrimers; Polymer Factory Sweden AB[21] commercializes biocompatible bis-MPA dendrimers and Dendritech[22] is the only kilogram-scale producers of PAMAM dendrimers. Dendritic Nanotechnologies Inc.,[23] from Mount Pleasant, Michigan, USA produces PAMAM dendrimers and other proprietary dendrimers.

The dendrimer is assembled from a multifunctional core, which is extended outward by a series of reactions, commonly a Michael reaction. Each step of the reaction must be driven to full completion to prevent mistakes in the dendrimer, which can cause trailing generations (some branches are shorter than the others). Such impurities can impact the functionality and symmetry of the dendrimer, but are extremely difficult to purify out because the relative size difference between perfect and imperfect dendrimers is very small.[19]

Dendrimers are built from small molecules that end up at the surface of the sphere, and reactions proceed inward building inward and are eventually attached to a core. This method makes it much easier to remove impurities and shorter branches along the way, so that the final dendrimer is more monodisperse. However dendrimers made this way are not as large as those made by divergent methods because crowding due to steric effects along the core is limiting.[19]

Dendrimers have been prepared via click chemistry, employing Diels-Alder reactions,[24] thiol-ene reactions [25] and azide-alkyne reactions.[26][27][28] An example is the synthesis of certain polyphenylene dendrimers can be seen in figure 6.[29]

There are ample avenues that can be opened by exploring this chemistry in dendrimer synthesis.

Applications of dendrimers typically involve conjugating other chemical species to the dendrimer surface that can function as detecting agents (such as a dye molecule), affinity ligands, targeting components, radioligands, imaging agents, or pharmaceutically active compounds. Dendrimers have very strong potential for these applications because their structure can lead to multivalent systems. In other words, one dendrimer molecule has hundreds of possible sites to couple to an active species. Researchers aimed to utilize the hydrophobic environments of the dendritic media to conduct photochemical reactions that generate the products that are synthetically challenged. Carboxylic acid and phenol terminated water soluble dendrimers were synthesized to establish their utility in drug delivery as well as conducting chemical reactions in their interiors.[30] This might allow researchers to attach both targeting molecules and drug molecules to the same dendrimer, which could reduce negative side effects of medications on healthy cells.[20]

Dendrimers can also be used as a solubilizing agent. Since their introduction in the mid-1980s, this novel class of dendrimer architecture has been a prime candidate for hosts guest chemistry.[31] Dendrimers with hydrophobic core and hydrophilic periphery have shown to exhibit micelle-like behavior and have container properties in solution.[32] The use of dendrimers as unimolecular micelles was proposed by Newkome in 1985.[33] This analogy highlighted the utility of dendrimers as solubilizing agents. [34] The majority of drugs available in pharmaceutical industry are hydrophobic in nature and this property in particular creates major formulation problems. This drawback of drugs can be ameliorated by dendrimeric scaffolding, which can be used to encapsulate as well as to solubilize the drugs because of the capability of such scaffolds to participate in extensive hydrogen bonding with water.[35][36][37][38][39][40] Dendrimer labs throughout the planet are persistently trying to manipulate dendrimer’s solubilizing trait, in their way to explore dendrimer as drug delivery [41][42] and target specific carrier.[43][44][45] 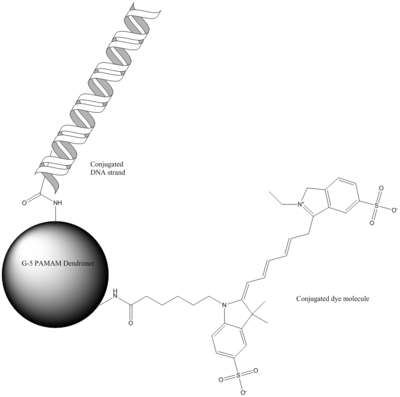 Figure 7: Schematic of a G-5 PAMAM dendrimer conjugated to both a dye molecule and a strand of DNA.

Approaches for delivering unaltered natural products using polymeric carriers is of widespread interest, dendrimers have been explored for the encapsulation of hydrophobic compounds and for the delivery of anticancer drugs. The physical characteristics of dendrimers, including their monodispersity, water solubility, encapsulation ability, and large number of functionalizable peripheral groups, make these macromolecules appropriate candidates for evaluation as drug delivery vehicles. There are three methods for using dendrimers in drug delivery: first, the drug is covalently attached to the periphery of the dendrimer to form dendrimer prodrugs, second the drug is coordinated to the outer functional groups via ionic interactions, or third the dendrimer acts as a unimolecular micelle by encapsulating a pharmaceutical through the formation of a dendrimer-drug supramolecular assembly.[46][47] The use of dendrimers as drug carriers by encapsulating hydrophobic drugs is a potential method for delivering highly active pharmaceutical compounds that may not be in clinical use due to their limited water solubility and resulting suboptimal pharmacokinetics. Dendrimers have been widely explored for controlled delivery of antiretroviral bioactives [48] The inherent antiretroviral activity of dendrimers enhances their efficacy as carriers for antiretroviral drugs [49][50] The dendrimer enhances both the uptake and retention of compounds within cancer cells, a finding that was not anticipated at the onset of studies. The encapsulation increases with dendrimer generation and this method may be useful to entrap drugs with a relatively high therapeutic dose. Studies based on this dendritic polymer also open up new avenues of research into the further development of drug-dendrimer complexes specific for a cancer and/or targeted organ system. These encouraging results provide further impetus to design, synthesize, and evaluate dendritic polymers for use in basic drug delivery studies and eventually in the clinic.[46][51]

The ability to deliver pieces of DNA to the required parts of a cell includes many challenges. Current research is being performed to find ways to use dendrimers to traffic genes into cells without damaging or deactivating the DNA. To maintain the activity of DNA during dehydration, the dendrimer/DNA complexes were encapsulated in a water soluble polymer, and then deposited on or sandwiched in functional polymer films with a fast degradation rate to mediate gene transfection. Based on this method, PAMAM dendrimer/DNA complexes were used to encapsulate functional biodegradable polymer films for substratemediated gene delivery. Research has shown that the fast degrading functional polymer has great potential for localized transfection.[52][53][54]

Scientists have also studied dendrimers for use in sensor technologies. Studied systems include proton or pH sensors using poly(propylene imine),[55] cadmium-sulfide/polypropylenimine tetrahexacontaamine dendrimer composites to detect fluorescence signal quenching,[56] and poly(propylenamine) first and second generation dendrimers for metal cation photodetection[57] amongst others. Research in this field is vast and ongoing due to the potential for multiple detection and binding sites in dendritic structures.