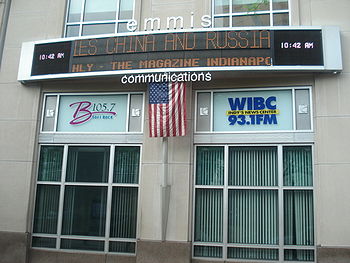 Indianapolis, Indiana is served by local media, as well as regional and national media. As of 2009, Indianapolis is ranked as the 25th largest media market, with over 1.1 million homes.[1]

Radio and Television broadcasts are governed by the FCC.[2]

The Indianapolis Star has the most subscriptions for a daily newspaper in the city. It is owned by Gannett, which also publishes a weekly newspaper called The Topics that focuses on local and community-related news for northern Indianapolis and the surrounding suburbs.

The Indianapolis Recorder is a weekly publication which serves the African-American community. La Voz De Indiana is a bilingual newspaper focused on Latin-American issues.

The Indianapolis Business Journal and Inside Indiana Business are business news publications for the greater Indianapolis region.

Indianapolis is served by the following local broadcast Television stations:

The Bob & Tom Show, syndicated across much of the United States, airs from Indianapolis.