Ferndale is a city in Humboldt County, California, United States. Known for its well-preserved Victorian buildings, the city's population was 1,371 at the 2010 census, down from 1,382 at the 2000 census. It is very near the Lost Coast and towering Coast Redwoods.

Ferndale is known for well-preserved Victorian buildings, which are also known as "Butterfat Palaces" due to their construction during an epoch wherein considerable wealth was generated in the dairy industry, especially during the 1880s. The entire town is an historical landmark (see California Historical Landmark No. 883).[3]

Each May Ferndale is been the finish line of the annual Kinetic sculpture race The first ever race began in Ferndale when Hobart Brown was challenged to race his odd-looking five-wheeled bike down Main Street on Mother's Day, 1969 by local sculptor Jack Mays.

Every February since 1997, Ferndale has hosted 'The Ferndale Fray,' a slot car race with the highest attendance of this type of event anywhere in the world. More than 100 racers on sixteen teams arrive to compete on eight-custom built tables.[4][5]

The Humboldt County Fair is held every August at the county fairgrounds on the edge of Ferndale, and feature the only horse-racing events in the county along with the standard fare of agricultural, pastoral and artistic contests, carnival games, carnival amusement rides, and commercial or non-profit booths.

In early December each year since 1934, local volunteer fire fighters climb and light an approximately 150 foot spruce, one of America's tallest living Christmas trees, during a celebration of song held at the Fireman's Park.[6]

Ferndale is a popular film location and is featured in movies like The Majestic with Jim Carrey, Outbreak starring Dustin Hoffman, Salem’s Lot starring David Soul and James Mason. It was also used as a location twice by the Star Trek franchise, once in Star Trek: The Next Generation and once in Star Trek: Deep Space Nine.

Seth Lewis Shaw built the now-historic Shaw House on his property in 1854. The first post office at Ferndale opened in 1860.[7] Ferndale was incorporated in 1893.[7]

Ferndale's climate is moderated by being close the Pacific Ocean and in the lee of the Wildcat Hills. Winter temperatures rarely go below freezing and summer days are rarely over 80 °F (27 °C). Ferndale receives most of its nearly 50 inches (130 cm) of rain from November to May, with lesser amounts in the summer months. Local microclimates are varied and support tropical palm trees[8] and Sitka spruce,[9] including a mature Sitka forest in Russ Park,[10][11] and the over 150 feet (46 m) tall spruce lighted every year for Christmas.[12] Morning fogs are common year round.

On January 9, 2010 Eureka Earthquake a Richter magnitude 6.5 earthquake occurred about 25 miles offshore of Ferndale. Occurring within a subduction fault associated with the interaction of three tectonic plates (Pacific, North American, and Juan de Fuca), it was the largest local earthquake since the 1992 Cape Mendocino Earthquakes, a series of magnitude 7.2, 6.5, and 6.7 earthquakes which occurred over an 18 hour period, severely damaging some buildings.[15]

There were 611 households out of which 25.7% had children under the age of 18 living with them, 53.0% were married couples living together, 9.3% had a female householder with no husband present, and 35.8% were non-families. 30.1% of all households were made up of individuals and 14.9% had someone living alone who was 65 years of age or older. The average household size was 2.26 and the average family size was 2.83.

Ferndale was incorporated in 1893 and is governed by a four-member City Council and a Mayor, all of whom serve four-year terms chosen in the general election of even-numbered years. The current Mayor is Jeff Farley, elected in November 2006. Councilmembers include Niels Lorenzen, Michael Moreland, Ken Mierzwa and Stuart Titus.

In 2004 the City Council placed Measure O on the municipal ballot to eliminate the elective office of Mayor, which would have then reverted to an appointive office, to be filled by a person chosen by the City Council from amongst its own members. The measure was resoundingly defeated, with 78.8% voting against. Interestingly, when the Mayor's seat was open for election in 2006, all of the mayoral candidates were write-ins. Jeff Farley won the election, and now holds office as Mayor for the second time in Ferndale history.

Ferndale is home to the longest living newspaper under a single name in Humboldt County, the Ferndale Enterprise.[19] Commercial radio station KHUM operates in a joint studio with KSLG-FM and KWPT under the ownership of Lost Coast Communications. Ferndale is also home to the North Coast's oldest theatre company, The Ferndale Repertory Theatre which has been in operation since 1972.[20]

Several buildings and two Historic Districts in and around Ferndale are listed on the National Register of Historic Places.

The 1891 Eastlake-Stick Style Russ-Williams Bank Building (currently the Victorian Inn), corner of Ocean and Main, was designed by noted architect J. Frost, with a millinery store, a haberdashery and the Ferndale Enterprise newspaper on the ground floor, as well as business and professional offices on the upper floors. 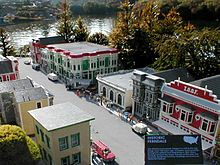 Some of Ferndale's historic buildings at Legoland, California. Left to right top: Abraxas Building, Victorian Inn, NVB Bank Building, Hobart Galleries, and the IOOF hall. The order of the buildings is not the same in reality.

Many of Ferndale's buildings have been recreated at the Legoland California theme park - the only American small town represented alongside New York, San Francisco, Las Vegas and other nationally known locations. Ferndale was settled by many Danes, and Lego is a Danish company. In 1995, Legoland staff took hundreds of photos in Ferndale, and used over 1 million Lego bricks to recreate the town in the Miniland section of the park.[21]

Ferndale's first sewage treatment facility and combined sewer system was built in 1953 and upgraded in 1973, 1994 and 2001.[22] Improvements were made to the sewers in 1989 under a $400,000 project funded by the California State Water Resources Control Board to improve the collection system and reduce inflow and infiltration.[22] El Niño storms in April 1998 caused Williams Creek to change course due to debris blockage.[23] This creek had been the major tributary of the Salt River near the treatment plant, so diversion lowered the volume of water available and caused the dilution ratios at the plant to exceed permitted levels.[23] Record stormwater flows damaged the plant and the city applied for assistance[23] under the FEMA-1203-DR-CA El Niño storm Presidential disaster declaration.[24] On 15 May 2003, the Regional Water Board (RWB) placed a Cease and Desist order on Ferndale due to discharges of treated wastewater which exceeded 1 percent of the flow of Francis Creek / Salt River stream system.[25] The City paid a $48,000 penalty to the RWB and agreed to complete an environmental project instead of paying $78,000 more in penalties to the RWB[25] and began replacing the old plant in 2009.[25]

The new plant was completed in 2011 and provides tertiary wastewater treatment for nearly 1,500 commercial and residential users.[25] The only other wastewater facility like Ferndale's in California is in Colfax.[26]