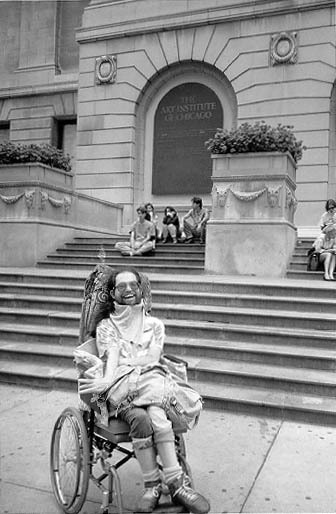 Frank Moore (born Frank James Moore, , ) is an American , , , painter, and /television personality who has experimented in art, performance, and ritual since the late 1960s. He is an independent candidate for in the 2008 election.

Moore is perhaps most well known as one of the NEA-funded artists targeted by and the GAO (Government Accountability Office) in the early '90s for doing art that was labeled “obscene.” He is well known for long (5-48 hours) ritualistic performances with audience participation, nudity, and eroticism. But he has also become well known for his influential writings on performance, art, life, and cultural subversion; for his historical influence on the San Francisco Bay Area music and performance scene; and more recently for his 24/7/365 webstation, [http://www.luver.com LUVeR] (Love Underground Visionary Revolution).

He was born with and is unable to walk or talk, but has written books; has directed plays; has directed, acted in, and edited films; regularly gives poetry readings; plays piano; sings in ensemble music jams; and continues to lead bands in hardcore punk clubs up and down the west coast. He also has a large collection of original oil paintings that have been shown across the and in . Moore communicates using a laser-pointer and a board of letters, numbers, and commonly used words.

Performance artist considers Moore one of her teachers, [cite news
title = Sprinkle, A. "Post-porn modernist: my 25 years as a multimedia whore". Cleis Press, 1998. ISBN 1-57344-039-6] and Moore has performed with a host of performance and punk figures of the underground since the 1970s, including Barbara Smith, Linda Sibio, , and .

Frank Moore first came to be known in the 1970s as the creator of the popular show, the Outrageous Beauty Revue ( [http://www.eroplay.com/intimatetheater/intimate.html "The Intimate Theater".)] . In 1992 he was voted Best Performance Artist by the . In the early '90s he was targeted by Senator . From 1991-1999 Frank Moore published and edited the acclaimed underground zine, [http://www.eroplay.com/contents.html The Cherotic r(E)volutionary.]

In addition to his book, [http://www.eroplay.com/Cave/Writings/expandingsex.htm Cherotic Magic] and numerous other self-published pieces, Frank Moore has been widely published in various art and other periodicals.

Frank Moore's "Web of All Possibilities" at [http://www.eroplay.com eroplay.com] features his and other artists' audio, video, and visual artwork. He founded [http://www.luver.com Love Underground Visionary Revolution] (LUVeR) in 1999.

In 2006, Moore announced his candidacy for the 2008 election for President of the United States. His running mate is Dr. .