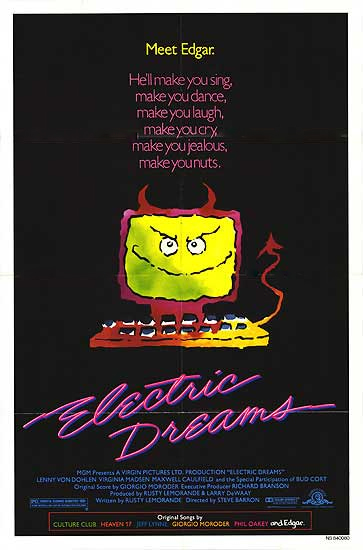 "Electric Dreams" is a 1984 movie set in , that depicts a between a man, a woman, and a . It stars , and (voice) and was directed by . It was the first film released by the Virgin Films production company.

The soundtrack features music from prominent popular musicians of the time, being among the movies of this generation that actively explored the commercial link between a movie and its . The soundtrack album "Electric Dreams" was re-issued on CD in 1998.

The recording of this movie is rare. It was released in 1984 and again in 1991, but has not been manufactured since the mid-1990s. Warner Bros released a version for the market in 2001, but this too has proved difficult to get hold of.
, the movie has never been released on .

The story opens with Miles Harding, an who envisions a shaped like a piece that could withstand s. Seeking a way to get organized, he buys a home computer (made by the fictitious company Pinecone Computers) to help him develop his ideas. Although he is initially unsure that he will even be able to correctly operate the computer, he later buys numerous extra gadgets that were not necessary for his work, such as switches to control household appliances like the blender, a speech synthesizer, and a microphone. The computer addresses Miles as "Moles", because Miles mistyped his name during the initial set-up.

When Miles attempts to download data from a computer at work, the computer begins to overheat. In a state of panic, Miles pours a nearby bottle of champagne over the machine, but instead of destroying it, this has the effect of bringing the computer to life.

The remainder of the movie deals with a between Miles, his computer (which identifies its own name as "Edgar" at the end of the movie), and Miles' neighbor, an attractive cellist named Madeline (). Edgar increasingly invades Miles' affairs leading to several invasions into his life away from the house.

Eventually, Edgar accepts Madeline and Miles' love for each other, and appears to commit by sending a large through its , around the world, and back to itself. It is revealed in the final scene that Edgar has transferred himself away from his computer "body" into electronic systems in the world.

The film received a somewhat mixed critical reception, with some critics praising it for its overtly MTV influenced style and others criticising it for the same reason. Popular American TV critics Gene Siskel and Roger Ebert gave the film two thumbs up on their TV show 'At the Movies'.