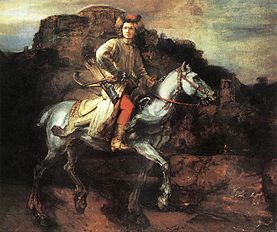 It has been proposed that Marcjan Aleksander Ogiński may be the subject of The Polish Rider (c. 1655), by Rembrandt Harmenszoon van Rijn

He initiated the establishment of Dominicans in the Peninsula Castle of Trakai, which was approved in 1678. Since 1681, Ogiński was the owner of Vepriai and Deltuva (present day Lithuania), which were received from his sister Barbara.

Marcjan Aleksander Ogiński may be the subject of a much debated work, Rembrandt's The Polish Rider. The image was painted at the time he was studying in the Netherlands. It has been suggested that Ogiński had the portrait painted on the eve of his return to his military unit during the devastating Swedish invasions in the Deluge.[1]