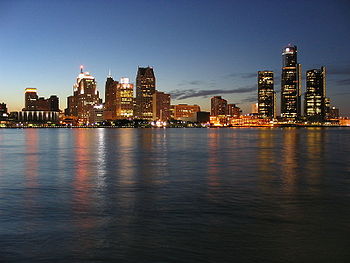 Skyline of Detroit. The Renaissance Center is visible to the right.

The Detroit International Riverfront is an area of Detroit, Michigan that borders the Detroit River. The International Riverfront area extends from the Ambassador Bridge in the west to Belle Isle in the east, extending a total of 5½-miles (8.8 kilometers) and encompassing a multitude of parks, restaurants, retail shops, skyscrapers, and high rise residential areas along with Cobo Convention/Exhibition Center and Joe Louis Arena. The Marriott at the Renaissance Center and the Robert's Riverwalk Hotel are also situated along the International Riverfront. Private companies and foundations together with the city, state, and federal government have contributed several hundred million dollars toward the riverfront development. Key public spaces in the International Riverfront, such as the RiverWalk, Dequindre Cut Greenway and Trail, William G. Milliken State Park and Harbor, and a cruise ship passenger terminal and dock at Hart Plaza complement the architecture of the area.[1] The area provides a venue for a variety of annual events and festivals including the North American International Auto Show, River Days, Detroit Free Press International Marathon, Movement Electronic Music Festival and the Detroit International Jazz Festival, Motor City Pride, among others.

Skyline along the Detroit International Riverfront

The Detroit Riverfront Conservancy incorporated as a 501(c)(3) organization helped raise funds for the International Riverfront project.[1] Developers planned the initial east riverfront promenade investment at $559 million, which included contributions of $135 million from GM and $50 million from the Kresge foundation.[2]

The development marked a step toward the city's potential bid for the 2020 Summer Olympics. Detroit has made the Summer Olympic Games' final bidding election more often than any other ultimately unsuccessful bid city, participating in IOC elections for the 1944 (3rd place, behind bid winner London), 1952 (5th place), 1956 (4th place), 1960 (3rd place), 1964 (2nd place), 1968 (2nd place) and 1972 (4th place) Games. (Los Angeles has made more total bids with nine, but hosted twice) If accepted as the U.S. candidate by USOC, this would be the city's eighth bid.[3] Lowered crime figures improve Detroit's prospects for the USOC competition. Soft-drink manufacturer Faygo has stepped up its efforts as major sponsor. Successful events such as Super Bowl XL have showcased Detroit as a city accustomed to hosting supersized crowds.[4]

The area contains the Detroit River International Wildlife Refuge which is the only international wildlife preserve in North America, uniquely located in the heart of a major metropolitan area. The Refuge includes islands, coastal wetlands, marshes, shoals, and waterfront lands along 48 miles (77 km) of the Detroit River and Western Lake Erie shoreline. 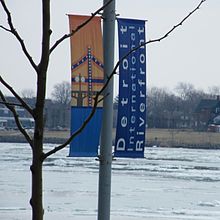 The Detroit International Riverfront includes a 5½-mile (8.8 km) promenade called the River Walk which is to extend from the Ambassador Bridge to Belle Isle. The path is located directly on the river, sometimes bridging it. The path is 62 feet (18¾ m) wide in most places, with separate lanes for pedestrian and wheeled (such as bicycles or inline skate) traffic. Pavilions, fishing piers and benches are located at intervals along the path.[1]

The first 3.5 miles (5.6 km) of continuous riverfront promenade and two of the four planned pavilions opened to the public on June 6, 2007. Rivard Plaza located at the foot of Rivard Street features a covered seating, a carousel, conecessions and bike rentals. Richard Plaza located in Gabriel Richard Park features covered seating, conessions and a butterfly garden. The River Walk is continuous from Joe Louis Arena to Milliken State Park with unfinished sections between the state park and River Place. From River Place the River Walk is then continuous through Mt Elliott Park to the former site of the Uniroyal Tire factory west of Belle Isle. The west riverfront promenade development is not expected to be completed before 2012. The west riverfront includes the high-rise Riverfront Condominiums. The west riverfront promenade will eventually connect to River Rouge in the southwest side.[1]

The Renaissance Center, nicknamed the RenCen, is a group of seven interconnected skyscrapers in Detroit, Michigan, and the tallest building in Michigan since 1977. Located on the Detroit International Riverfront, the entire Renaissance Center complex is owned by General Motors. The central tower is occupied by the Detroit Marriott at the Renaissance Center, the tallest all-hotel skyscaper in the Western Hemisphere with the largest rooftop restaurant, called Coach Insignia. The complex contains many restaurants, a variety of shops, and the vehicle display known as GM World. GM donated its portion of the plaza and promenade to the Riverfront Conservancy upon completion. A cruise-ship passenger terminal stands on Hart Plaza, adjacent to the Renaissance Center. In 2003, General Motors completed a $500 million renovation of the Renaissance Center for its world headquarters which it had purchased in 1996. Skidmore, Owings & Merrill, Gensler, the Smith Group, and Ghafari Associates were among the architects for the renovation. The majority of the construction operations were led by Turner Construction Company. The renovation included the addition of a five-story Wintergarden which provides access to the Detroit International Riverfront. [5]

Work continued in and around the complex until 2005. The Renaissance Center totals 5.5 million square feet (511,000 m²), making it one of the world's largest office complexes.

Hart Plaza and the Dock of Detroit 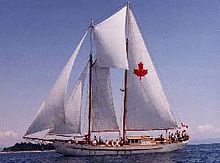 Philip A. Hart Plaza in downtown Detroit, along the Detroit River. It is located more or less on the site at which Antoine de la Mothe Cadillac landed in 1701 when he founded Fort Pontchartrain du Détroit, the settlement that became Detroit. In 2011, the Detroit-Wayne County Port Authority opened its new cruise ship passenger terminal and dock at Hart Plaza, adjacent to the Renaissance Center, which receives major cruise ships such as the MS Columbus.[6]

The 14 acres (5.7 ha) plaza, which is named for the late U.S. Senator Philip Hart, opened in 1975 and has a capacity for about 40,000 people. At the center of the plaza is the Horace E. Dodge and Son Memorial Fountain, designed by Isamu Noguchi and Walter Budd in 1978.

William G. Milliken State Park and Harbor (formerly Tri-Centennial State Park and Harbor) is a state park in Michigan, and the only state park located in an urban area. The park consist of the former city-owned St. Aubin Park and Marina. Located just east of downtown Detroit in the Near-East Riverfront, it covers 31 acres (13 ha) on the Detroit River, and includes a 52-slip harbor of refuge. A 63-foot (19 m) conical brick light tower marks the harbor entrance. The park's first phase opened in 2003, included refurbishing of the marina and construction of lighthouse. Construction on the second phase, adjacent to Rivard Plaza, to expand the park started in summer 2008 and was completed in summer 2009. In fall 2009, the state park was renamed in honor of former Michigan Governor William G. Milliken.

Chene Park is located on the near east side of Detroit at the foot of Chene Street, along the banks of the Detroit River. Located just east of Tri-Centennial State Park and Harbor, it contains a 6,000-seat amphitheater where concerts are regularly scheduled every summer. Jazz, Classic Soul and Rhythm and Blues acts are the staples of the season. The park also includes park trails, the Chene Park Fountain, and the Lake Lounge bar. The Detroit Riverfront Conservancy has connected the park to the Renaissance Center along a riverside promenade.

The historic Stroh River Place complex is a mixed-use residential development adjacent to the Roberts Riverwalk Hotel and Residence, the redeveloped site of the Parke-Davis research laboratory, a National Historic Landmark located along the east riverfront promenade. The historic Dry Dock Complex is an additional redeveloped site along the east riverfront which includes residential units and retail.

Detroit River Days, a five day festival on the International Riverfront, marked the 2007 opening of the riverfront promenade along the east river leading up to the Detroit-Windsor International Freedom Festival fireworks. Detroit and Windsor jointly celebrate the multi-day festival the last week of June which draws about 3.5 million visitors during the week in order to commemorate each country's respective National holiday - (US Independence Day on July 4 and Canada Day on July 1). The festival began in 1959. It is organized by the Parade Company, a well sponsored not-for-profit organization governed by the Michigan Thanksgiving Parade Foundation.

Traditionally, several days of events were planned, ending with one of the world's largest fireworks displays,[7] sponsored by Target. In prior years, the fireworks display has been billed as the world's largest. On the Windsor side, there is a midway consisting of carnival rides and concessions during the festival. The Midway operates as stand-alone attraction at the end of June, beginning of July.

The Detroit Electronic Music Festival (DEMF) is an electronic dance music showcase held in Hart Plaza each Memorial Day weekend since 2000. In subsequent years, the similarly themed festivals Movement (2003–2004), Fuse-In (2005) and currently, Movement: Detroit's Electronic Music Festival (2006–present) continue the DEMF's traditions, with each name change reflecting shifts in festival management. All of these festivals featured performances by musicians and DJs, and emphasized the progressive qualities of the culture surrounding electronic music.

Belle Isle is a 982 acres (397 ha; 1.534 sq mi) island park in the Detroit River managed by the Detroit Recreation Department. It connects to the city by the MacArthur Bridge. It is home to the Anna Scripps Whitcomb Conservatory (1904), the oldest conservatory in the United States, the Detroit Yacht Club, the Detroit Boat Club, the Dossin Great Lakes Museum, a Coast Guard post, and a municipal golf course. The city still maintains a Nature Center where visitors are able to traverse wooded trails and view wildlife natural habitats. The island includes a half-mile (800 m) swimming beach.

Dequindre Cut Greenway is a non-motorized trail planned to extend from the Detroit River northward, with the future potential to connect to the Ferndale-Birmingham greenway in Oakland County. The mile (1.6 km) long trail will primarily connect the Lafayette Park neighborhood and Eastern Market to the Riverwalk . The greenway utilizes half of the corridor, with a 20-foot (6.1 m) wide paved path with separate lanes for biking and walking. The landscape anticipates future transit.[1]

Construction of phase I of the Dequindre Cut Greenway, extends from the River one mile (1.6 km) north to Gratiot Avenue, is complete. Funded by MDOT’s Transportation Enhancement Program and the Community Foundation of Southeast Michigan, this portion of the greenway sets the template for future phases and includes a 20-foot (6.1 m) bituminous path; access ramps for bicyclists, pedestrians and emergency vehicles; landscaping; lighting; signage and security cameras. The first phase of the trail officially opened May 14, 2009 with an opening ribbon-cutting ceremony at the Woodbridge Street entrance of the greenway between Orleans Street and St. Aubin Street.

The Dequindre Cut Greenway phase II North project begins at the northern terminus of the phase I at Gratiot Avenue and continues for over one-half mile to Mack Avenue. The strategic plan for phase II provides a design approach and project budget that builds on the lessons learned in phase I construction.

The Dequindre Cut is noted for the high quality graffiti covering the walls of the corridor. The Riverfront Conservancy which operates the greenway will permit current and future painted art work to remain as long as it is not deemed offensive. The trail is one of the city's few public art parks and is a major attraction for urban photographers.[1]