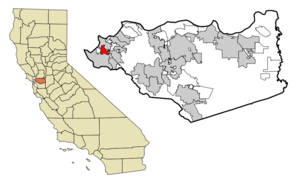 San Pablo is a city in Contra Costa County, , . The city of Richmond nearly surrounds the whole city. The population was 30,215 at the 2000 census.

The area in which today's San Pablo is situated was originally occupied by the Cuchiyun band of the indigenous people. The area was claimed for the king of in the late 1700s and was granted for grazing purposes to the located in today's San Francisco. Upon 's independence from Spain, church properties were secularized and in 1823, the area became part of a large grant to an ex-soldier stationed at the , Francisco Castro. The grant was given the name "Rancho San Pablo", thus originating the name for today's city as well as for one of the East Bay's oldest principal roads, today's (called in the prior Spanish era "El Camino Real de la Contra Costa").

A historic remnant of the city's Mexican era is preserved as a California State Landmark (No.512): the Alvarado Adobe, constructed in 1842 by one of Francisco Castro's sons, Jesús María Castro, for his mother, Gabriéla Berryessa de Castro. Upon Doña Gabriéla's death in 1851, it was inherited by her daughter, Martina Castro de Alvarado, wife of , who was Governor of California from 1836 to 1842. The Alvarado Adobe is located in the San Pablo Civic Center on the northwest corner of San Pablo Avenue and Church Lane.

San Pablo lies on a sedimentary plain between the northern end of the and , although the city limits do not extend to the bayshore. The city is traversed by two principal creeks, and , both of which originate in the ranges to its southeast. It is also traversed along its northeast limits by the , a major branch of the which lies to the west.