/mɑrˈtiːnɨs/ mar-tee-niss or /mɑrˈtiːnɛz/ mar-tee-nezz; Spanish: Martínez, meaning: Martinson) is a city and the county seat of Contra Costa County, California, United States.[2] The population was 35,824 at the 2010 census. The downtown is notable for its large number of preserved old buildings. Martinez is located on the south side of the Carquinez Strait in the San Francisco Bay Area, directly facing the city of Benicia.

In 1824 the Alhambra Valley was included in the Rancho El Pinole Mexican land grant to Ygnacio Martínez.[3] In 1847, Dr. Robert Semple contracted to provide ferry service from Martinez to Benicia, which for many years was the only crossing on the Carquinez Strait.[3] By 1849, Martínez served as a weigh station for the California Gold Rush. The town was laid out in 1849 by Col. William M. Smith and named for Martinez.[4] It became the county seat in 1850, but could not incorporate at the time because it lacked the 200 registered voters required, and only became a city in 1876.[5] 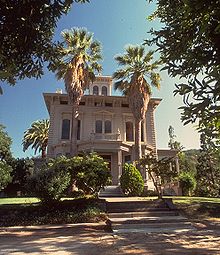 Martinez was the home of John Muir from 1880 until his death in 1914. He was buried about a mile south of the building that is now the John Muir National Historic Site. Also nearby is the Vicente Martinez Adobe, built in 1849 by the son of Ygnacio Martinez.[5]

In 1860, Martinez played a role in the Pony Express, where riders would take the ferry from Benicia (particularly if they missed the steamer in Sacramento).[6] In 1915, Shell Oil Company built an oil refinery near Martinez, which sparked a building boom in the area. A second area refinery[7] (presently owned by Tesoro Petroleum Co.), together with the Shell facilities, help make Martinez a significant petroleum processing center and port. Martinez's oil refineries can still be seen today from Interstate 680.

Martinez features in a folk etymology regarding the Martini cocktail.[8]

Although the common perception of Martinez is that of a refinery town, given the view from Highway 680 across the Shell refinery from the Martinez-Benicia Bridge, the city is in fact largely surrounded by water and regional open space preserves. The Martinez-Benicia Bridge carries Highway 680 across the eastern end of the Carquinez Strait to Solano County. The city can be defined as a more densely built downtown valley threaded by Alhambra creek and north of Highway 4. Suburban areas stretch south of Highway 4 to join the neighboring city of Pleasant Hill. Unincorporated areas include the rural Alhambra Valley and the Franklin Canyon area.

The Martinez Regional Shoreline bounds the city to the north along the Carquinez Strait. Carquinez Strait Regional Shoreline includes the Franklin Hills west of downtown, stretching west to the unincorporated community of Port Costa and the town of Crockett. Briones Regional Park borders the Alhambra Valley to the south. Waterbird Regional Preserve and the McNabney Marsh border the city and Highway 680 to the east. Martinez's location at the east end of the Carquinez Strait as it widens to Suisun Bay includes dramatic water views stretching to the Sierra range. From surrounding ridge tops views stretch to nearby Mt. Diablo, Mt. St. Helena, Mt. Tamalpais, etc.

Martinez is one of the only two places in the Bay Area, the other being Golden Gate Bridge, where the Bay Area Ridge Trail and the San Francisco Bay Trail converge. The Bay Trail is a planned recreational corridor that, when complete, will encircle San Francisco and San Pablo bays with a continuous 400-mile (640 km) network of bicycling and hiking trails. It will connect the shoreline of all nine Bay Area counties, link 47 cities, and cross the major toll bridges in the region, including the Martinez-Benicia Bridge. To date, approximately 240 miles (390 km) of the alignment—over half the Bay Trail's ultimate length—have been completed. The Bay Area Ridge Trail ultimately will be a 500+ mile trail encircling the San Francisco Bay along the ridge tops, open to hikers, equestrians, mountain bicyclists, and outdoor enthusiasts of all types. So far, over 300 miles (480 km) of trail have been dedicated for use. East Bay Regional Park District's Iron Horse Regional Trail will join the Bay Trail along the waterfront, and the Contra Costa Canal Trail threads through the city from Pleasant Hill to the south.

There were 14,300 households out of which 30.0% had children under the age of 18 living with them, 49.4% were married couples living together, 11.0% had a female householder with no husband present, and 35.6% were non-families. 27.4% of all households were made up of individuals and 6.9% had someone living alone who was 65 years of age or older. The average household size was 2.41 and the average family size was 2.96.

According to the City's 2009 Comprehensive Annual Financial Report,[14] the top employers in the city are: 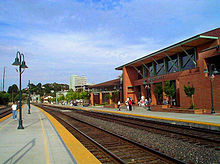 The Martinez Library of the Contra Costa County Library is located in Martinez.[15]

Beaver kits nibbling some food in Martinez. Courtesy Worth a Dam 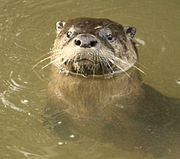 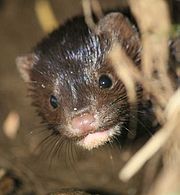 In early 2007, a group of beavers settled in a section of Alhambra Creek that flows through the city.[16] The beavers and their dam became a local attraction. Because the 6-foot-high (1.8 m), 30-foot-wide (9.1 m) dam created a potential flood hazard, local officials proposed to remove the beavers. Increased run-off from developed areas along the creek has increased flooding in Martinez, a low-lying city built on a flood plain, in recent decades. Although Martinez had completed the construction of a $9.7 million dollar flood control project in 1999, the downtown was flooded in 2005, ironically two years before the beavers arrived. A City Council subcommittee was formed to consider whether the beavers could be protected and flood risk managed, and was given 90 days to issue a report to the full council for a vote.[17] During this period, expert Skip Lisle was hired to install a flow device that could reduce the level of impounded water behind the beaver dam and mitigate flooding risk above the beaver dam.[18] The beavers have received national attention, amateur video coverage, a webpage devoted to them, and a new nonprofit organization ("Worth A Dam") formed.[19] The beaver have transformed Alhambra Creek from a trickle into multiple dams and beaver ponds, which in turn, led to the return of steelhead trout (Oncorhynchus mykiss) and river otter (Lontra canadensis) in 2008, and mink (Neovison vison) in 2009.[20][21] The beaver parents have produced babies every year since their 2006 arrival.[22] However, in June, 2010, after birthing and successfully weaning triplets this year (and quadruplets the previous three years), "Mom Beaver" died of natural causes.[23]

The Martinez beavers probably originated from the Sacramento-San Joaquin River Delta. Historically, before the California Fur Rush of the late eighteenth and early nineteenth centuries, the Delta probably held the largest concentration of beaver in North America. It was California's early fur trade, more than any other single factor, that opened up the West, and the San Francisco Bay Area in particular, to world trade. In 1840, explorer Captain Thomas Farnham wrote that "There is probably no spot of equal extent in the whole continent of America which contains so many of these muchsought animals."[24]